Statement by Deputy Executive Director of UN Women, Lakshmi Puri at the “A Women’s Place is in the World. Have Your Say on Beijing+20” conference held on 20 February, in Dublin.

I would like to start by expressing my gratitude to the Irish government, President Higgins, and the Irish Human Rights and Equality Commission, Chief Commissioner Ms. Logan, and all of you for having me here with you today, to participate in your national commemoration of the twentieth anniversary of the Beijing Declaration and Platform for Action. 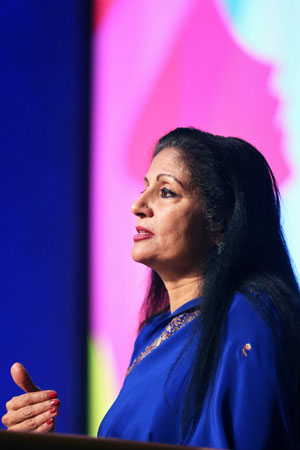 Lakshmi Puri, Assistant Secretary-General and Deputy Executive Director, UN Women speaks at the conference "A Woman’s Place is in the World! Have your say on Beijing+20" held at Dublin Castle in Dublin, Ireland on 20 February, 2015. Photo: Mark Maxwell

This year is a historic and game-changing year for the women’s rights agenda and the global development agenda.

As you know, 20 years ago, the world came together in Beijing for the Fourth World Conference on Women. In Beijing, China, 189 governments adopted the Beijing Declaration and Platform for Action, a fundamental roadmap for gender equality and women's empowerment and human rights.

This historic agreement articulated a vision where women and girls have equal rights, freedom and opportunities in all spheres of life and a life free from want, fear and violence. As a defining framework for change, the Platform for Action made commitments under 12 critical areas of concern. Even 20 years later, it remains a powerful source of guidance and inspiration.

Two years ago, in 2013, the UN Economic and Social Council (ECOSOC) tasked the Commission on Status of Women (CSW) to undertake a review and appraisal of the implementation of the Beijing Declaration and Platform for Action on the occasion of the twentieth anniversary of its adoption. This review and appraisal process has provided UN Women with an excellent opportunity to reinvigorate political will and recommitment, strengthen the evidence and knowledge base, enhance social and resource mobilization, and revitalize public engagement and solidarity around gender equality and women’s rights. As such, Beijing +20 has been a key corporate priority for UN Women.

And in less than one month’s time, and after nearly two years of work and commitment of UN Women, the Commission will be presented with the global 20-year review and appraisal of Beijing Declaration and Platform for Action. I invite you all, including President Higgins to take part in this historic and monumental occasion.

So, what is the global state of play in term of gender equality and women’s empowerment today as reflected in the 20-year review and appraisal of the Beijing Platform for Action?

The 20-year review report shows that in many parts of the world, the fulfilment of the human rights, opportunities and access to resources of women and girls have expanded significantly.

Globally, girls are now as likely as boys to be enrolled in primary education and significant progress has been made in girls’ enrollment at the secondary and tertiary levels.

Women’s voice, leadership, participation, and influence in political decision-making has increased, be it as Heads of State, Members of Parliament, or local representatives.

There has been an unprecedented level of legislative change, at the global, regional and national levels to address violence against women, the most tolerated human rights violations globally.

These advances would have been unthinkable without the persistent and creative social and political mobilization of feminists and women’s movements in all parts of the world, including in Ireland, in setting the agenda, pushing for change and holding governments to account for upholding women’s rights. In recognizing this, I would like to pay tribute to all those women feminists and the women’s movement who have dedicated their lives and their struggles to promote gender equality as the imperative of our times.

However, 20 years after the adoption of the Beijing Declaration and Platform for Action no country in the world that has achieved gender equality.

In many of the critical areas of concern the Platform for Action details, progress has been unacceptably slow and while opportunities have expanded for some women and girls in some parts of world, the most marginalized women and girls are being left behind. In particular, violence against women, in public spaces, in homes and in the workplace remains a global pandemic.

Several forces in the global political and economic landscape have held back progress on gender equality. Persistent conflicts, the world financial and economic crises, volatile food and energy prices, food insecurity and climate change have intensified inequalities and vulnerability, with specific impacts on women and girls.

Fragile gains towards gender equality continue to be threatened by rising extremism and backlash against women’s rights in many contexts. Deep-seated discriminatory norms, stereotypes, prejudice and violence remain pervasive and persistent, thus holding back women and girls from realizing their rights. Urgent and sustained actions are needed to transform the lives of women and girls. 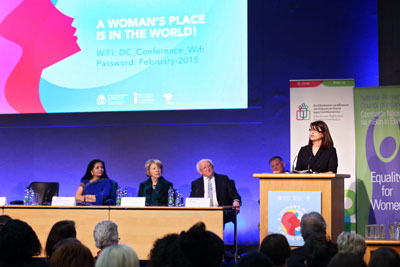 So what can we say about Ireland in the context of Beijing+20?

Ireland has made notable progress toward the promotion of gender equality and the empowerment of women in the past 20 years especially through strengthening legal frameworks, institutional mechanisms and leadership such as that of Mary Robison, first female president of Ireland, and now an international gender advocate in the climate change negotiations.

However, much like the rest of the world, Ireland has faced challenges toward the achievement of the Beijing promise. Violence against women, the underrepresentation of women in leadership and participation in government and the private sector – particularly gender segregation in the labour market, and the disproportionate level of unpaid care work provided by women to their families. There is also the issue of women’s rights to their bodies, and their right to decide freely and responsibly on the number and spacing of their children which needs to be ensured.

Now, what are we to do, to make sure that the promises that we made to women and girls around the world 20 years ago are achieved?

Over the last two years UN Women has strongly advocated for a transformative goal on gender equality and the empowerment of women in the post-2015 development agenda and sustainable development goals – which Irelands plays an important role as co-chair of the negotiations.

It is clear that urgent and sustained actions are needed to accelerate implementation by transforming the structures and institutions – economic, political and social – that are holding back progress on gender equality.

UN Women is pleased to see that the outcome of the Open Working Group on Sustainable Development Goals (SDG) and proposed SDGs includes a transformative stand-alone goal on gender equality and the empowerment of women as well as mainstreaming of gender equality across other goals. These set of goals address key structural constraints to gender equality, such as discrimination, violence against women and girls, ending harmful practices such as early, child and forced marriage and female genital mutilation (FGM), the unequal distribution of unpaid care work, lack of sexual and reproductive health and rights, lack of parity in decision making and universal access to sexual and reproductive health and rights.

I call on Ireland as a key negotiator in the post-2015 development negotiations to ensure that these transformative goals remind in the final outcome of the process.

We all have a responsibility to ensure that in the final set of Sustainable Development Goals maintains this goals and goes forward not backward on women’s rights.

We must maintain that the Convention on the Elimination of All Forms of Discrimination against Women (CEDAW), and the Beijing Declaration and Platform for Action is a baseline for actions required to achieve gender equality – and these are not negotiable.

In this context, the international community needs to guarantee that the ambition of the gender equality goal is matched by equally ambitious means of implementation.

We must work together with Member States and the private sector to ensure the adequate and predictable allocation of financial resources are granted to gender equality and women’s empowerment.

Women’s rights – as an agenda – has been chronically underfunded and we must change this if we are to achieve our joint goals for sustainable development.

This is the case even for UN Women which during 2012 to 2013, due to lack of funding, has experienced a USD 216 million shortfall in its budget – which negatively affected our ability to implement our mandate and Strategic Plan.

Therefore it is critical that legislation and policies be backed by adequate and predictable resources, and be fully enforced and implemented. As many economies around the world are emerging from the global financial crisis, I call on all stakeholders, including Ireland, to make gender equality a priority by matching your political commitment with financial commitment.

Never before in history has there been such strong recognition that gender equality and women’s empowerment is an enabler and force multiplier and a transformative force for sustainable development, peace and security resilience and the fulfilment of human rights. 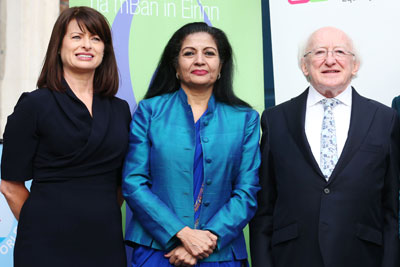 What else can we do?

We must all urge Member States around the world, including Ireland to “Step It Up” and make additional efforts, at all levels – nationally, regionally, and globally - to support the implementation of the Beijing Platform Action – especially addressing the gaps and challenges identified in the global review on implementation.

I am truly pleased to know that President Higgins has committed and joined UN Women’s Impact 10X10X10 initiative a part of UN Women’s HeForShe campaign, as one of your first Heads of State and Government.

As we know the engagement of men and boys and the achievement of gender equality and the empowerment of women is important to changing gender based stereotypes and changing institutional barriers toward equality.

In this context I would like to further invite Ireland’s private sector and universities to join our Impact 10X10X10 pilot initiative.

In September of this year, there will be another opportunity for Ireland to “Step It Up” for gender equality, during the UN Women and the People’s Republic of China’s co-organized and co-hosted Global Leaders’ Meeting on Gender Equality and Women’s Empowerment in September 2015 – ahead of the post-2015 Summit.

This will be the time to make these commitments known and truly “Step It Up” for gender equality and women’s empowerment toward a world where women and men are 50-50.

For Ireland it will be important that your related development processes as well as your cooperation for development policies be aligned with the processes of the United Nations to ensure the maximum amount of impact.

I call on you all to align with the current international discussions on the post-2015 development framework, Beijing+20 as well as the global review of Security Council resolution 1325 on Women Peace and Security – into the updating of Ireland’s National Women’s Strategy that will complete its term next year, in 2016.

The achievement of our joint goal of gender equality and sustainable development for all will require changes in the way institutions function and set priorities. It requires changes in the way women and men, girls and boys think and act – at work and at home. We all are called upon to finish the unfinished business.

We must make sure that the Beijing promise – we all promised 20 years ago is achieved for the women and girls around the world reach their fullest potential and fly.

Related News
19/02/2015
Beijing+20 event in Ireland: A woman’s place is in the world!
08/07/2013
Speech at the side-event organized by the Government of Denmark, on findings of the Global Thematic Consultation on "Addressing Inequalities"
18/05/2015
Gender equality related aspects of the post-2015 development agenda and trade and development policies – a speech by Lakshmi Puri
06/03/2015
“Gender equality is a shared vision of social justice and human rights” – Executive Director
02/03/2015
European Union to discuss women's economic empowerment through the lenses of post-2015 and Beijing+20
END_OF_DOCUMENT_TOKEN_TO_BE_REPLACED