Peoples’ march on 8 March: Take to the streets for gender equality and women’s rights

On International Women’s Day (8 March), the march for gender equality and women’s rights in New York City, will be organized by UN Women and the City of New York, together with the UN Women for Peace Association, NGO Committee on the Status of Women, NY (NGO CSW/NY), Man Up and The Working Group on Girls NGO. In November last year, the City of New York signed an MOU with UN Women and led our drive for cities all over the world to light up their landmark buildings in orange – including the Empire State Building and UN Headquarters – in a dramatic show of solidarity to end violence against women. 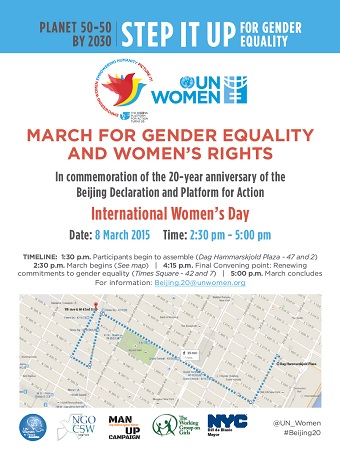 The march is part of UN Women’s Beijing+20 campaign “Empowering Women – Empowering Humanity: Picture It!” which celebrates the 20th anniversary of the historic Fourth World Conference on Women that took place in Beijing in 1995. Adopted by 189 countries at the Conference, the Beijing Platform for Action –considered the most comprehensive blueprint for advancing women’s rights– calls on governments to ensure equality and non-discrimination under the law and in practice.

Twenty years on, the Beijing promise is only partially fulfilled, and the 20th anniversary of Beijing opens new opportunities to galvanize political will, reconnect and mobilize the public.

The march will be held on Sunday 8 March 2015 and will run from 2.30 to 5 p.m. Participants will assemble at the Dag Hammarskjöld Plaza, at the corner of 47th Street and 2nd Avenue starting at 1.30 p.m. and end at Times Square, at the corner of 42nd Street and 7th Avenue, where they will collectively urge for renewed commitments to gender equality.