Against an orange stage, a powerful performance raises funds to end violence against women 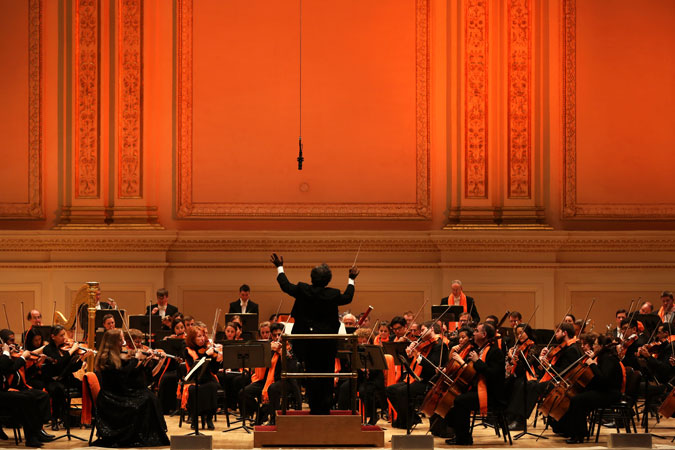 New York — With melodies ranging from ominous to melancholic to upbeat, it was a show as grand as the concert hall it graced. Donating their artistry to end violence against women, on 19 October 90 principal musicians from 40 of the world’s great orchestras, ensembles and academies performed at Carnegie Hall, which is regarded as the most prestigious concert stage in this hemisphere.

Set against the backdrop of an ornate stage lit in an orange hue, they were decked in black with a bright orange scarf to symbolize the cause of this special benefit concert. 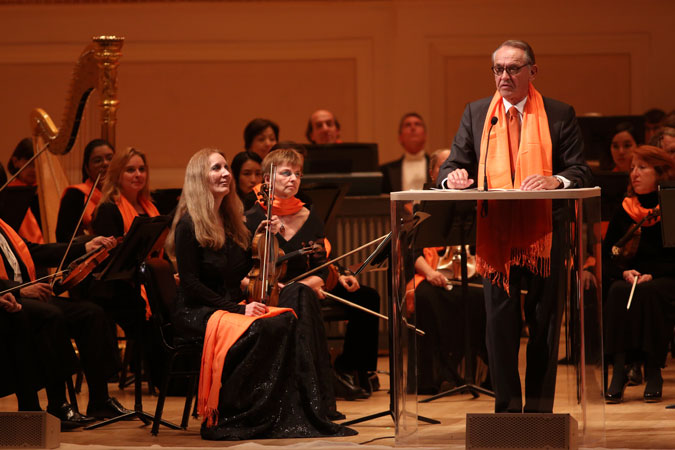 “Bright orange … is the colour of our UNiTE to End violence against women campaign,” said UN Deputy Secretary-General Jan Eliasson, in his opening remarks. “It is an optimistic colour, symbolic of a bright future and world where violence against women and girls has been eradicated once and for all. And it is the colour of this stage tonight and I would like to thank colleagues for making that possible. For me it also denotes the fiery determination that so many women and girls, activists, campaigners, community leaders, public figures and private individuals have shown as they have fought the scourge of violence against women. This evening we honour their courage and achievements.” 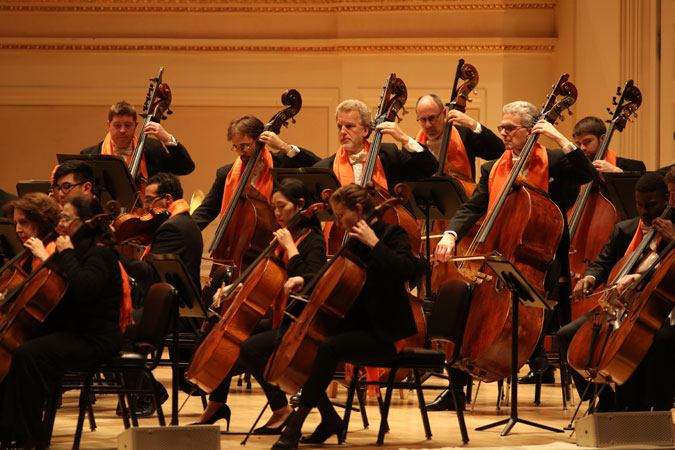 The evening marked the grand finale of the Scheherazade Initiative, a musical concert project which brings together global leaders in the artistic, musical and diplomatic communities to raise funds and public awareness of violence against women and girls. Created through a partnership between Music for Life International and the UN Trust Fund to End Violence against Women, the initiative uses the power of classical music to connect audiences around the world to the innovative and effective strategies pioneered by UN Trust Fund grantees to eliminate violence against women and girls. 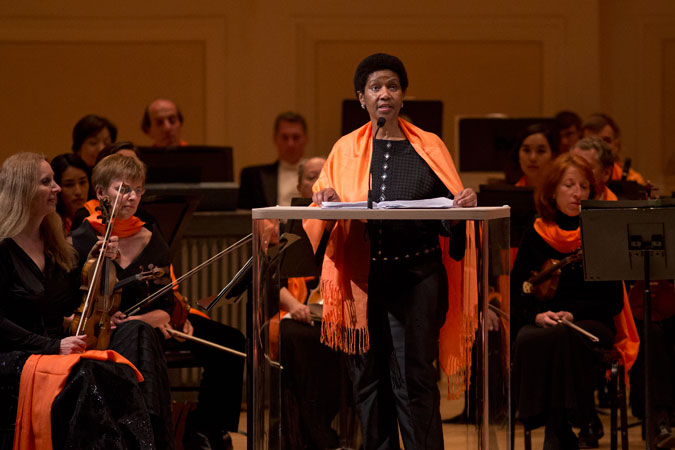 UN Women Executive Director Phumzile Mlambo-Ngcuka reminded the audience of the mission they were there to support: “The UN Trust Fund aims to erode unequal power relations and discriminatory social norms that fuel violence in our society, to find ways for men and boys to engage as champions for women and girls and to challenge the culture of silence that still too often surrounds the violence we are talking about tonight.”

The passion was palpable throughout the musicians’ powerful performance of the legendary story of Scheherazade, a courageous young woman who faces a murderous king but survives by telling a tapestry of stories known as theTale of the Thousand and One Nights. 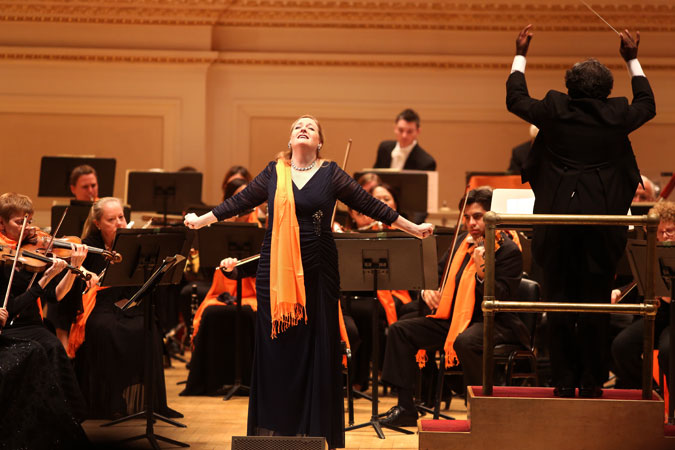 Mezzo-Soprano Susanne Mentzer captivated the audience with her vocal prowess during the first half of the programme. Photo: UN Women/Ryan Brown

“We want to tell the stories of the Malala Yousafzais, the Sheherazades, and even our own Susanne Mentzer, our Mezzo-Soprano, who is herself a survivor and a resilient one who has created a life of compassion, wisdom and extraordinary love in the face of unspeakable violence,” said Artistic Director and Conductor George Mathew. “Tonight, and with what we do, we who are in the business of making sound and giving voice, want to give voice to the most vulnerable among us.”

The star-studded ensemble was led by Concertmaster Elmira Darvarova—the first female Concertmaster in the history of the MET’s Opera Orchestra—who delivered a masterful performance with the quivering of her violin strings. 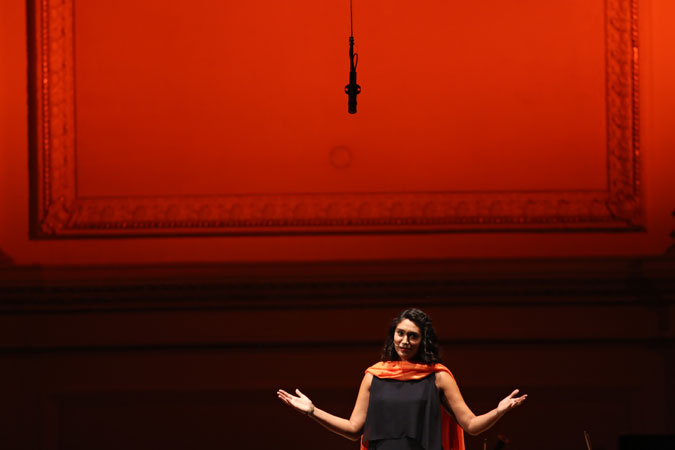 The evening also included a performance by spoken word poet Sarah Kay, who recited a heart-felt message to all women, including survivors or potential survivors, about their own strength and self-worth. “Let the statues crumble. … You are a woman who can build it yourself. You were born to build.”

The concert concluded with several minutes of standing ovation from a clearly satisfied audience, and the echoes of a final message from Artistic Director Mr. Mathew: “This is a fundraising concert to create actions. These actions are in your hands and I hope you will take them.”