New York — On 19 October 2015 at 8 p.m., principal musicians from the world’s great orchestras, ensembles and academies, will perform at Carnegie Hall, donating their artistry to end violence against women. 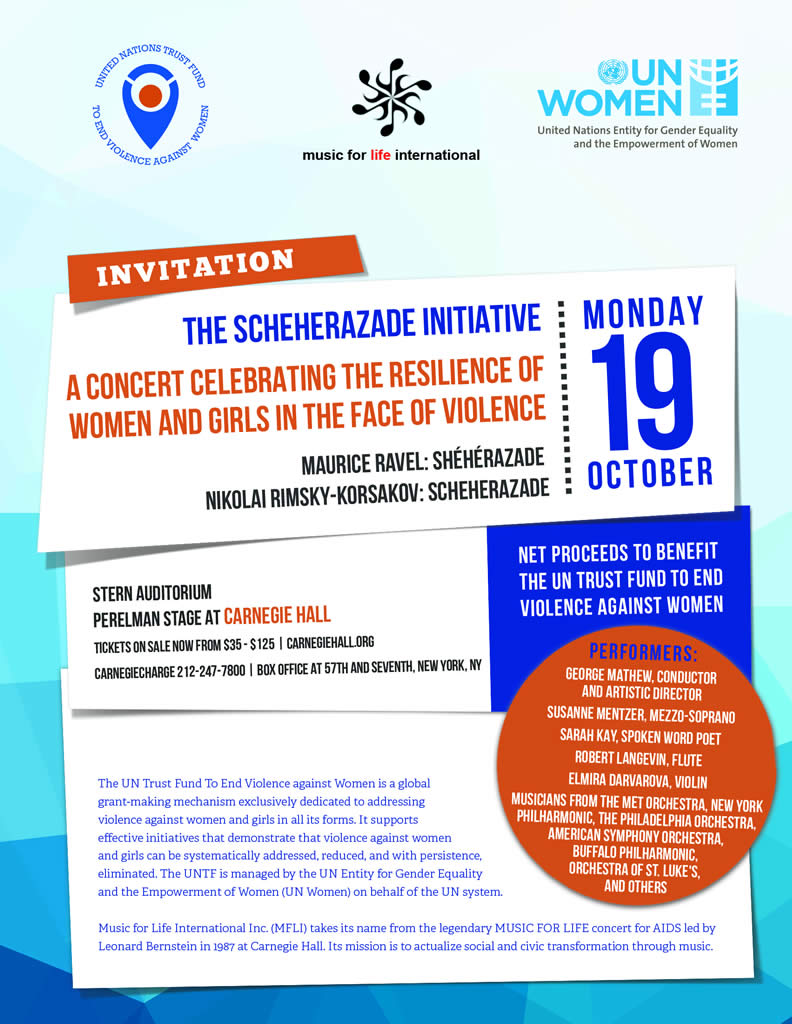 A star-studded ensemble will be led by Concertmaster Elmira Darvarova, who was the first female Concertmaster in the history of the MET’s Opera Orchestra. Also performing will be the distinguished Mezzo-Soprano and MET Opera star Susanne Mentzer, a powerful figure of resilience who is a survivor of domestic violence herself. She recently shared her story, “I’m Still Here,” in the Huffington Post, seeking to inspire other women in similar situations.

The benefit concert at Carnegie Hall is the culmination of a series of events in Washington D.C., New Delhi, and New York and will mark the grand finale of the Scheherazade Initiative, a musical concert project which brings together global leaders in the artistic, musical and diplomatic communities to raise funds and public awareness of violence against women and girls.

Created through a partnership between Music for Life International and the UN Trust Fund to End Violence against Women, the initiative uses the power of classical music to connect audiences around the world to the innovative and effective strategies pioneered by UN Trust Fund grantees to eliminate violence against women and girls. The Trust Fund is a leading global grant-making mechanism managed by UN Women on behalf of the UN system.

The event will serve as a tribute to the resilience of women, their families, and their communities in the face of violence as well as an urgent call to the global community to take action. The net proceeds will benefit the UN Trust Fund to End Violence against Women.

Are you in the New York area and would like to win a free pair of tickets from Music for Life for the concert on 19 October? We want you to tell us what orange outfit you would wear to Carnegie Hall if you won, and why you are taking a stand to end violence against women and girls.

This is how it works: