Remarks by UN Women Executive Director Phumzile Mlambo-Ngcuka, at the Open Debate on women, peace and security on 13 October 2015.

Today marks the first time, and a welcome opportunity, that a Head of Government is presiding over the Council’s meeting on women, peace, and security.

I thank His Excellency the President of Spain for chairing this debate today, for the priority Spain has given to this issue since joining the Council, and for Spain’s championing of gender equality for many years.

I also thank the UK for their leadership on Women, Peace and Security in this Council. 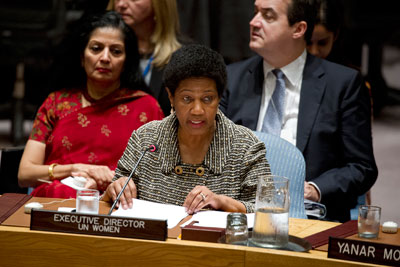 I would like to recognize our three civil society briefers, Julienne Lusenge from the Democratic Republic of Congo, Yanar Mohammad from Iraq, and Alaa Murabit from Libya.

The voices of women leaders and frontline activists for peace are rare in this forum. But I suggest they are the most important voices you will hear today.  Our work with human rights defenders has taught us that they are the true unsung heroes.

Friday’s announcement of this year's Nobel Peace Prize to the Tunisian National Dialogue Quartet underlined civil society’s vital contribution to promoting reconciliation and human rights and we celebrate this recognition.

Such peacemakers include the vibrant women's movement, who continue to work tirelessly to safeguard some of the gains of the Arab Spring and elsewhere, and realize justice and reconciliation through their active engagement in civic life.

In my first two years as Executive Director of UN Women, I have travelled and followed our work in displacement camps in Central Africa, Syrian refugee camps in Jordan, and to South Sudan, where the women peace activists shoulder the unseen burden of keeping communities together in the worst of times and under the worst of circumstances.

I have seen both the relevance of Security Council Resolution 1325 and conversely the many missed opportunities where it has not been put into effect, with dire cost.

More recently I have been to the Philippines and to Colombia where women continue to make extraordinary efforts to secure peace. Their presence at the table contributed to positive outcomes.  The agreements reached represent the interests of women, and of society as a whole.

UN Women is honoured to continue to support the formidable Colombian women.

Where women are at the peace table, they are able to make compromises that allow for faster progress, but not at the expense of core aspects of long-term sustainability.

In Colombia, where the talks are still ongoing, in the most recent agreement on justice, women have secured an agreement which states that there would be no amnesty for sexual violence crimes.

Extremist groups are targeting women’s rights as a deliberate, devastating method for subjugation and control.

We take this very seriously and we intend to continue to focus on it.

We therefore welcome the Secretary-General’s commitment in his upcoming Plan of Action to Prevent Violent Extremism to address women’s participation, leadership, and empowerment as keys to address the drivers of extremist violence.

We welcome also his call to extend the 15 per cent financing goal on peacebuilding within the UN to cover funds addressing violent extremism.

I would like to pay tribute to the work of the Secretary-General’s Special Representative on Sexual Violence in Conflict, Zainab Bangura, who has done much to raise the profile of this issue and ensure it is taken as seriously as it warrants.

A growing body of evidence shows that perhaps the greatest and most underutilized tool we have for successfully building peace is the meaningful inclusion of women.

This is the highlight finding of the global study that informs this high-level review.

The study found that women’s leadership and participation:

It is backed by extensive evaluations, statistical databases and academic research.

This is an area in which now the whole UN family, including the Security Council and Regional bodies, are confronted by the need to make irreversible change.

That change is to ensure that women are not the missing -- yet vital -- factor to make the lasting peace for which we all long and strive.

I am grateful to the study’s author, Radhika Coomaraswamy, and the members of the High Level Advisory Group of the Global Study for their time and dedication. They often went beyond the call of duty.

I also thank DPA and DPKO and all of the UN partners for their increased efforts to support gender equality.

Let us now turn to some of the detail of the report of the Secretary-General, which I have the privilege to present to you today on his behalf.

It recognizes several markers of progress.

Between 1990 and 2010, only 11 percent of peace agreements even mentioned women or gender issues.

In recent years, this has climbed to half of all agreements, and the percentage is higher when the United Nations is involved.

There are more women in mediation support teams and more regular consultations with civil society leaders.

Courts and commissions of inquiry are paying more attention to gender-based crimes, even though this has not yet translated into higher levels of prosecution.

I welcome the Secretary-General’s invitation to review the gender-related implications of all three reviews before the end of the year.

But the report also notes many areas of concern and stagnation.

Fifteen years on, it finds that political will, financing, accountability, attitudinal and institutional barriers, as well as a lack of expertise and awareness continue to be obstacles.

Women’s participation is still symbolic or low at peace tables. This is as unreasonable as peace tables that exclude men.

Donors do not go far enough to target women’s organizations with support.

Yet it is their dedication to peace that has proven to be the only way that women’s needs are noticed and serviced.

In fact only two per cent of aid to peace and security interventions in fragile states targets gender equality as a principal objective.

Gender equality is almost completely ignored in reforms of the security sector even in the most gender-aware nations.

This is a space that is in need of role models.

We need many more women in police forces, military forces, and our peacekeeping operations to enhance our operations and peace efforts.

Further, alarmingly, the percentage of girls in secondary education in conflict countries has dropped, and rates of maternal mortality in these settings are more than double the global average.

In the midst of the biggest wave of displacement on record, with countless families torn apart or separated, 27 countries still have nationality laws that discriminate against women contributing to stateless children.

For example, we spend more than 9 billion dollars a year on our peacekeeping and special political missions, but we are currently unable to track how much of it is invested in advancing gender equality.

And there are still cases of sexual exploitation and abuse in our missions.

We are thankful that the Secretary-General has again been raising the alarm over the unacceptable price of inaction on this issue.

On a positive note, I am pleased to announce the establishment of the Global Acceleration Instrument on Women Peace and Security and Humanitarian Engagement.

I invite all countries to support it, as one concrete way to respond to the study.

As part of the paradigm shift that can be associated with the study findings let us note for action:

That the study shows the benefit of investing in preventive action: early warning rather than retaliatory action.

Military spending has a direct impact on increased suffering of women for generations.

Militarization is on the rise and the global cost of violence is estimated at over 14 trillion dollars.

That we must have faith in our original vision for resolution 1325 -- not to make armed conflict safer for women and girls, but to prevent war in the first place.

Our challenge now will be taking steps toward proper funding and execution of the study’s ambitious targets.

Many of the much-needed changes are in the hands of the Member States in this room.

As I close, let me remind you of the inescapable logic of the study’s findings, reflected in the Secretary-General’s report, and which should galvanize us to action.

These are some key areas:

As we look forward now to implementing the new 2030 Agenda for Sustainable Development, we should recall the strong interdependence between all the goals.

Goal 16, of “Just, peaceful and inclusive societies” is intrinsically linked with goal 5 to “Achieve gender equality and empower women and girls”.

Related News
29/10/2015
Our focus should not just be on what women can do. It is also on what men can do — Executive Director
14/10/2015
Turn words into action involving women for lasting peace
14/10/2015
Statement by UN Women on the adoption of Security Council resolution 2242 on women, peace and security
12/01/2014
Promoting Syrian Women’s Engagement in the Syrian Political Process
14/05/2013
In the words of Saran Keïta Diakité: Girls receive a visit from a different man every night, a ‘new husband’
END_OF_DOCUMENT_TOKEN_TO_BE_REPLACED