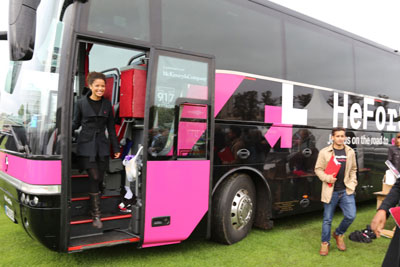 The magenta and black HeForShe bus visits universities in the United Kingdom as part of UN Women’s #GetFree University Tour.

Since the HeForShe launch at the United Nations on 20 September 2014 by UN Secretary-General Ban Ki-moon and UN Women Global Goodwill Ambassador Emma Watson, hundreds of thousands of men from around the world including Heads of State, CEOs, and global luminaries from all walks of life have committed to gender equality. 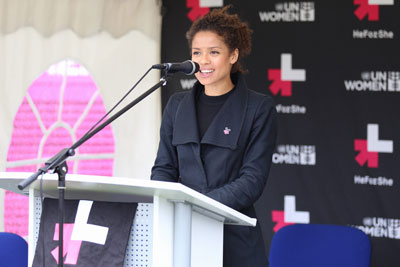 British actor and women’s rights advocate Gugu Mbatha-Raw reflected on her own experiences in the film industry and her personal commitment to gender equality at Cambridge Universitys "freshers fair."

Speaking to a crowd of dedicated students at the Cambridge University's "freshers fair", British actor and women’s rights advocate Gugu Mbatha-Raw delivered keynote remarks, reflected on her own experiences in the film industry and her personal commitment to gender equality, telling an inspiring story about the ways our fears can in fact become our greatest assets. She concluded with an impassioned plea to students to "change the course of gender equality."

Since the launch of the HeForShe campaign, over 200 HeForShe Student Associations have emerged in universities around the world. The first-ever HeForShe #GetFree University Tour began this autumn, bringing the conversation to 20 institutions in the US and Europe. In its first week, the tour visited the University of Nottingham and University of Leicester, in the United Kingdom, and Sciences Po, in Paris. In 2016, the Tour is expected to bring the global conversation on gender equality to universities across Africa, the Middle East, South Asia and Latin America.

Related News
31/05/2018
Dads from Moldova: A photo exhibit that challenges stereotypes, showing men alone with their kids
15/11/2017
From where I stand: “Ending violence against women and girls is hard work, but it’s not impossible“
26/10/2016
In Albania, football and a mobile app get men to commit to gender equality
17/08/2016
HeForShe campaign launches in Cameroon
30/06/2016
“Gender mainstreaming is no longer an option, it is an imperative” — Lakshmi Puri
END_OF_DOCUMENT_TOKEN_TO_BE_REPLACED