In the words of Alaa Murabit: The overlooked tool in efforts to prevent conflict 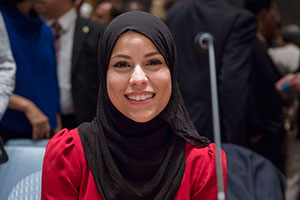 Dr. Alaa Murabit, 25, is the founder of the Voice of Libyan Women, a women's empowerment and development organization which focuses on women, peace and security through both practical on-the-ground measures as well as legal and policy change. She is a member of the High-Level Advisory Group for the Global Study on the implementation of Security Council resolution 1325 — commissioned by the UN Secretary-General for which UN Women is the secretariat. She is also a youth representative on UN Women’s Global Civil Society Advisory Group. She addressed the Security Council Open Debate on Women, Peace and Security on 13 October, as one of three civil society guest speakers. Read her speech.

A few weeks prior to the Open Debate, she wrote the following opinion piece:

My younger sister, with the common sense only children have, asked me about the Syrian conflict years ago: “If everyone didn’t give them so many weapons, wouldn’t it be harder for them to have a war?”

The short answer is of course, “Yes.”

My sister’s incisive question reminded me of the millions of other questions about the failures of the international community to prevent war, many of which I had been asking myself — and anyone else who was willing to listen — for years. What is the point of multilateral systems if unregulated militarization continues to go unchecked and world powers sit by while unstable areas are flooded with weapons?

These thoughts again came to mind earlier this month, when the lifeless body of 3-year-old refugee Aylan Kurdi was found awash on Turkish shores. (I will be the first to admit that upon hearing the news, I hugged and kissed my 2-year-old nephew more than usual as I put him to sleep that evening). The young boy and his family, like millions of others, were fleeing from Syria’s armed conflict, a war that international and regional powers have done very little to mitigate.

This October, the U.N. Security Council will convene a high-level review of issues concerning women, peace and security around the globe. As a part of the review, a global study will be released, which surveys more than a decade of advancements and gaps in the implementation of UNSC resolution 1325, which recognizes the necessity of women’s participation in conflict prevention and peacebuilding to achieve global peace and security.

The global study comes at a time when the international community desperately needs to use every strategic tool at hand to prevent the devastation caused by armed conflict. While contributions of local women and youth are substantial to diffusing conflict and countering violent extremism on a daily basis, they continue to be sidelined in conflict prevention strategies, and even within the U.N. itself — “women’s empowerment teams” in political missions are frequently sidelined and command very little respect or resource.”

Related News
19/06/2020
Connected by their phones, women peacebuilders lead COVID-19 prevention efforts across Libya
29/10/2019
Statement by Alaa Salah at the UN Security Council Open Debate on Women, Peace and Security
19/10/2017
From where I stand: “Women are the leaders of today”
21/09/2016
From where I stand: Monira Hwaijeh
23/11/2015
Libyan women forge agenda for peace
END_OF_DOCUMENT_TOKEN_TO_BE_REPLACED