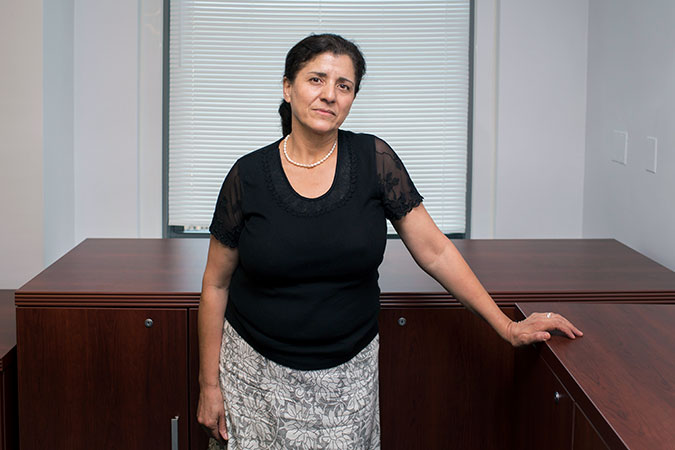 First, I had to stop working because we couldn’t access the communities in the suburbs of Damascus once the conflict started. Then, I lost all my friends. None of them are left in Syria—they have either left the country or are in prison. My daughter too had to leave Syria for her safety. I lost the simple things that I took for granted—electricity, water, leisure time and the simple happiness of everyday life.

Back in 2012, when the peace process for Syria started, there were no women involved at any level. This year, with the establishment of the Syrian Women’s Advisory Board, we can advise the UN Special Envoy for Syria on the peace process.As members of the Women’s Advisory Board, we come from diverse and opposing backgrounds, but we were able to build consensus based on our common agenda for peace. For example, while the issue of the kidnapped and the imprisoned remain contentious among the negotiating delegations, all members of the Women’s Advisory Board—those who were pro-regime and those who were aligned with the opposition—have agreed and recommended that both the kidnapped and the imprisoned must be released.

We have a long way to go, but the only way forward is through the political process. The peace negotiations must resume, and women must be able to influence the decisions.”

Monira Hwaijeh, 58, is one of the 12 members of the Syrian Women’s Advisory Board (WAB), established by the UN Special Envoy for Syria earlier this year. Coming from diverse backgrounds, the independent civil society representatives that make up WAB, consult regularly with the Special Envoy and provide recommendations to assist the peace talks. On 31 August, 2016, Ms. Hwaijeh, along with other members of WAB, spoke at a panel event organized by UN Women where they shared their experience and recommendations for lasting peace. Prior to the conflict, Ms. Hwaijeh worked to change discriminatory laws against women and with communities near Damascus to protect women’s rights. Today, her work on peacebuilding contributes directly to Sustainable Development Goal 16, which seeks to promote peaceful and inclusive societies.