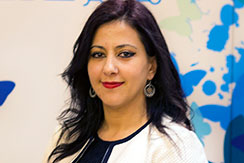 Hiba Qasas is Programme Advisor and Head of the Arab States Section for UN Women. A Palestinian national, with more than 15 years of experience in development work within the UN system and NGOs in the Middle East and North Africa region, she joined UN Women in 2011. She holds a Masters in International Cooperation for Development from the University of Pavia, Italy.

Syria, once a cradle of civilization, a country known for its rich history, the kindness and hospitality of its people and unmistaken beauty, continues to be blighted by violent conflict and terrorism. The brutal conflict, now in its fifth year, has taken its’ toll on the Syrian people. Almost half the country’s population has been forced to flee the violence, making the conflict the world’s single-largest driver of displacement.

The statistics are staggering: 4.7 million refugees; 6.6 million internally displaced; 13 million in need of assistance; 250,000 people killed. This violent conflict has not spared any Syrian the pain of loss—a schism to the fabric of society leaving scars and deep wounds that will take years to heal.

We know that violent conflicts often have a disproportionate impact on women and girls. Women and girls are at greater risk of sexual violence, exploitation, trafficking, and early and forced marriage. We have seen in Syria, and to a similar extent Iraq, that as extremist groups such as ISIL have increased in influence, their territorial advances have been coupled with targeted, strategic attacks on women’s rights and freedoms in particular, including a pattern of sexual slavery, abduction and human trafficking, and gross human rights violations.

Having painted this sobering picture, we also recognize that while women face heightened vulnerability in the context of crisis and bear the brunt of violent conflict, women are not only victims, but also leaders in their own right. Since the beginning of the crisis, Syrian women have been inspiring examples in their resilience and determination. They started organizing at the community level in relation to humanitarian needs, forming networks and coalitions in response.

But this early organizing did not easily translate into a voice at the international level, or among key parties to the conflict. Women’s groups were initially divided and without a common agenda.

The political process started with Geneva I in 2012. Contrary to the international commitments laid out in UN Security Council resolutions 1325 and 2122, women were largely absent from the political process whether in terms of representation on official delegations or as civil society representatives. Therefore, Syrian women asked us for support to help them organize and rally the diverse women’s networks, coalitions and activists around a common agenda.

By Geneva II in January 2014, Syrian women were still under-represented in official delegations. However, we were determined to support by amplifying Syrian women’s voices. Alongside the Government of the Netherlands, we held the first high-visibility conference in January 2014. The Syrian women presented an outcome statement to the Joint Special Envoy Lakhdar Brahimi, which outlined their unified vision and concrete recommendations for the political process. This launched the Syrian Women’s Initiative for Peace and Democracy (SWIPD)—a group of diverse women civil society activists who committed to work together to support efforts for a political solution and a greater role for women in the political process.

Following three years of determination by Syrian women, joint advocacy, coalition and capacity-building, in February 2016, Special Envoy De Mistura formed a Women’s Advisory Board to engage in the political process, which includes 12 members, half are whom are members of the SWIPD. With the technical and logistical support of UN Women, the Women’s Advisory Board continues to represent Syrian women as civil society actors and has been engaging in Geneva III talks with the Special Envoy to amplify the voices of the women’s movement, to discuss negotiating issues and raise key matters missing from the agenda. Women’s representation on official delegations has also increased, although at close to 20 per cent, it continues to fall short of the 30 per cent target.

As part of our latest efforts towards building the broadest possible women’s coalition for peace, we convened the “Syrian Women Peacemakers” conference, which brought together the most diverse and representative group so far in terms of allegiances, ethnicities, religious backgrounds, age and geographic distribution, with members of SWIPD and the Women Advisory Board to the Special Envoy. Over 130 Syrian women, including political and civil society activists, came together in Beirut from 20-22 May and forged a statement of unity, despite significant political divides.

This latest effort opens a new era of engagement for the Syrian women’s movement, as they work together towards a greater role and representation for women in the political process and forming a strong coalition for peace on the ground.

As part of the UN Women team who has been engaged in this endeavor for the past three years, I can share what we’ve seen as the key ingredients for success in this type of work:

The resilient Syrian women are a potent asset for peace, we stand with them in solidarity and behind them with support for the long haul.

Read more about UN Women’s work in response to the Syria crisis.