UN Commission on the Status of Women adopts declaration to accelerate action on 20th anniversary of Beijing World Conference on Women.

New York—Government ministers and representatives today issued a political declaration with actions to achieve gender equality and women’s empowerment by 2030, including through significantly increased investment to close existing wide shortfalls. 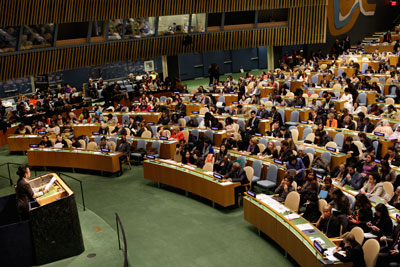 Member States issued a political declaration at the opening of the 59th Commission on the Status of Women on 9 March. Photo: UN Women/J. Carrier.

Issued during the 59th session of the UN Commission on the Status of Women, the political declaration marks the 20th anniversary of the 1995 Beijing World Conference on Women and its landmark Platform for Action.

The political declaration highlights UN Women’s central role in rallying countries, the UN system, civil society, businesses and others around the common goal of gender equality.

It also emphasizes the essential roles of men and boys, and the contributions of civil society.

Also expressed was concern with the slow and uneven rate of progress since the Platform for Action detailed comprehensive commitments on 12 issues critical to gender equality. The global review, detailed in a report by the UN Secretary-General refers to areas of stagnation and regression. It is based on national reviews conducted by an unprecedented 167 countries, drawing on rich consultations from governments and civil society.

While 189 countries endorsed the Platform for Action, 20 years later, no country has achieved gender equality. At the current pace of change, it will take 81 years to achieve gender parity in economic participation, for example, and 50 years to reach parity in parliamentary representation.

In adopting the political declaration, Member States agreed that full, effective and accelerated implementation of the Platform for Action will be essential to the post-2015 sustainable development agenda. Expected to encapsulate all major issues of global progress for the next 15 years, the agenda is expected to be adopted by Heads of State and Government from every part of the world at a historic summit in September 2015.

“The disappointing gap between existing commitments and their implementation points to a collective failure of leadership,” says UN Under-Secretary-General and UN Women Executive Director Phumzile Mlambo-Ngcuka. “The declaration says we will not continue to let down the women and girls of the world. It is time to step up commitment and action.”

Learn more about the Commission on the Status of Women.

Related News
09/03/2015
“In 2030 we want to be able to talk about a world that has achieved gender equality” – UN Women Executive Director
06/03/2015
Press conference: "Collective failure of leadership on progress for women"
09/03/2020
Opening statement by Under-Secretary-General of the United Nations and Executive Director of UN Women, Phumzile Mlambo-Ngcuka, at the 64th session of the Commission on the Status of Women 9 March 2020
24/03/2016
Closing remarks to the 60th session of the UN Commission of the Status of Women, 24 March 2016
17/03/2016
Press release: “We need to challenge folks to step up,” says Canadian Prime Minister at UN Women event
END_OF_DOCUMENT_TOKEN_TO_BE_REPLACED