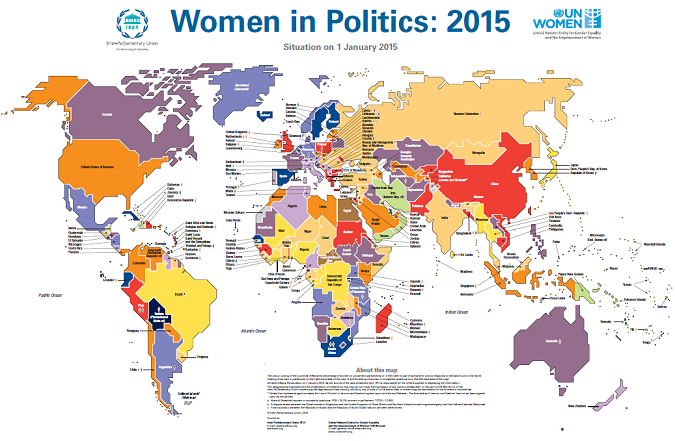 Geneva/New York — The Women in Politics 2015 Map launched by the Inter-Parliamentary Union (IPU) and UN Women today shows that although the numbers of women in executive government and in parliament continue to inch forward, the slow rate of progress will severely check global development plans due to be adopted later this year.

Women’s political empowerment and equal participation in political decision-making have underpinned global development targets since 1995 and are likely to feature in the new sustainable development agenda taking over from the Millennium Development Goals this year. The snail’s pace of progress on gender equality and women’s participation in public and political life will need to be tackled head-on for the overall success of the new goals.

The Map, which presents latest data and global rankings for women in politics, reveals a mixed picture on gender equality in executive government and in parliament at regional and national levels.

“All progress is welcome. But our data is uncompromising in its truth. We are a long way from where the world needs to be on gender equality and women’s political participation,” said IPU President Saber Chowdhury. “This data should be a wake-up call to mobilize political will to change mindsets and take action that will spur progress on this issue.”

Thirty countries currently have 30 per cent or more women ministers with Finland, Cabo Verde, Sweden, France and Liechtenstein occupying the top five places in IPU’s global rankings respectively. Although this figure has dropped from 36 countries in 2014, there was some good news at the other end of the table. There are now only eight countries with no women in government (Bosnia Herzegovina, Brunei, Hungary, Pakistan, Saudi Arabia, Slovakia, Tonga and Vanuatu).

The countries that saw the largest decreases between 2014 and 2015 were Peru, Malawi, Denmark, Belgium and Paraguay, with losses ranging from two to six women ministers.

Regionally, the Americas continue to have the highest percentage of women ministers at 22.4 per cent, with Europe and Africa in second and third places. However, both the Americas and Africa lost ground in the past year with figures dropping by 0.6 and 0.5 percentage points respectively.  At 19.8 per cent, Africa is now just above the level it had reached in 2010. After years of progress followed by stagnation, the numbers of women ministers and MPs have fallen, and are a cause for concern.

The Arab, Asia, Europe and Pacific regions have encouragingly reached their highest numbers ever for women ministers. In contrast to its regional ranking for women in parliament which places it last, the Pacific has the fourth highest regional average (13 per cent), followed by Asia (10.6 per cent) and the Arab world (9.5 per cent).

The IPU-UN Women Map, supported by the Irish development agency Irish Aid, also sheds light on trends and developments in ministerial portfolios held by women. Although social affairs, education, family and women’s affairs continue to be the most common portfolios held by women ministers, and the numbers of women holding posts considered more senior such as defence, environment and foreign affairs have grown slightly, there are now fewer women ministers for finance and budget or home affairs than in the year before.

The Map also highlights the progress and setbacks on women in parliament. IPU data shows that more countries than ever before (48) have 30 per cent or more women members in at least one parliamentary chamber, up from 46 in 2014 and 42 in 2013. The global average for women MPs also reached its highest-ever level to above 22 per cent. However, that growth was a disappointing 0.3 percentage points and followed the record level of increase (1.5 points) during 2013, suggesting that the impact of quotas was wearing off.

At political leadership level, progress was more encouraging. The number of women Heads of State and/or Government in the world regained a previous peak of 19. Women also account for 15.8 per cent of all Speakers of Parliament, an increase of one full percentage point during 2014 and double the rate of growth for women MPs the previous year. Nevertheless, the figure lags far behind that of women MPs and is a long way from parity.

The Executive Director of UN Women Phumzile Mlambo-Ngcuka called for renewed commitments and investments to meet the Beijing Platform for Action’s now 20-year-old target of gender balance. “If today’s leaders front-load gender equality, if they start now to make good on those 20-year-old promises, we can look forward to gender equality by 2030 at the latest.”

Europe is the only continent to reverse the general trend and show an increase in the total number (9) of women Heads of State and/or Government. The Americas remain unchanged with six executive Heads as do the Arab and Pacific regions with zero women at the highest level of political office. Africa and Asia both saw a drop from three to two each.

The most significant drop in women ministers was in the Nordic sub-region. It saw a drop from 48.9 per cent in 2014 to 46.4 per cent in 2015 in women’s share of ministerial positions.

Belgium witnessed the biggest loss in percentage points. From having 41.7 per cent women ministers, it now has 23.1 per cent.

The Arab region continued to show progress, increasing its share of women ministers to 9.5 per cent, i.e. almost one in 10 of all ministers.

Algeria experienced a 7.9 percentage point increase in its number of women ministers – now with six instead of four women ministers. By losing three of its women ministers in the past year, dropping from 14.8 per cent to 4.5 per cent, Bahrain saw the biggest decline in the Arab world.

Asia reversed the significant losses in women ministers between 2012 and 2014 to reach its new record level of 10.6 per cent, although it ranks second lowest in the regional averages.

Japan is now a little closer to fulfilling Prime Minister Abe’s pledge of reaching 30 per cent on women’s representation by 2020. There are now four women ministers out of 18, up from two in 2014.

In Africa, Cabo Verde, Rwanda and South Africa continue to feature in the list of countries where women account for more than 30 per cent of ministers in the cabinet. In absolute numbers, South Africa has the largest number of women ministers – 15 accounting for 41.7 per cent of all ministers.

In the Pacific, the Solomon Islands got its first female minister in the past 10 years while both Tonga and Vanuatu scored a double negative by not having a single woman in cabinet or in parliament.

The Americas maintains its lead as the region with the highest average of women MPs at 26.4 per cent. Bolivia is the highest-placed country from the region on IPU’s world rankings at number two with 53.1 per cent.

Although Africa kept its position as the region with the third-highest average, it lost ground on the percentage of women MPs (and women ministers).

By 2015, there were two Arab countries with women accounting for more than 30 per cent of all MPs – Algeria and Tunisia.

Japan’s increase of 1.6 percentage points in the number of women MPs was the highest seen in Asia in the past year and underlines the continually low level of progress in the world’s most populous region.

Europe ranks the second highest in regional averages with the Balkans sub-region registering the greatest progress on the continent during 2014.

The Pacific remains the region with the lowest average of women MPs. New Zealand is the only Pacific country to have more than 30 per cent women MPs while Fiji was the notable success in the region in the past year with women being elected to 16 per cent of the parliamentary seats.