Press release: One in five ministers is a woman, according to new IPU/UN Women Map

Women’s representation in political decision-making continues to rise slowly, with slight improvements since 2017, according to the data presented in the 2019 edition of the biennial IPU-UN Women map of Women in Politics. The map was launched at a press conference during the Commission on the Status of Women (CSW 63) at the United Nations headquarters in New York. 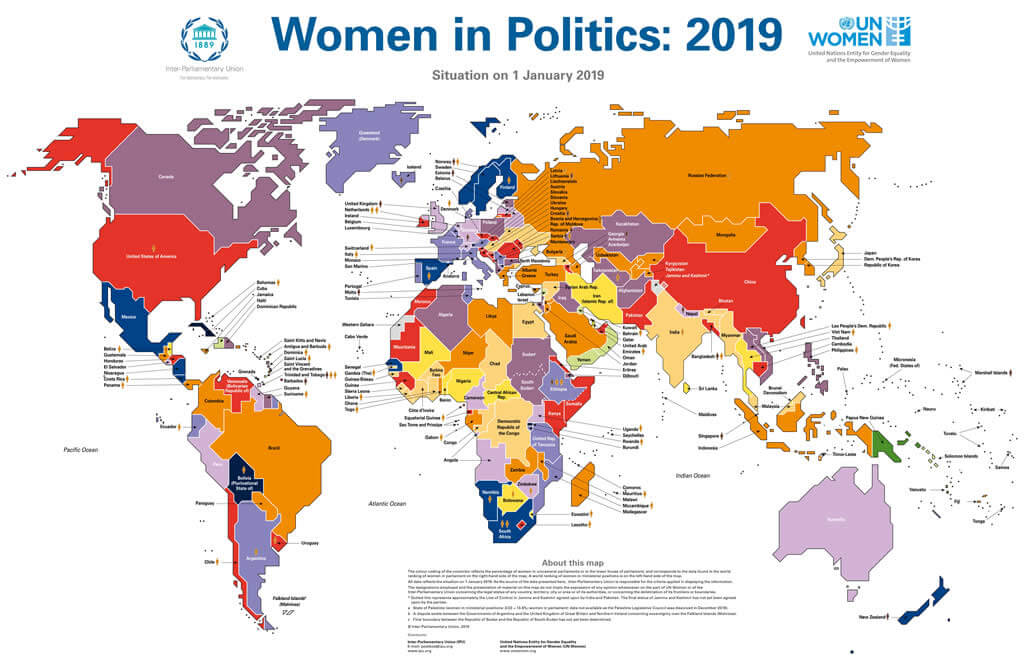 The map, which presents global rankings for women in the executive and parliamentary government branches as of 1 January 2019, shows the proportion of women ministers is at an all-time high at 20.7 per cent (812 out of 3922), 2.4 percentage points higher compared to 2017. It also shows that the types of portfolios women ministers hold are diversifying.

IPU President and Mexican MP, Gabriela Cuevas Barron, said: “Equal representation in government positions is fundamental for a democracy to be truly representative and effective. Despite some positive movement, the overwhelming majority of government leaders remain male. It is a shared responsibility between men and women to change this and ensure gender equality at all political levels. It is important to identify the main barriers that are stopping women from accessing decision-making positions.”

“More women in politics leads to more inclusive decisions and can change people’s image of what a leader looks like,” said UN Women Executive Director Phumzile Mlambo-Ngcuka. “We still have a steep road ahead, but the growing proportion of women ministers is encouraging, especially where we see a rise in the number of countries with gender-balanced ministerial cabinets. These are the types of bold moves that we need if we are to dramatically increase women’s representation in decision-making.”

Nine countries, up from six in 2017, have 50 per cent or more women in ministerial positions.

Strongest gains in the share of women cabinet ministers

Ethiopia saw the largest increase in women's political representation in the executive, from 10 per cent women ministers in 2017 to 47.6 per cent in 2019.

Mexico made the biggest strides in the Americas, with the addition of 5 women ministers, increasing the overall share of women ministers by 26.3 percentage points to 42.1 per cent.

In the Middle East and North Africa, Mauritania maintains the largest share of women ministers in the region at 31.8 per cent, with the UAE following closely at 29 per cent.

In the Pacific region, Palau gains two female ministers, and Tonga one.

In Europe, Slovenia dropped the most percentage points since 2017 from 50 per cent to 25 per cent women ministers. Lithuania no longer has women in ministerial positions, compared to 2017 when there were three out of 14, or 21.4 per cent.

In Asia, the share of women ministers in the Philippines decreased by 14.7 points to 10.3 per cent. Japan lost two female ministers, leaving one woman out of 19 cabinet ministers, or 5.3 per cent.

Countries with no women ministers

The number of countries with no women ministers decreased from 13 in 2017 to 11: Azerbaijan, Belize, Brunei Darussalam, Iraq, Kiribati, Lithuania, Papua New Guinea, Saint Vincent and the Grenadines, Saudi Arabia, Thailand and Vanuatu.