UN Secretary-General’s report stresses that progress towards women’s rights and empowerment has been unacceptably slow, with stagnation and even regression in some cases. 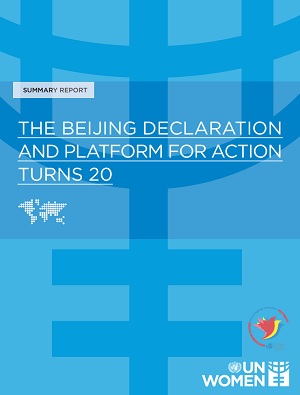 To be presented at the opening of the Commission on the Status of Women on 9 March, today UN Women Executive Director highlighted the key findings of the new report The Beijing Declaration and Platform for Action turns 20, which sheds a critical light on how far we’ve come 20 years after the adoption of this landmark blueprint for advancing women’s rights.

As part of the 20th anniversary of the Beijing Platform for Action, UN Women undertook a global review and appraisal of its implementation around the world. These findings are reflected in the new Secretary-General's report on the 20-year review and appraisal of the implementation of the Beijing Declaration and Platform for Action.

Noting areas of progress and remaining gaps, the report reveals that improvements have been unaccept­ably slow, with stagnation and even regression in some cases. Progress has been particularly slow for women and girls who experience multiple and intersecting forms of discrimination.

Tackling inequalities and multiple forms of discrimination must be a priority, the report stresses, and global citizens must get involved, looking beyond the “averages” to monitor the impacts and results of laws and policies for women and girls.

The report concludes that urgent action is required in five priority areas: transforming discriminatory social norms and gender stereotypes; reorienting macroeconomic policy and the economy to achieve gender equality and sustainable development; ensuring the full and equal participation of women in decision-making at all levels; significantly increasing investments in gender equality; and strengthening accountability for gender equality and the realization of the human rights of women and girls, including greater efforts to make gender mainstreaming the norm in government policy and to ensure that private actors are held accountable for the impact of their actions.

Read key statistics for each of the 12 critical areas of concern here.

Related News
09/03/2015
Press release: Governments commit to scale-up investments in women’s empowerment
09/03/2015
“In 2030 we want to be able to talk about a world that has achieved gender equality” – UN Women Executive Director
06/03/2015
“Gender equality is a shared vision of social justice and human rights” – Executive Director
06/03/2015
Press conference: "Collective failure of leadership on progress for women"
04/03/2015
Media advisory: Planet 50-50 by 2030: Step It Up for Gender Equality, celebratory commemoration brings together top political actors, celebrities
END_OF_DOCUMENT_TOKEN_TO_BE_REPLACED