After receiving UN Women training, a municipality in central Turkey is actively reaching out to thousands of rural women to educate and transport them to a free cancer screening centre.

“I would not have found the opportunity to even go [get screened at all had it not been for this service],” says 65-year-old Ümmügül, from a farming family in the village of Hamamkarahisar, located an hour away from Eskişehir – a central Anatolian city in Turkey. She is one of the 659 rural women living on the outskirts of the city that have already been screened at the Cancer Early Diagnosis, Screening and Information Centre in Eskişehir since rural outreach efforts began in October 2014.

In Turkey, breast cancer is the most widespread cancer among women and early diagnosis is essential to prevent death. Breast cancer is ranked the 8th most common causes of death in the country and the Ministry of Health estimates that there are 30,000 new cases each year. 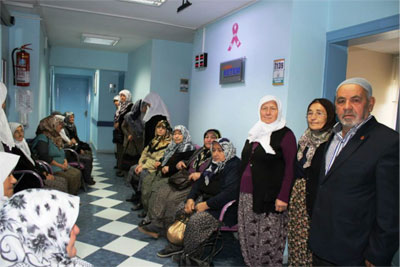 The Metropolitan Municipality of Eskişehir started facilitating screening for rural women in late 2014, after receiving gender-responsive budgeting training conducted by UN Women in November 2013. Run in 11 provinces across Turkey, these trainings aim to increase the capacities of local administrations, women’s civil society organizations and women studies centres in universities to analyse, develop and monitor local budgets and ensure they respond equally to the needs of women and men.

After the training, with the support of Mayor Yılmaz Büyükerşen, municipality staff conducted gender analyses of municipal services in a range of fields, including health. In the process, they realized that women living outside the city cannot access early cancer diagnosis and screening services. Although cancer screening is provided for free in the centre of the province by the Ministry of Health, rural women have limited access due to lack of knowledge, inability to make appointments, the cost of transportation, or because they are not permitted by their husbands.

As a result, the Municipality began educating and informing rural women about the importance of early cancer diagnosis screening via mukhtars (the head of a village).

Ümmügül heard about the cancer screening service for the first time from her village mukhtar.

Awareness on the importance of cancer diagnosis screening is now growing around Eskişehir. The Municipality makes appointments at the screening centre in the city for rural women and also arranges for free transportation from their villages to the health centre every Monday.

If a cancer risk is detected during screening, women are immediately referred to a hospital. 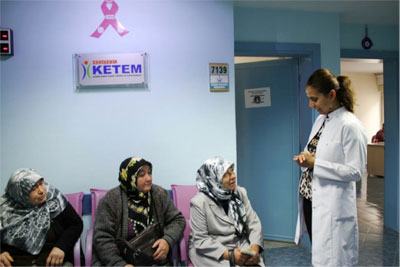 “Our cooperation with the Municipality has been extremely effective in terms of raising awareness, diagnosis and treatment of breast and cervical cancer among rural women,” says Dr. Ömür Önaçan, of the Cancer Early Diagnosis, Screening and Information Centre. She says before this cooperation it was very difficult to reach out to rural women, many of whom were unaware that these services even exist. She says the Municipality has made an important contribution to prevention and improving women’s health with this best practice.

At first, the Municipality was only planning to provide the service until the end of 2014, but given the increasing demand, it decided to continue the service as long as there is interest.

UN Women has been carrying out gender-responsive budgeting training with 11 municipalities in Turkey within the framework of the UN Joint Programme for Promoting the Human Rights of Women, implemented in cooperation with UNDP, Sabanci University, the Turkish Ministry of Interior Affairs, Ministry of Education, Ministry of Family and Social Policies and Union of Municipalities of Turkey. The main donor of the programme is the Sabancı Foundation and UN Women and UNDP also provide support through core funding.