Budgets respond to the needs of women in Morocco

The needs of women and girls are increasingly being reflected in how governments spend in Morocco and a new organic law of finance passed in January 2014 by the Council of Government has cemented gender throughout the budgeting process.

“Before I was housewife and was in charge of domestic work. One day I decided to change my life and I joined classes. For two years, I learned to read and to write. I also learned Arabic, calligraphy and plastic arts. Today, I create my own paintings and with the other women in my course, we decided to create a cooperative to better market our products,” says Fadma. 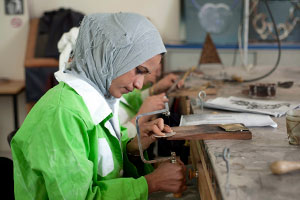 A beneficiary of the Lalla Fatima Zahra Alaazizia Complex that supports women survivors of violence, connects them with hospitals, courts and other services and provides them with vocational training for the workplace. Fez, 2012. Photo: UN Women.

Fadma is a beneficiary of a programme being implemented by the Department of Literacy in Morocco – one of five pilot departments that have adopted a results-based approach, and is integrating gender-responsive planning and budgeting by using performance indicators that take gender and women’s needs and concerns into account.

Gender-responsive budgets ensure that the allocation of public resources benefits women and men equally. Gender-responsive budgeting (GRB) determines how public funds are spent and who benefits from them. It takes into account the different needs and contributions of women and men within existing revenues and allocations and calls for adjusting budget policies in a way that contributes to advancing gender equality and women’s empowerment.

The Department of Literacy now conducts budget planning of its programmes based on its “targets” which are largely women, who now constitute 85 per cent of the beneficiaries of such literacy programmes in Morocco.

This approach, which began in 2009, has allowed the Department to better adapt to the needs of its beneficiaries. As a result, several different programmes are also being developed according to age (15-24; 25-45 years and 45+), as well as employment status (employee or looking for employment).

A testimony to Morocco’s commitment to GRB, a gender budget statement or gender report has been drafted annually in the country since 2006 and presented as an annex to the Finance Bill. The report was the result of a partnership between UNIFEM (one of UN Women’s predecessor organizations) and the Government, aimed at incorporating a gender perspective into the national budget reform process. The report reinforces accountability to meet the Government’s commitments on gender equality.

“Morocco is one of the leading countries in the field of gender-responsive budgeting,” said the UN Women Regional Director of the Arab States, Sameera al-Tuwaijiri, hailing the country’s efforts to bridge the gender gap.

Ongoing efforts have resulted in GRB being progressively anchored in Morocco’s budget reform process, with five pilot line ministries applying GRB programming and 27 ministries taking part in the preparation of the gender report. Since 2011, the gender report has also included an analysis from multiple sectors which measures progress made by Morocco towards implementing international human rights standards and obligations.

Other results of advocacy are also evident. Experimentation with results-based and gender-responsive public finance management for more than 10 years in Morocco also resulted in the adoption of a new organic law of finance (akin to a financial Constitution), approved in January 2014 by the Council of Government, which legally institutionalizes gender equality throughout budget processes. Taking the GRB processes a step forward, the new legislation explicitly mentions that gender equality must be taken into account in the definition of objectives, results and indicators of performance of the line budgets. The new organic law also institutionalizes the Gender Report as an official document that is part of the annual Finance Bill – an important achievement.

Following the adoption of Morocco’s new Constitution, in November 2012 UN Women supported meetings such as the high-level conference in Marrakech, which brought together nearly 250 participants from over 30 countries. At the meeting, the UN Resident Coordinator in Morocco, Bruno Pouezat, highlighted the success of the Moroccan experience in GRB and the greater impetus it has within the new Constitution. He also underlined the UN’s support of countries’ efforts to integrate the gender approach in their budgets, considering this to be an essential mechanism to foster the principles of transparency in public policies.