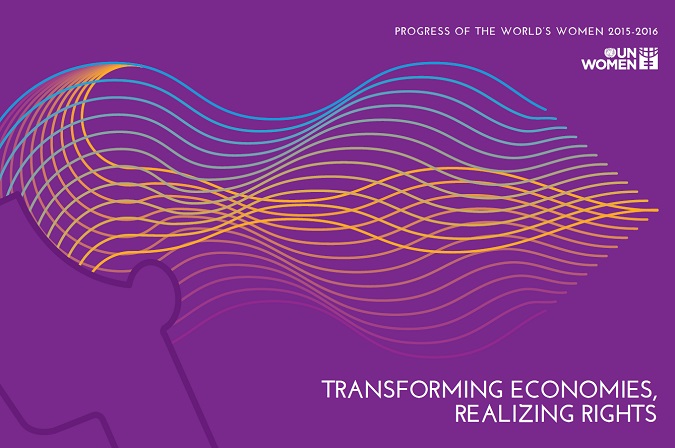 Chock-full of solid in-depth analysis and data, UN Women’s flagship report “Progress of the World’s Women 2015-2016: Transforming Economies, Realizing Rights” is being launched on 27 April in seven cities around the world.

Fusing human rights and economic policymaking, this evidence-based report provides the key elements for a far-reaching new policy agenda, with key recommendations on moving towards an economy that truly works for women, for the benefit of all.

The report was under embargo until the first press conference in London, at 10 a.m. GMT, where UN Women Executive Director Phumzile Mlambo-Ngcuka presented the report. See the media advisory. The press conference was followed by a panel discussion co-hosted by UN Women and the Gender and Development Network from 11.30-1 p.m. GMT. See the flyer.

That press conference will also be followed by a panel discussion at the Ford Foundation at 1 p.m. See the flyer. Watch the livestream here.

Other launch events are expected to take place in Mexico City, Nairobi, Bangkok, Alexandria and Sydney.

This is the seventh edition of Progress since 2000.

Related News
17/04/2015
Media advisory: New York launch of flagship UN Women Report: Progress of the World’s Women 2015-2016
27/04/2015
Press release: New report from UN Women unveils far-reaching alternative policy agenda to transform economies and make gender equality a reality
17/04/2015
Mobilizing greater global investment in gender equality and women’s empowerment
09/03/2015
“In 2030 we want to be able to talk about a world that has achieved gender equality” – UN Women Executive Director
13/03/2014
The Beijing Platform for Action and the Global Development Agenda from the MDGs to the Post-2015 Development Agenda – a speech by Lakshmi Puri
END_OF_DOCUMENT_TOKEN_TO_BE_REPLACED