Statement by Deputy Executive Director of UN Women, Lakshmi Puri, at the launch of UN Women’s flagship report, Progress of the World’s Women: Transforming Economies, Realizing Rights, on 21 May at the International Labour Organization Headquarters, in Geneva, Switzerland. 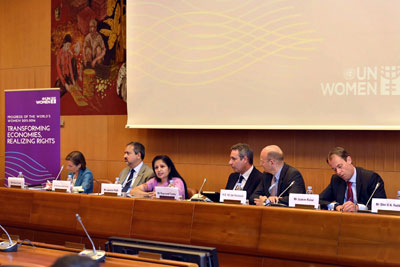 It is my pleasure to be here at International Labour Organization (ILO) in Geneva, Switzerland, for this event to launch UN Women’s flagship report, Progress of the World’s Women: Transforming Economies, Realizing Rights.

Before I begin my remarks, let me take this opportunity to thank the colleagues from ILO who supported us in compiling this important report, including by generously providing data, supporting and verifying our analysis, and through commenting on and inputting to the chapters.

We appreciate the support of our sister agency and hope we can again count on your support to implement its recommendations.

This report presents a transformative economic agenda for making women’s rights a reality.

Twenty years after the landmark Fourth World Conference on Women in Beijing, and at a time when the global community is defining the Sustainable Development Goals (SDGs) for the post-2015 era, the consensus on the need to achieve gender equality and women’s rights is stronger than ever before.

Yet there is a disconnection between our common vision and tangible progress on the ground.

Our world is out of balance.

The world is both wealthier and more unequal today than at any time since the Second World War.

We are recovering from a global economic crisis – but, as ILO analysis has repeatedly shown, that recovery has been jobless.

Women are more educated than ever before, and yet globally, they are struggling to find work and make ends meet.

Where women are employed, for the most part, they are in poorly paid, insecure occupations, like small-scale farming, urban street trading or as domestic workers, a sector in which 83 per cent of jobs are filled by women.

Even in developed countries, many of the jobs that are being created are of poor quality, often temporary jobs that lack basic security.

Why isn’t the global economy fit for women?

In Progress of the World’s Women, we investigate what this failure means, and what its underlying causes are.

Just as importantly, we envisage what an economy would look like, if it truly worked for women.

If the economy worked for women, they would have equal access to opportunities and resources, to enable them to be economically independent, and to live a dignified life.

The truth is, only half of women participate in the labour force compared to three quarters of men.

In some developing regions, 75 per cent or more of women’s employment is informal - jobs that are unprotected by labour laws and lack social protection.

Indeed, in the same week as the global launch of Progress of the World’s Women, none other than Pope Francis said about the gender pay gap: "the disparity is a pure scandal".

If the economy worked for women, they would carry out their work without fear of sexual harassment or violence. Women’s paid and unpaid work would be respected and valued.

Right now, too many women face harassment and violence in their everyday work.

Three quarters of women in management and higher professional positions in the EU have experienced some form of sexual harassment in the workplace.

They would be able to shape economic and social policies to fit the realities of their day-to-day lives.

Too often, the reality is that economic decisions are made and resources allocated without women’s voices being taken into account.

Today, with this report, we are demanding nothing less than a new economic agenda. One that works for women, but will benefit all of society.

What would this new agenda look like? There are three elements, which must work together.

First, we must transform paid and unpaid work, to make it empowering for women.

Second, we need social policies to support women, including family allowances and pensions. We need public services – water and sanitation, healthcare, and childcare services – designed with women’s rights in mind

Third, we need macroeconomic policies that support the realization of women’s rights, by creating dynamic and stable economies, by creating good jobs and by raising the resources needed to finance vital public services.

We should demand alternatives to the failed economic policies of the past, which have immiserated so many and held back the onward march of progress, for women and men.

I know that for many people in this room, these issues – of decent work, social protection, and progressive macroeconomic policies – are close to your hearts.

The recommendations that we make in the report largely speak to the rights that are already guaranteed by human rights treaties, including the Committee on the Elimination of all forms of Discrimination Against Women (CEDAW) and the international covenant on economic, social and cultural rights (ICESCR).

What this report shows is that in order for women to enjoy their rights in practice, to achieve substantive equality, we need policies in each of these areas – decent work, social policies and macroeconomic policies – to be informed and infused by gender analysis.

We also show that policies in these three areas are intrinsically linked, and therefore must work together.

Without the possibility of a decent job, women cannot work their way out of poverty;

Without public services, like childcare or water and sanitation, it is difficult for women to get that decent job;

Without the right macroeconomic policies, there will not be enough resources to pay for those public services that provide a lifeline for women and their families.

To bring about the transformative change we so urgently need, we need to work together.

Governments are responsible for realizing human rights, but they cannot do it alone.

We need to work together as UN agencies to support governments to bring about the change we need to see.

ILO has been at the forefront of the struggle for workers’ rights for nearly a century. Our call to you is to ensure that women workers’ rights are always at the top of your agenda.

To close the gender gaps in paid employment, we need to support governments to recognize, reduce and redistribute women’s unpaid care work; introduce and implement minimum wages; to ratify the domestic workers convention (to date 17 countries have taken this step, which is good, but not good enough); and to extend social protection to informal workers.

The ILO’s social protection floor initiative, which has been so critical in moving the social protection agenda forward, also needs to include a much stronger focus on social services, including care services, which are particularly important for women.

We need to send a clearer signal that gender-based violence in the workplace is unacceptable, and that governments, trade unions and employers all need to take steps to end it.

The proposed ILO convention on gender-based violence would fill an important normative gap here, and deserves our support.

The private sector must play its part: as employers, by creating decent jobs for women, with equal pay and opportunities; and as businesses and wealth creators, by paying their fair share of taxation to finance essential social services from which they also benefit.

Quality care services that are affordable expand women’s choices and improve career prospects, but they also broaden the talent pool.

Civil society must continue to play its role as ‘watch dog’, by placing women’s rights on the agenda. Women’s organizations have been an engine for change, but we also need trade unions and workers’ movements to get on board.

And for our part, global governance institutions, both the UN and the international financial and trade institutions, must support the realization of women’s rights.

We need more policy space for countries to develop gender-responsive policy agendas; and fewer tax havens that rob countries of the resources they need to implement this agenda.

Ultimately, upholding women’s rights will not only make the economy work for women, but it will also benefit societies at large by creating a fairer and more sustainable future.

Thank you for your attention! 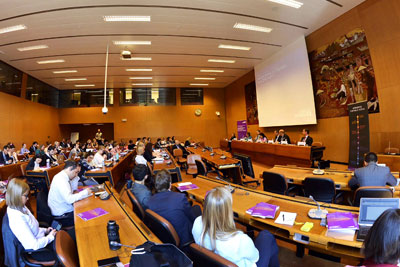