Expert’s take: No empowerment without rights 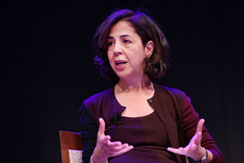 Shahra Razavi joined UN Women as Chief of Research and Data in June 2013. She specializes in the gender dimensions of development, with a particular focus on work, social policy and care. Before that, she was a senior researcher at UNRISD, where she led the institute’s research programme on gender and development. Shahra is the author of more than 40 refereed journal articles and chapters in edited volumes. She holds a Bachelor of Science from the London School of Economics (LSE) and a Masters and PhD from Oxford University.

In recent years a wide range of actors—donor agencies, governments, civil society organizations and the private sector—have embraced the goal of women’s economic empowerment. The change in language is a significant achievement of the women’s movement, which has been able to catapult a concept that was developed in feminist research and advocacy networks into the mainstream of policy debate. However, as in the case of other concepts that have gained widespread traction (e.g. participation), up-take by powerful actors often means that concepts are reinterpreted and used in ways that fit the interests of their users. In the process they lose their original clarity and edge, and often become fuzzy and ambiguous.

This is quite clear in the way ‘empowerment’ is being used these days. Some see in women a largely untapped market of consumers (good for boosting profits), while others talk about unleashing women’s economic potential as a means to solve the lingering problems caused by the global financial crisis (good for growth). No one would deny the importance of nurturing synergies between women’s economic empowerment and wider prosperity. Women’s participation in the workforce, for example, contributes to economic dynamism by bringing more income into the household, boosting aggregate demand and expanding the tax base.

A fundamental question that we need to ask, however, is whether these presumed ‘win-win’ scenarios stand up to scrutiny, and what is in it for women? Does it expand women´s practical enjoyment of their rights? Or does it simply harness their time, knowledge and resourcefulness to serve development ends with little or no benefit to women themselves?

This is where a strong anchoring within a human rights framework becomes essential. Without a monitoring framework that squarely focuses on women’s rights it is difficult to know what lies behind lofty claims of ‘empowering women’. Going beyond the headline figures on women’s labour force participation or number of jobs created, we need to ask if women’s participation in the workforce is translating into concrete outcomes in terms of their right to a safe and healthy working environment, fair and adequate earnings and access to a pension for their elderly years, and whether they are able to reduce and redistribute their unpaid care work?

These are exactly the kinds of questions that we ask in UN Women’s flagship report Progress of the World’s Women 2015-2016, Transforming Economies, Realizing Rights. The report shows that the world’s women are a long way away from enjoying their economic and social rights. Not only is women’s labour force participation lagging behind men’s (by 26 percentage points), but there is a significant global gender wage gap (on average 24 per cent) that has changed very little over the past decade. The bulk of women’s employment (75 per cent or more in some developing regions) remains informal with little or no social protection, and women around the world allocate considerably more time to unpaid care and domestic work compared to men (2.5 times on average).

Now that we have women’s economic empowerment on the agenda of such diverse, and powerful, actors we need to be more probing to make sure that the right laws, policies, resources and social norms are in place to make meaningful changes in women’s concrete enjoyment of their rights. As feminist scholar and activist Gita Sen has argued, the struggle of getting women’s rights on the policy agenda “is not a once-and-for-all event … winning the struggle over discourse is only the first step”.

In moving forward, those advocating for women’s economic empowerment would do well to be attentive and to scrutinize the extent to which women are able to enjoy not only their equal right to work, but also their rights at work. Women’s economic empowerment cannot mean factories that collapse on their workers, casual work in global value chains that comes with low wages, no right to social protection and leads to ‘burn out’ in a short time. Nor can it mean an extended ‘double shift’ made up of paid work added to an unchanged load of unpaid care work.

Women’s concrete enjoyment of their rights to work and their rights at work also makes good economic sense. Investing in quality and affordable care services for example has the potential for a triple dividend: supporting and reducing women’s unpaid care work; contributing to the growth and flourishing of children; and generating decent employment opportunities for paid care workers. This would be an agenda worthy of the term women’s empowerment!