Through a programme supported by UN Women’s Fund for Gender Equality, more than 1,000 women have joined savings and loans groups, started businesses, and sought legal advice to claim their rights. 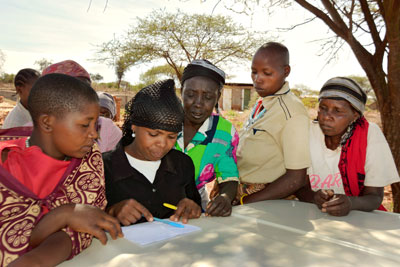 KWIECO (former) legal officer Anna Gabriel provides legal advice and support to Upendo Women’s Support Group chairperson Rose Davis. “Now with the support and advice that I am getting from Anna I believe that things are going to move,” said Ms Davis. Photo: UN Women/Stephanie Raison

When farmer and widow Rose Davis’ plot of land was taken over by another farmer in 2012 she lost her income. Alone and with no savings she was discouraged by many from taking legal action, which also brought with it substantial costs.

Having lost the land that was given to her by her father after her husband’s death, Ms. Davis could have easily given up her legal fight to reclaim her property. However, she is now actively pursuing her case at the District Land and Housing Tribunal in the Municipality as a result of the Women’s Economic Empowerment for Justice in Tanzania Programme, which is funded through a USD 450,000 grant from UN Women’s Fund for Gender Equality. 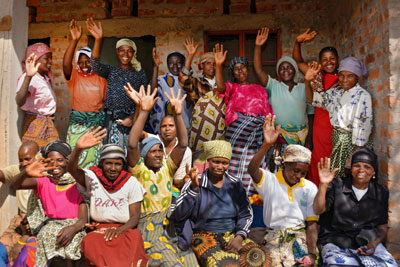 Upendo Women’s Support Group members meet once a week at the village offices. The 21 members each contribute to the savings and loan fund and a social fund. UN Women/Stephanie Raison

The programme is being implemented in the northern Kilimanjaro region of the United Republic of Tanzania by the Kilimanjaro Women Information Exchange and Consultancy Organization (KWIECO) and is supported by UN Women. The goal is to increase vulnerable women’s incomes, access to legal support, and awareness of their rights. Through peer support groups, skill-building, and access to information to generate a sustainable income, they are gaining the confidence and capacity to challenge violations of their rights.

Women in Kilimanjaro live in a patriarchal society where they are often not allowed to own or inherit land. So raising the level of awareness and having women speak up about violations of their rights has been encouraging, says KWIECO’s Executive Director Elizabeth Minde. “If women come out of their shell, then you had better help them. We have to work long hours and overtime now to meet the demand.” 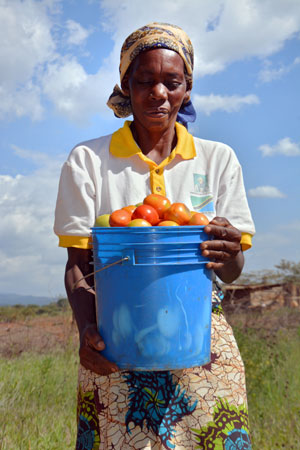 Upendo Women’s Support Group member Martha Simon is now able to earn an income selling tomatoes. She has already paid back the 150,000 Shillings (USD $93) loan she took from the Group to buy treatment for her tomato crop. Photo: UN Women/Stephanie Raison

To reach women in the predominately rural area, 48 savings and loans groups have been created, which currently have 1,099 members. To date, some 863 women have received loans from their groups and 253 who have never owned businesses before have started new enterprises. It is hoped that, through training on their rights and economic independence, more women will have the means to pursue legal cases. These groups are also a vehicle for knowledge-sharing, training and support through mentorship.

Last year, Ms. Davis was elected as Chair of the Upendo (which means Love in Swahili) Women’s Support Group in her remote village at the foot of Mount Kilimanjaro. The Group has 21 members and has saved 2,720,000 Shillings (almost USD 1,350) for collective use. It is available for women like Ms. Davis to borrow. She took a loan of USD 75 to lease land to farm and start a small business to support her family of three children while she continues the legal proceedings. This has given her an income and helped cover the cost of going to court.

Round trip transport from Ms. Davis’ village, Mitimirefu (Tall Trees) near Moshi in northern Tanzania, to the nearest court room costs USD 2.50 by the only form of transport available from her village, motorbike. This is a significant cost in a village where women earn an average of USD 10 per month. A baseline study of vulnerable women in the six districts of the Kilimanjaro Region found that 79 per cent of women earn less than USD 1 per day.

The women meet once a week to discuss their problems, to receive training and to contribute USD 0.50 to the savings scheme for loans and USD 0.10 to the social fund that is available for emergencies. 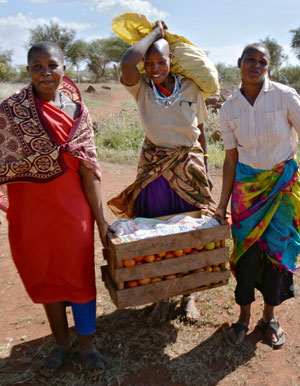 The three youngest members of Upendo Women’s Support Group preparing to sell tomatoes at the local market. The women share the cost of transporting the goods to the market. UN Women/Stephanie Raison

Legal officer Anna Gabriel has trained 516 women on human rights, and informed them of gender equality and marriage laws. During the workshops, women learned that if their husband dies, as a wife they have the legal right to inherit the land. Many only knew the traditional custom of the husband’s family taking over the land and widows often being left destitute. KWIECO is already busy providing legal advice to the newly empowered women, and hopes to help 50 women pursue cases through the courts – related to inheritance rights, domestic violence, unpaid child support and others.

“Having access to money made the women come forward. Some of the women knew about their rights but a barrier to accessing their rights is economic independence,” said Ms. Gabriel.

Project coordinators say the most noticeable impact of the programme has been the increase in self-esteem among women who were previously lonely and desperate but are now encouraged by the group solidarity.

Before joining the group, Ms. Davis said she had high blood pressure, but now it has stabilized.

“From associating with fellow women in the group you feel less lonely,” she says, adding that her world changed “through the exchange of ideas … and also from the interaction with other women … and the loan that I accessed. Although it is not all that I need, there has been an improvement.”

Related News
12/09/2019
From Tanzania to Algeria, rural women are taking charge of their lives and livelihoods
02/06/2015
Boosting financial and business literacy in Rwanda
15/01/2013
Pooling resources for local development: Tanzanian women take matters into their own hands
09/08/2021
I am Generation Equality: Immaculate Akello, climate change activist and lawyer standing up for rural women
11/10/2019
Climate-friendly biogas becomes ‘fashionable’ in rural Tanzania
END_OF_DOCUMENT_TOKEN_TO_BE_REPLACED