UN Women presents its work on women and girls with disabilities

The Convention on the Rights of Persons with Disabilities (CRPD) recognizes that women and girls with disabilities are one of the most disadvantaged groups globally, as they face additional barriers to achieving gender equality and advancement.

On 9 June, the Permanent Mission of the Republic of Korea to the United Nations, UN Women and the UN’s Department of Economic and Social Affairs co-hosted a panel discussion on “Women with Disabilities.” This event is part of the 8th session of the Conference of States Parties to the CRPD which convenes annually to consider any matter related to the Convention’s implementation, held at the United Nations Headquarters in New York from 9 to 11 June. 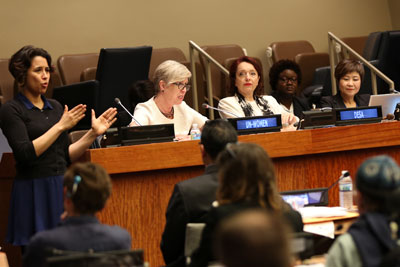 Kristin Hetle, Director of the Strategic Partnerships Division of UN Women speaks at the side event: “Women with Disability”, co-organized by UN Women, held as part of the 8th Conference of States Parties to the Convention on the Rights of Persons with Disabilities at United Nations Headquarters on 8 June 2015. Photo: UN Women/Ryan Brown

Echoing this year’s conference theme “Mainstreaming the Rights of Persons with Disabilities in the Post-2015 Development Agenda”, this panel  focused on the achievements, lessons learned and challenges in the area of equality, empowerment and protection of human rights of women and girls with disabilities, especially in the context of Beijing+20 and the post-2015 development agenda.

Kristin Hetle, the Director of the Strategic Partnerships Division at UN Women, gave opening remarks that reflected UN Women’s efforts to promote the empowerment of women and girls with disabilities on a global scale with a multi-sectorial approach.

On 11 June at the closing event, Ms. Hetle will present UN Women’s work on the implementation of the CRPD with a focus on bringing the rights and empowerment of women and girls with disabilities to the forefront of gender equality and disability-inclusive movements.