For many in the room this may have been similar to other business breakfasts – an early start for a room full of professionals at a 5-star hotel in Cape Town. But for one person it was anything but typical. By 7 a.m. on a typical morning 40-year-old Noko Maganyele has prepared food for the day’s trade and is opening the doors of her small business in Diepsloot, a densely populated township north of Johannesburg where makeshift shacks are built on every available piece of land. 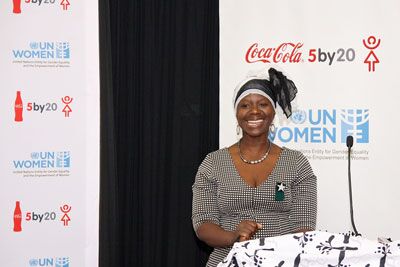 What sets Ms. Maganyele apart from the millions of women in townships across Africa who run small informal businesses selling hot food and refreshments, is her participation in a programme under the global partnership between UN Women and The Coca-Cola Company. The programme builds the capacity of women entrepreneurs running micro and small businesses. To date more than 14,000 women in South Africa – many running small businesses linked to Coca-Cola distribution chains - have benefited from learning new business skills as a result of this joint initiative.

Ms. Maganyele attended the “Empowering Women through Partnerships” breakfast on 5 June, hosted by The Coca-Cola Company, UN Women and the Business Fights Poverty network, to showcase the impact the programme is having on the lives of participants. UN Women Executive Director Phumzile Mlambo-Ngcuka was also one of the speakers at the event as part of her week-long mission to South Africa. Many in the audience were in Cape Town for the World Economic Forum on Africa, which Ms. Mlambo-Ngcuka is co-chairing.

“As UN Women’s collaboration with The Coca-Cola Company demonstrates, the combination of expertise, resources and committed leadership is a powerful force for change,” said Ms. Mlambo-Ngcuka. “Investing in women-owned SMEs pays dividends in terms of jobs, income generation and improved development outcomes.”

Living proof of these dividends is Ms. Maganyele. “After my training, my eyes have been opened up to great possibilities. All the skills that I learned helped me to nearly double my profit,” she explained. 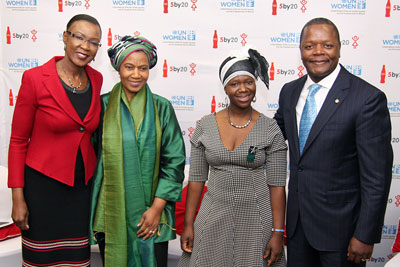 Only a few years ago Ms. Maganyele’s future looked much bleaker. As a single woman caring for the five children of her two sisters who had passed away, losing her job as a waitress in 2010 could have been catastrophic. Instead she knew she had to make a plan and from a table in her front yard began to sell her mokgodu and pap – a traditional South African dish.

Through hard work and patience, Ms. Maganyele was able to expand her menu and finally save enough to build an actual shop in front of her house with seating for her customers. In 2014, she was approached to take part in a business skills workshop run by Hand in Hand, UN Women and Coca-Cola’s implementing partner for the programme.

“I joined the workshop and I received training on daily record-keeping, managing stock and business marketing and many other skills. Soon I was able to pay myself a salary. But more important than money, my self-confidence has grown and I am happy to be able to take care of my children and mother while doing what I love,” explained Ms. Maganyele.

The business continues to grow and now has three employees, demonstrating that when women are empowered, the benefits ripple outwards and bring benefits to many others.

“When we invest in women, it sets a direct path towards gender equality, poverty eradication and inclusive economic growth,” reflected Ms. Mlambo-Ngcuka. “Programmes such as this one help women overcome barriers, understand and unlock their potential, and build their business in a sustainable way.” 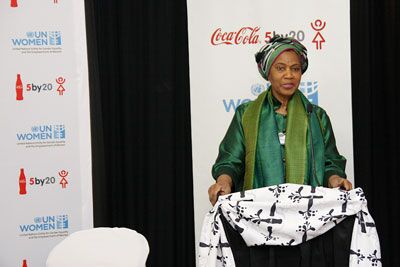 From The Coca-Cola Company’s perspective, women form a central pillar of its sustainability. “Helping to create a fair and equitable environment for women makes good business sense. When women entrepreneurs succeed, communities succeed,” said President of Coca-Cola Eurasia and Africa, Nathan Kalumbu, as part of his introductory remarks. “Our 5BY20 initiative aims to empower 5 million women by 2020.”

Back in Diepsloot, the future is looking bright for Ms. Maganyele and her family. This week, accompanied by Coca-Cola and UN Women team members, she travelled on a plane for the first time and had the opportunity to see Cape Town. But more significantly, she feels optimistic about her family’s future.

“I believe women were made to be strong and to never give up. As a mother you need to ensure that you are doing everything in your power so that your children go far in life. This is what motivates me every day. Sometimes when I look around my business, I see how far I have grown and I am filled with so much pride I could cry. Now I do not worry about my future,” concluded Ms. Maganyele.