Overcoming a life of loss, a dynamic Georgian woman now runs a daycare, computer centre, mill and vocational programmes for youth from her home, while also serving on local government.

A little house is hidden in greenery on the outskirts of the village of Koki in western Georgia. It has only three rooms: The host lives in one; another is decked with two sewing machines, manicure and hair-dressing tools and colourful artwork; while several computers and a photocopy machine fill the third. Iruza Kakava, 43, lives in this house with her husband and son while running a free daycare centre and programmes for people with disabilities, orphans, vulnerable children and youth. 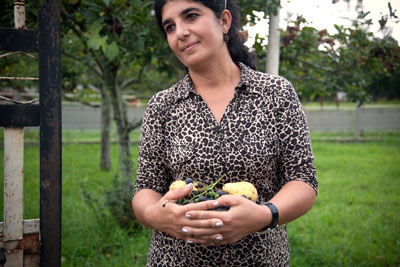 Iruza Kakava runs a free daycare centre and programmes for people with disabilities, orphans, vulnerable children and youth from her home on the outskirts of the village of Koki in western Georgia. Photo: Justyna Mielnikiewicz.

Ms. Kakava is an Internally Displaced Person (IDP) from the Gali region of Abkhazia, Georgia. She was a second-year student at the Sukhumi University foreign language faculty when the war broke out. After regaining independence after the breakup of the Soviet Union in 1991, Georgia soon faced two internal conflicts (in the Abkhazia and Tskhinvali region/South Ossetia) and one civil war. Despite the fact that a ceasefire was reached, conflicts remain unresolved and over 259,247 Internally Displaced Persons cannot go back to their homes.

Ms. Kakava has had a hard life, experiencing hunger, homelessness, orphanhood and exile. But she never lost hope. Thirteen years after the war, at age 31 and already a mother of two, she went back to school to study English language and literature. She founded the daycare centre and vocational training initiatives where youth aged 12 to 23 study English, computer skills and felt-processing.

UN Women began working with IDP women like Ms. Kakava in Georgia in 2010, offering them a series of workshops on gender and women’s rights, local legislation and gender-responsive budgeting, along with its partner NGO, the Taso Foundation. Ms. Kakava was among the women who attended, later forming self-help groups and mobilizing for change in local policies and budgets.

“At first, we didn’t even know what mobilization meant, let alone mobilization into a self-help group,” admits Ms. Kakava. “I told myself, ‘Go Iruza, give it a shot, maybe it’ll work out’.”

UN Women also gave IDP women’s groups small grants to implement joint government-community initiatives to promote gender equality. Ms. Kakava and other women started assessing the needs of the village – noting the lack of educational opportunities and access to information. In order to establish a resource centre, volunteers purchased two computers with a grant from UN Women. Run out of Ms. Kakava’s home, it now also functions as a free Internet room for students.

There’s a box with a bow in Ms. Kakava’s daycare where people can leave their impressions and recommendations. She opens the box and reads through a few: “This is one of the most peaceful and beautiful places; Here kids receive help, advice and great warmth every day; I love you all.”

Ms. Kakava also runs a community mill in her garden that was established with a grant from UN Women in 2012 to provide livelihood opportunities for women and serve poor families free-of-charge. Women use the mill to make corn flour to consume or to sell and  earn some income.

“I do get tired. It would be a lie if I said I don’t,” admits Ms. Kakava, now 43. “Everything is in one house. Besides I have my personal things to take care of. I get up at 8 a.m., take care of the animals, I milk the cow, feed the chicken, take care of chicks, make cheese, bake bread, prepare breakfast… I should have all of this done by 10 a.m. before people start coming to the centre. Sometimes I don’t have time for myself, but that’s okay. People value what I’ve done; so what if I don’t have a two-story house and lack space? I am happy because they are thankful.” 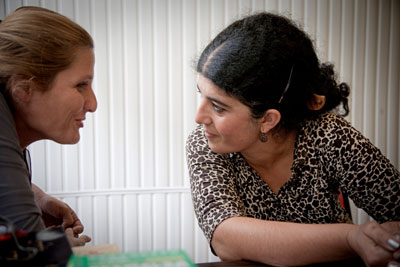 Nana Hupinia talks to Iruza Kakava during a meeting at the office of the local community based organization in the village of Koki in western Georgia. Photo: Justyna Mielnikiewicz.

Crediting the numerous trainings provided by UN Women as her inspiration, Ms. Kakava decided to take a stab at politics in 2014, to further mobilize change. She was elected as village representative to the City Council (Municipality of Zugdidi) and now has more power and resources to influence decision-making. She joined the municipal Gender-Responsive Budgeting Committee established at the local government level in 2014 with support from UN Women. Together with colleagues, she takes part in budget planning, defines priorities and indicators for women, and approves gender-sensitive local programmes. Her personal story was featured by the Guardian in March 2015.

UN Women has been working on women, peace, and security issues in Georgia since 2010 with active support of the Government of Norway. Engaging IDP and conflict-affected women in confidence and peacebuilding initiatives as well as in planning and budgeting processes at national and local levels has been key. IDP women have taken part in the development of Georgia’s National Action Plan on UN Security Council resolution 1325 Women, Peace and Security (2012-2015) approved in 2011, and remain active agents of change and advocates for its implementation.