During her official visit to Mozambique from 24-26 May, and in the lead up to the Generation Equality Forum in Paris, UN Women Executive Director Phumzile Mlambo-Ngcuka meets women leaders, government officials, the donor community and youth activists to promote women’s leadership in the Women, Peace and Security agenda, and invites Mozambique to commit to Generation Equality Action Coalitions.

At the meeting with Ms. Nyelete Mondlane Brooke, Minister of Gender, Children and Social Actions of Mozambique, Ms. Mlambo-Ngcuka commended the Ministry’s efforts to promote the Generation Equality campaign and requested further support to ensure Mozambique’s bold commitments ahead of the Generation Equality Forum in Paris. The Minister of Gender has announced that the Government will commit for two Action Coalitions, on Gender-Based Violence and Economic Justice. 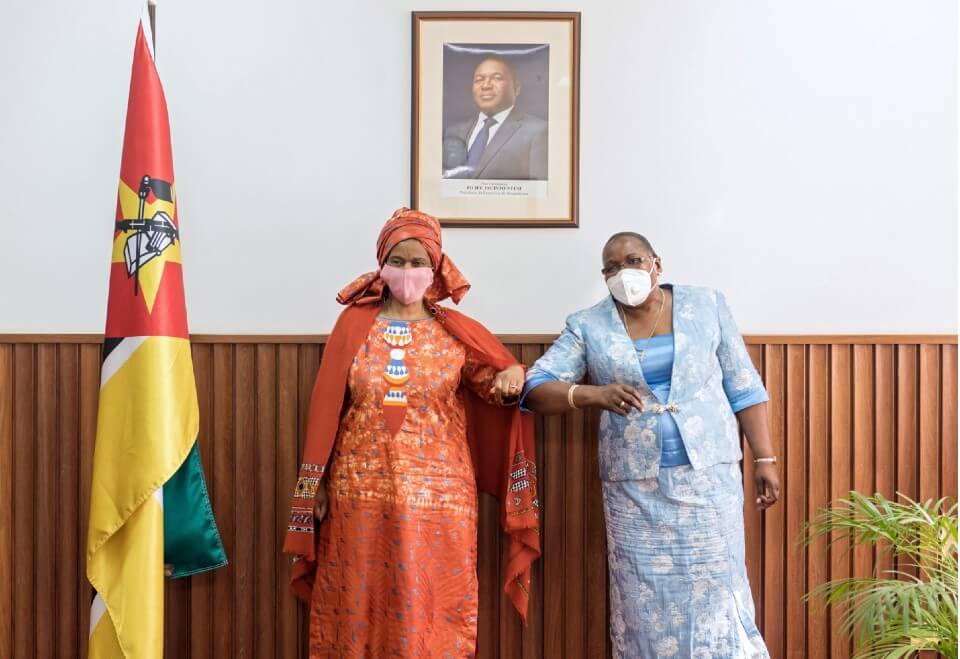 With civil society leaders, Ms. Mlambo-Ngcuka discussed the challenges they face in promoting the implementation of Women, Peace and Security agenda in Mozambique, and their involvement in the ongoing peacebuilding process and response to the humanitarian crisis in the north. She commended Mozambican women leaders’ efforts in advocating for much-needed laws and representation of women in public institutions and urged them to continue their work.

“I want to congratulate you for the many laws that have passed which advanced women’s rights in Mozambique. I also want to congratulate you for the representation of women in public institutions in Mozambique. Don’t let it slip back. If you pushed it in the public sector, it is easy to push in the private sector,” she said. “Mozambique has strong women who have been present with us, for us, all this time. I think this time again you will be able to rise. We need to make sure that we don’t lose the progress we achieved”.

“We want to make sure that we continue to pass laws around issues that you are working on and that WPS issues in a Compact is taken forward,” the Executive Director concluded.

Quiteria Guiringane, Social Activist from the Network of Young Women Leaders, said: “There are reasons of pride in the fight of women thanks to the sacrifice of activists throughout the country, the pandemic forced us to reinvent ourselves. Relying on technologies we made use of the webinars for women to connect. Making use of the photo-voices we showcased challenges of women and girls from all over the country. We did not celebrate the national women´s day in a festive environment until the situation of insecurity of our sister was not addressed. As a result of our position, the President of the Republic, dedicated April 7 (National Women´s Day) to women from Cabo Delgado province. Platforms on Women, Peace and Security, Network of religious women, movement of activists led by women, rise autonomously all over the country and we launched the first women’s observatory as a dialogue space where civil society, parliament, legal, government, private sector, media, academia, church leaders come together, a space for production of evidence and accountability to discuss priorities, budget allocation, representation and understanding of different realities.” 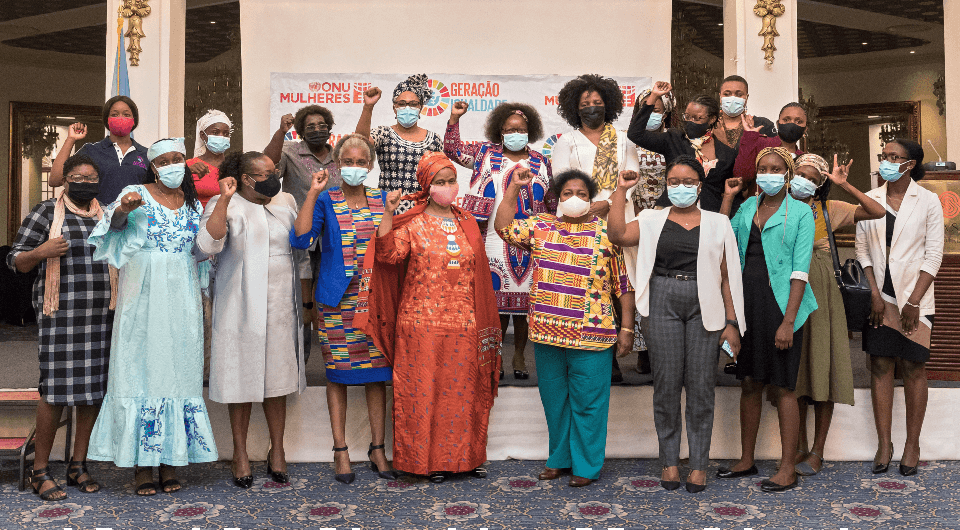 During her visit, Ms. Mlambo-Ngcuka also met with various advocates for gender equality and leaders, including Ms Myrta Kaulard, UN Resident Coordinator in Mozambique, Professor Armindo Ngunga, President of the Agency for the Integrated Development of Northern Mozambique (ADIN)and other partners to understand the current situation in the Northern Province of Mozambique and its impact on women and girls. In all these meetings, the Executive Director strongly urged partners to further prioritize women, youth and other vulnerable groups given the differentiated and disproportionate impact caused by conflict.

On the second day of her visit, Ms. Mlambo-Ngcuka attended the High-Level Dialogue on Women, Peace and Security and Humanitarian Action in Mozambique and called for enhanced political leadership, increased funding and bold actions to ensure women’s rights are met across the spectrum of peace and security, and to ensure safety for women and girls at high risk in northern Mozambique.

“Women in Cabo Delgado must not feel that they are alone. In every war situation women are more vulnerable. They die because they don’t carry arms, their children are displaces, their families are disintegrated”, said Ms. Mlambo-Ngcuka, adding that “women’s vulnerability is the vulnerability of their families and the entire community”.

“I would like to highlight that at the moment we have nearly 800, 000 people that are displaced in the province of Cabo Delgado, about 100 000 have moved to the province of Nampula, several other thousands to Niassa, several hundreds to Zambezia province. The vast majority of internal displaced people are women. So you can imagine the tragedy for the displaced people, displaced women,” said Myrta Kaulard, UN Mozambique Resident Coordinator.

“The promotion of Gender Equality is one of the major priorities commitments of the government of Mozambique and the participation of women on different fronts is a fundamental condition for sustainable development. We are aware and it was mentioned here that women and girls are the first to be hit in a conflict context, therefore, one important thing to do is to reinforce dialogue around peace in the family and community context, enhance assistance to women and girls and other affected groups to help them recover and reintegrate so they can have an independent life”, said Mr. Sansão Buque, Deputy National Director of Gender, Ministry of Gender, Children and Social Action. 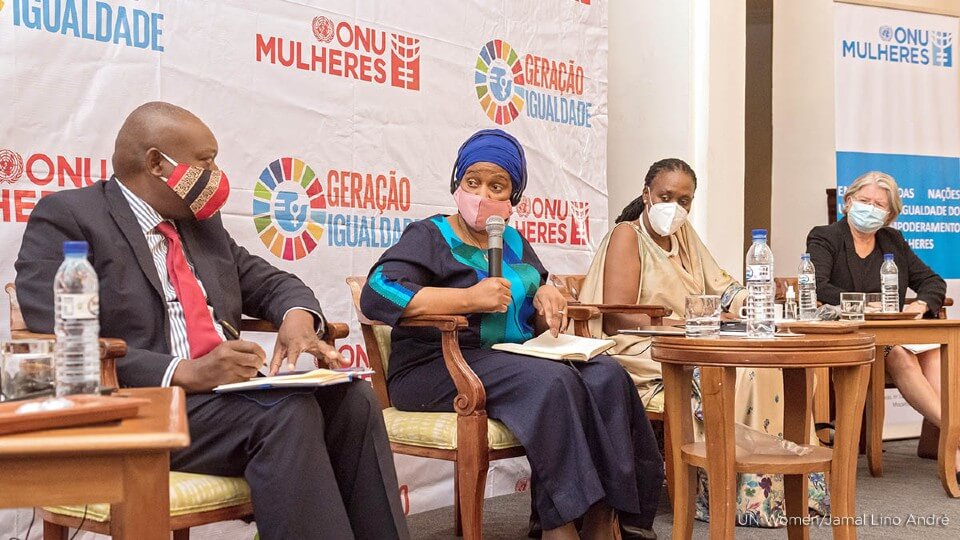 “My province has a high rate of early marriages and unwanted pregnancies, so there is a huge responsibility for boys like me to use the Generation Equality platform to engage more boys for behavior change and to work side-by-side with the feminist activists to eradicate gender-based violence and the early marriages”, said Tino Daniel, a youth activist attending the meeting.

Another participant, Clara Armando, emphasized the importance of platforms like Generation Equality. “We need more discussions around Women, Peace and Security; it is important to create this forum where the youth can express their aspirations.”

Listening to their challenges, achievements and aspirations, Ms. Mlambo-Ngcuka said: “I commend the efforts of civil society organizations, and particularly youth, for helping to raise awareness on the increase in women’s and girls’ vulnerability in Cabo Delgado”. The Executive Director called on them to continue advocating for women’s and girl’s rights to fast-track gender equality in Mozambique. 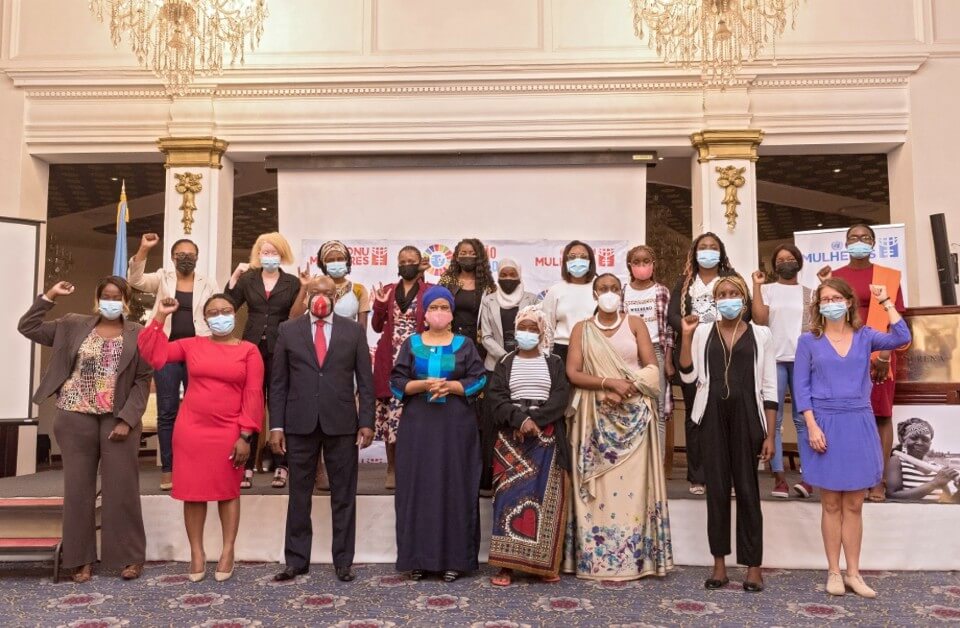 The Generation Equality Forum taking place in Paris from 30 June to 2 July will see world leaders and activists coming together to make game-changing commitments under six Action Coalitions and the Generation Equality Compact on Women, Peace and Security and Humanitarian Action. These global, multi-stakeholder partnerships will create impact for women and girls everywhere through catalytic initiatives and investments to bridge the most critical and persistent gender equality gaps.