Q&A with Nepal’s Finance Minister: “There is a need, now more than ever, for the international community to focus on gender equality” 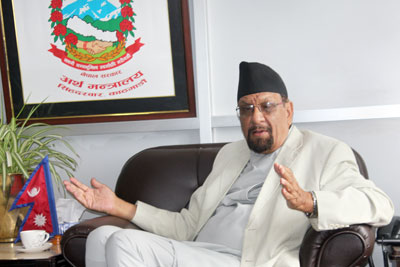 As the world community gathers in Addis Ababa, Ethiopia for the third International Conference on Financing for Development this week, UN Women sat down with Nepal’s Minister of Finance Ram Sharan Mahat to discuss how this developing country has been able to prioritize gender equality in its planning and budgeting, as well as its achievements and the challenges ahead, particularly after the recent earthquakes.

Q: The Government of Nepal introduced gender-responsive budgeting in 2007-08. What were some of the motivations behind this decision?

A: Women in development has been one of the important aspects of development paradigm for the last few decades. In Nepal, we wanted to mainstream gender in the development process so that when we are preparing plans and budgets, we have to see how gender-responsive they are. Our aim was to make policymakers take gender issues into account as they prepared development programmes.

Q: Eight years since its introduction, what have been some of the benefits of implementing GRB?

A: We are really the pioneers of GRB and have made tremendous progress since its introduction. We’ve seen constant improvement in terms of the proportion of gender-responsive budget allocations —from 11.3 per cent in 2007/2008 to almost 22 per cent 2014/2015. So the introduction of the gender-responsive element in the budget has led to improvement in allocating more resources to women in development issues.

However, this is not just in terms of the development budget. Nepal has made significant progress in empowering women in overall public affairs. For example, around 30 per cent of the Constituent Assembly members are now women, there is more quota allocation for women at the local level, and we now have reservations in civil service and public sector institutions for women including Nepal Police and Nepal Army. Tax exemptions are given to the private sector to encourage them to hire women employees. This is some of the tangible progress Nepal has made.

Q: What are some of the challenges?

A: Challenges remain because of lack of awareness. We need to develop knowledge and the skills of women leaders on GRB. Even women don’t feel encouraged to join public affairs as much as we had hoped they would—there are only 16 per cent women in civil service.

Awareness about GRB in policymaking levels is another challenge. Additionally, it is also extremely challenging to find proper human resources and capacity at the local level. But that is changing. A gender-responsive budget committee (GRBC) is in place at the Ministry of Finance since 2005, which guided the introduction of GRB in the country’s budget system in 2007. Now there are GRBCs in sector ministries and District Development Committees (DDCs). Seventeen sectoral ministries (out of 26) and 71 DDCs (out of 75) have established GRBC and are functional. That’s already a big achievement.

Meanwhile, there are many areas that are gender neutral, so it is challenging to put a cost to it. We made a national action plan for gender equality and women’s empowerment and ending gender-based violence and we ran into a challenge of how to do the costing for that. There are many national action plans that are not costed during preparation, resulting in a weak base for resource allocation.

Q: Can you tell us about UN Women’s support in the process?

A: UN Women (then UNIFEM) provided technical support by developing compatible software to the Budget Management Information System (BMIS), developing its users’ manual, and enhancing the capacity of government officials through training. Following that, UN Women has continued to support enhancing the capacity of government official and revising the manual and system. UN Women has also continued to act as a facilitator for non-government actors (gender activists and global practitioners) to raise issues and support us to address them.

Q: The country has suffered an enormous blow after the 25 April earthquake and subsequent aftershocks. As we move towards rebuilding, how are you thinking of utilizing GRB principles in the reconstruction plan and its implementation?

Q: How can Nepal be an example to other countries when it comes to GRB?

A: When a country like Nepal, on the low end of the economic ladder (in terms of our per capita income) has introduced this system and made progress over time, we have become an example to other countries to do the same. This is a unique programme, led by the Ministry of Finance, which forms the budget and the National Planning Commission, which forms the policies. So the polices, programmes and budget all come together. That is the real mainstreaming because if you attach this kind of programme to one particular ministry it becomes a sectoral affair, not a central affair. So all programmes are looked at carefully and budgets are approved in a similar manner. As the Ministry of Finance leads it and is championing for gender mainstreaming, the ministry has, in a sense, introduced GRB in the public financing system and not just in projects or development programmes.

Even the foreign aid that comes in to the country is carefully calculated for gender responsiveness using the same GRB criteria. The ministry has also led the online aid management platform (AMP) where development partners have to report their programmes. GRB is an important criteria in the system and all development partners have to report based on that classification and indicate where their contributions fall. That is a very helpful, also for the donor community, where the data is classified and published. It encourages our development partners to be gender-responsive in the future and score better.

Nepal has sent the message to the world that GRB is an important instrument to achieve gender equality and women’s empowerment; therefore Nepal has considered this as a strategy to mainstreaming gender. The reservations we have made in our programmes, the quota systems we have introduced, fiscal measures we have adopted, affirmative action we undertaken to bring women to the forefront, our allocation in the legislative and government bodies, the incentives we have given in terms of registering property under women’s name including land registration, and one-stop crisis management centre and scholarships for children from marginalized communities – these are all successes and should be taken as examples.

Q: Finally, what message can Nepal send on GRB and its importance at the Financing for Development Conference?

A: The focus should be on post-2015 and those countries that need the United Nation’s assistance the most should be the target. This includes countries like Nepal, where the need for external assistance is very high. Nepal is allocating budgets for gender equality at the local level. The story globally is different as financing for gender equality is shrinking. So what I am emphasizing is that there is a need, now more than ever, for the international community to also focus on gender equality, through the UN system and governments.

Related News
11/02/2013
Q&A with H.E Khawar Mumtaz, Chairperson of the National Commission on the Status of Women, Pakistan
23/06/2022
Op-ed: End the disconnect
01/10/2021
Comprehensive relief package provides support to women and excluded groups during the COVID-19 pandemic in Nepal
13/04/2020
From where I stand: “I want to hug my daughter and take care of my parents, but this sacrifice needs to be made to keep them and others safe”
15/08/2018
Using gender budgeting to empower ethnic minority women in Viet Nam
END_OF_DOCUMENT_TOKEN_TO_BE_REPLACED