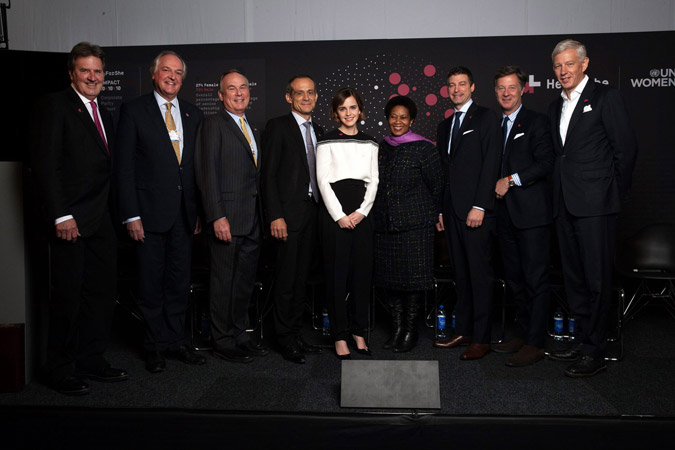 Davos—Ten of the world’s leading companies have released new workforce gender diversity figures, including details on leadership roles and board membership, in UN Women’s inaugural HeForShe Parity Report. The unprecedented disclosure was announced at the World Economic Forum in Davos, where many of the firms’ heads gathered alongside Phumzile Mlambo-Ngcuka, Under-Secretary-General and Executive Director of UN Women, and UN Women Goodwill Ambassador Emma Watson.

The Corporate Impact Champions have made gender equality an institutional priority since they signed up, and the transparency displayed in Davos will help them measure commitments and inspire action from other employers. The report figures show that a large gap remains between the representation of women in the workforce at large, and in leadership positions. Although overall representation of women averaged 39.7 per cent across the 10 firms, the proportion of senior leadership roles held by women ranged from a low of 11 per cent to a high of only 33 per cent. While this group outperforms global averages, UN Women has set parity—as part of its gender equality drive for a 50-50 Planet by 2030—as the goal and the individual company commitments reflect a variety of pathways to achieve this.

“I salute the courage of this group to reveal their equality profiles and their evident dedication to make radical change. They lay bare in specific detail what we know to be the global norm –women are chronically under-represented in leadership roles and in formal employment overall. Through their experiences, we can identify and scale solutions to transform sectors, and eventually, achieve an equal world. They are shaping what corporate leadership looks like on this issue,” said Phumzile Mlambo-Ngcuka, Under-Secretary-General and Executive Director of UN Women.

The UN has made this type of partnership a key part of achieving its 2030 Agenda for Sustainable Development, which prioritizes gender equality as both a stand-alone goal and as an integral part of other goals. The transparency displayed in the announcement is therefore crucial for measuring progress.

Recognizing both the importance of this topic and the critical need for progress, IMPACT Champions have taken a bold stance on transparency. They have committed to periodically and publically share standard figures on gender representation.

Other findings from the report include:

Four figures were selected as a standard baseline across all 10 companies, providing both a holistic workforce view as well as a detailed examination of key roles. This analysis includes three figures that explore the current representation of women, and one leading indicator, which illustrates the direction of the company going forward. Each company shared information from their completed 2014 reporting cycle. This date provides a common starting point for all companies and shows the gender composition at the outset of IMPACT 10x10x10. Corporate IMPACT Champions are reporting gender representation across:

“I am strongly convinced that women should be free to realize their career prospects and given the same opportunities as their male peers. As the CEO of AccorHotels, I have the capacity and the duty to push further for real change.”

“As a leader, husband and father, I believe that enabling true gender equality is a responsibility we all share. At Barclays, our partnership with the UN and support for HeForShe are indicative of the strength of our commitment to ensuring women can contribute fully to society, to industry and global economies.”

“Our commitment to diversity and inclusion is a part of our firm’s history and daily practice. I see it as the business of executives to set clear goals and strive to reach them, even though we know it won't be easy.”

“Part of my personal commitment is to move the needle on gender equality. HeForShe at PwC will harness the immense power of our network to promote inclusion and foster greater equality.”

“Companies have a key role to play as “change agents” to build a world where gender equality is a reality. It is a question of determination. Leading by example and engaging more men in these challenges will be one of my key priorities.”

“Some things just cannot wait. Men must stand up now for women's equality. Why am I a HeForShe Champion? Not just because I can't wait, but because I will not wait.”

“Twitter is honoured to partner with HeForShe. I look forward to the day when both my daughter and my son can enter the workforce in an environment where women have just as much opportunity as their male counterparts.”

“I am personally passionate about the HeForShe initiative, which is in line with Unilever's ambition to empower 5 million women by 2020. I will use my voice to encourage sons, husbands, brothers and fathers to pledge their support and take action.”

“At Vodafone, we are committed to greater gender equality among our employees. I pledge to continue to drive forward these initiatives with the support of all our employees aligned to the HeForShe campaign and to champion our commitments personally.”

Tragically, Mustafa Koç, Chair of Koç Holding and an ardent supporter of UN Women, died at the age of 55 in the days before the event. He had been a dedicated IMPACT CEO and contributed a huge amount to the report and its launch in Davos. UN Women expresses its deepest condolences.

Related News
24/09/2019
From G7 to Generation Equality, partners galvanize for gender equality actions
17/06/2019
Take Five: “We all have the responsibility to create and cultivate gender equality, whether at home or in the workplace”
29/05/2018
Running for a cause in Mexico
29/06/2016
“We appreciate your strong recognition of our achievements” —Executive Director at Executive Board
30/11/2015
“This is an acceleration moment”—Lakshmi Puri speaks on galvanizing action towards Planet 50-50 by 2030
END_OF_DOCUMENT_TOKEN_TO_BE_REPLACED