Women breaking barriers and optimizing opportunities in a digital world

When Ileana Crudu, 19, got a scholarship at Maastricht University in the Netherlands to study Knowledge Engineering, out of 73 students in her programme, only seven were women and she was the only one who knew coding.

“Women are not seen as logical. They are seen as emotional and irrational, and that they would crack under pressure. I want to change that. I want to prove that women can code,” says Crudu.

In order to level the playing ground and advance women’s leadership in the ICT sector, UN Women is working with partners around the world to close the gender digital gap.

Ileana learned to code by taking part in GirlsGoIT, a joint initiative by UN Women Moldova and Moldova’s eGovernment Center, National Association of Private ICT Companies (ATIC), Novateca and TEKEDU. GirlsGoIT provides girls and young women with digital, IT and entrepreneurial skills and encourages them to pursue a career in ICT, long a male-dominated sector in Moldova.

On the other side of the equator, in South Africa’s Khayelitsha suburb in Cape Town, a community workspace, ”The Barn”, is abuzz with excitement. Almost 30 women entrepreneurs have gathered around their Mozilla Club Captain, Peggy Mpahlwa to learn how to use the computer and also gain digital marketing skills. 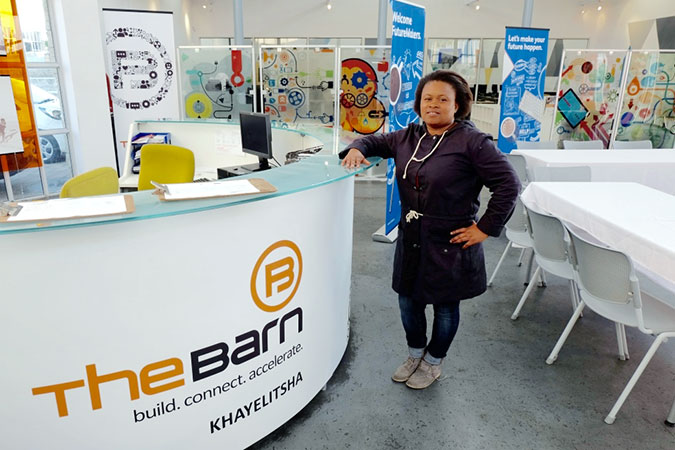 A joint initiative by UN Women and the Mozilla Foundation is supporting 20 digital literacy clubs for women and girls in Kenya and South Africa. This initiative is not only creating a safe space for women to learn in an environment free from gender bias but also training them to actively participate, lead and create on the web. So far the project is transforming the lives of 300 women and girls and plans to expand globally in the next phase.

“I am so excited to be part of these Clubs,” says Mpahlwa. “I run a club for women entrepreneurs who are learning how to use the web for growing their businesses. Most of them had no computer skills to begin with. Together, we learned the basics of computing, how to set up an e-mail, how to write documents online and more. Now they even know how to use their cell phones for business.” 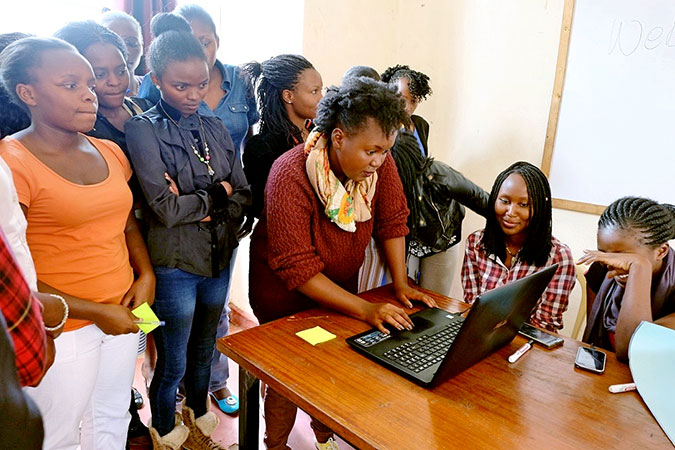 In today’s digitized and globalized world, ICT skills are a necessity, in most or all sectors and it was estimated in 2015 that 90 percent of future jobs will require ICT skills [1]. Yet, according to a 2015 report by the Web Foundation, women are about 50 per cent less likely to be connected than men in the same age group with similar levels of education and household income. Three in ten men and two in ten women surveyed reported that they believed men’s access to the internet takes priority over women’s, and that men have the right to restrict women’s access.

The Sustainable Development Goals, adopted by world leaders in 2015, recognizes the incredible potential that digital revolution can unlock for women and girls. Yet, its gains are by no means automatic. It is particularly important to invest in women as creators other than just beneficiaries in the new digital economy. “Promoting women in decision-making positions in the technology sector, as well as creation of relevant content, application, services and platforms by and for women and girls has to be an area that we proactively invest in,” says Jennifer Breslin, who leads UN Women’s work on innovation and technology for development.

A joint initiative by UN Women, Technovation and Google, “Change is Made with Code”, launched at the Global Citizen Festival in New York in September 2016, is investing in closing the gender digital gap towards the achievement of the SDGs by training and encouraging teenage girls to code on social issues that they are passionate about. The initiative aims to impact 10,000 girls globally by 2018.

Improving access goes hand-in-hand with enabling policies that advance the rights of women and girls in ICT to close the gender digital gap. The first Africa Summit on Women and Girls in Technology in Accra, Ghana, from 13 – 14 September, co-organized by UN Women and partners, launched national report cards based on a scorecard toolkit that assesses how countries are measuring up on their gender and ICT policies. Tracking tools such as this are an important source of gender data that powers evidence-based policy making to advance gender equality.

Ultimately, closing the digital gender gap brings real improvements in the lives of women and girls, and their contributions to their communities. “The ICT sector combines creativity and logic. And with these tools, the world has no limits—you can do anything just with some lines of code,” says Ileana Crudu, the young GirlsGoIT Ambassador from Moldova.

She is set on changing the world for good, one code at a time.

Related News
21/04/2021
Inspiring girls to know: Four stories to celebrate girls in ICT
06/05/2020
Op-ed: We cannot allow COVID-19 to reinforce the digital gender divide
20/06/2019
Ask an activist: Why do we need more women and girls in technology fields, and how can we inspire girls to pursue tech opportunities?
11/02/2019
UN Secretary-General to African girl coders: It needs a movement of girls to bring more women in science and technology
21/03/2018
Press release: EQUALS in Tech Awards now accepting nominations for innovative initiatives to bridge the digital gender divide
END_OF_DOCUMENT_TOKEN_TO_BE_REPLACED