Take five: Empowering women through climate-smart agriculture in the DRC

As world leaders attend the Convention on Climate Change (COP 22) in Morocco from 7 – 18 November, UN Women’s Country Representative in the Democratic Republic of the Congo (DRC), Awa Ndiaye Seck, underlines the importance of empowering women through sustainable and climate-resilient agriculture. UN Women will launch its flagship programme on climate-resilient agriculture in the DRC this year. 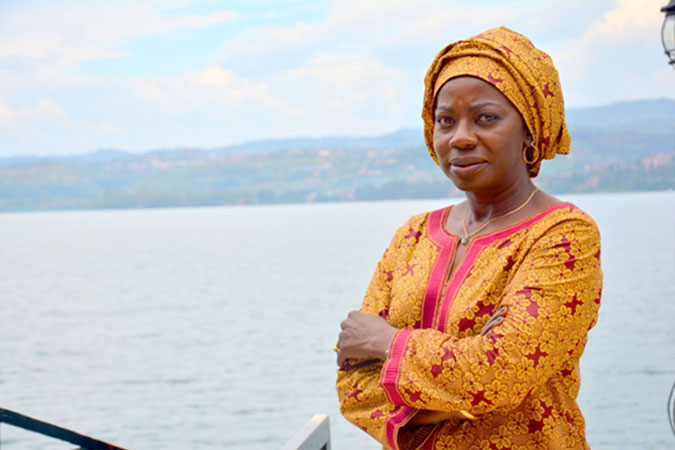 How are women in the DRC affected differently or disproportionately by climate change?

The Democratic Republic of Congo’s economy is based on farming and forestry. Women constitute 52 per cent of the Congolese population and a large proportion of them are involved in agriculture—in some countries, women make up to 80 per cent of all farmers. Climate change has led to consistently higher temperatures, heavier floods and drought, impacting crops. As majority of farmers and small tenure agricultural entrepreneurs, women are disproportionately impacted. They have lost their productions and livelihoods, on top of being impacted by the conflict.

Women also play a key role in the family and the community as caregivers. They are in charge of preparing the food and taking care of the family. The effects of climate change disrupt their lifestyle and overload them as currently they have to cover more distance to fetch water or wood for cooking. En route, they are more vulnerable to violence, including sexual violence.

How can women be part of the solution and mitigation strategies for climate change?

Women are not just victims. They are the untapped or under-utilized allies and agents of change. They can contribute to mitigate climate change if they have adequate access to information, training, awareness raising and technology. It is also imperative that we prepare women in planning, response and recovery measures for climate disasters. UN Women is building strong networks and partnerships at community, national and regional level to this end. Our flagship programmes on climate change, including climate-resilient agriculture is a case in point.

Why is UN Women focusing on climate resilient agriculture for women in the DRC?

In spite of the high representation of women in agriculture, they are discriminated against within the sector in terms of access to arable land, financing and technologies. For example, less than 10 per cent of women are landowners in the DRC; only 2 per cent of women have access to credit from financial institutions and because of this, 42 per cent of women take loans from family and friends at exorbitant interest rates. Congolese women also lack access to markets. Given the importance of the agricultural sector and women’s involvement in it, in the face of the changing climate, UN Women is focusing on addressing women’s priorities in agriculture and promoting their leadership role, while promoting sustainable agriculture.

What are the unique challenges and opportunities for women in agriculture in the DRC?

Not only do women lack access to land, markets and finances, they are also marginalized in the type and level of agricultural activities they can engage in, which perpetuates their poverty. Patriarchal attitudes and norms are at the root of this discrimination. For example, in the provinces of Tshopo and Kinshasa Bateke Plateau, when women who don’t have land want to rent land, they are asked to bring a man for the discussions, limiting their autonomy in decision-making. In the province of Maniema, UN Women’s assessments show that while both women and men may be involved in the production of rice and cassava, men would self-select to work on rice, which sells better than cassava. Women will help store, package and sell the rice bags at prices negotiated by men, who collect the money from the buyers. Similarly, in Bas-Congo, women farmers grow leaf vegetables, which cost less and can spoil faster, while men are in charge of growing and selling fruit vegetables, which sell for more and can be traded through cooperatives organized by men.

UN Women is launching a flagship programme “Women’s empowerment through climate-smart agriculture” to achieve gender equality in the context of climate change in the DRC. Tell us more about the programme—how will it work, what will it do?

The recently launched programme has four key pillars—ensuring sustainable and secured access to land by improving the DRC’s legal framework; improving women’s access to technology and information by facilitating digital platforms for women and real-time agricultural data such as information on agricultural technologies, market prices, weather predictions, etc.; improving women’s access to the funding, credit and investments; and finally, increasing women farmers’ access to markets and value chain by supporting them to form cooperatives and strengthening their capacity to meaningfully participate in the green value chain. This may include preferential access through quotas, targets, and tax exemptions for women cooperatives, and investments in local infrastructure, including post-harvest storage and processing facilities.

The programme will be launched in six provinces and estimated to reach 600,000 women directly in the next five years, focusing on five crops that are part of an average Congolese meal: maize, cassava, beans, peanuts and rice.