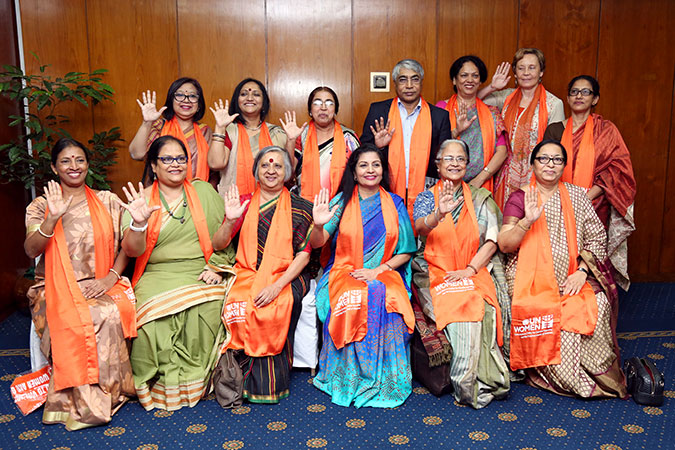 UN Women Deputy Executive Director Lakshmi Puri is visiting Bangladesh from 9 – 10 December to mark the 16 Days of Activism Against Gender-Based Violence, a global campaign that runs from 25 November to 10 December. This year, the UN system is participating in the campaign under the theme of “Orange the World: Raise Money to End Violence against Women and Girls”.

In her meetings with key stakeholders, Ms. Puri highlighted how the formidable cost of violence against women and girls impedes economic growth in Bangladesh and called for stronger commitment and investments to end the pandemic. According to the UNFPA/Bangladesh Bureau of Statistics study, more than 10 million Bangladeshi women experience physical or sexual violence every year.

The Deputy Executive Director concluded her visit in Bangladesh after participating in to discussions at the Ninth Global Forum for Migration Development (GFMD), where she delivered a statement on behalf of the Global Migration Group (GMG) of the United Nations system, which is chaired by UN Women this year.

"When migration is safe, orderly and regular, it is a positive sum game," she added. "It empowers migrants on the move and their families, it is a win for migrants and a win for sustainable development with new ideas and additional resources being generated and flowing into and enriching origin and destination countries." Read the statement>

"Still many of the policies that govern migration & seek to protect migrants fail to address the specific needs of women"-DED Ms. Puri #GFMD

In her opening remarks at the side event, “Integrating a gender perspective into the development of the Global Compact for Safe, Orderly and Regular Migration” at the GFMD, Ms. Puri said: "The movement of women should not be a negative phenomenon. It should be a right and it should be an opportunity. Growing numbers of women globally are achieving economic independence through gainful employment and, in most cases, women on the move display strength, endurance and resourcefulness, and can offer positive contributions to countries of origin, destination and return."

"However, the positive contributions of women migrant workers can only be fully harnessed if their labour and human rights are fully protected," she added. Read her speech> 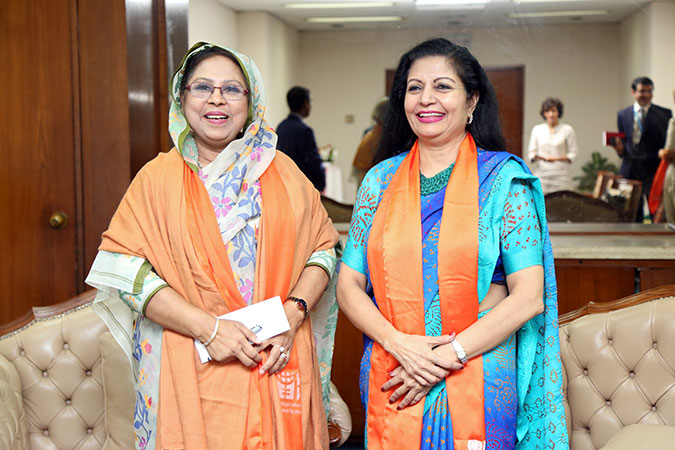 On her first day in Bangladesh, Ms. Puri met with State Minister Meher Afroze Chumki, Ministry of Women and Children Affairs, Speaker of the Parliament, Shirin Sharmin Chaudhury and attended round table discussions with leaders from the private sector and civil society organizations. The discussions focused on the role of private sector in advancing gender equality and strengthening collaborations with all partners to achieve the gender equality targets of the Sustainable Development Goals (SDGs) in Bangladesh.

“Ending violence against women is a pre-requisite for the achievement of our shared development agenda and demands innovative solutions and the forging of new partnerships to mobilize funds from all available sources,” said Ms. Puri in her meeting with Minister Chumki. The Deputy Executive Director commended the leadership of the Government of Bangladesh and encouraged gender-responsive implementation of the SDGs, with an emphasis to ending child marriage and preventing violence against women. 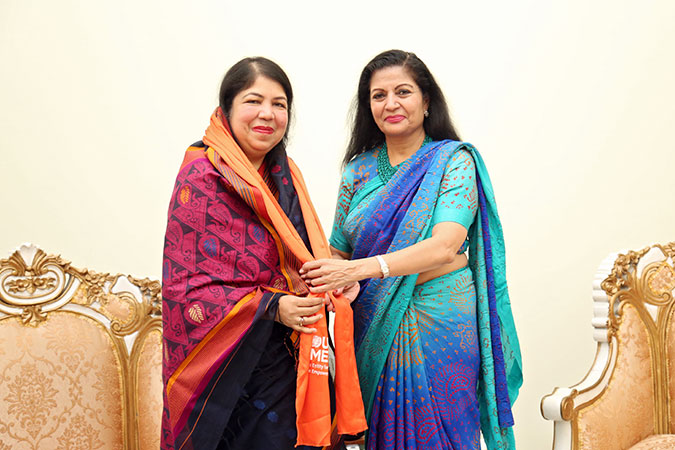 “Bangladesh has seen women political leaders at the highest level since the 1990s. People don’t even see the Prime Minister as a woman. They see her as a leader. And that’s the normal we need to get to," said Shirin Sharmin Chaudhury, Speaker of the Parliament. During the meeting, they discussed on strategies for increasingwomen’s representation in the political and parliamentary space. The Bangladeshi Parliament has 50 seats reserved for women, but Ms. Chaudhary emphasized that efforts are needed to make sure that women can compete in elections. 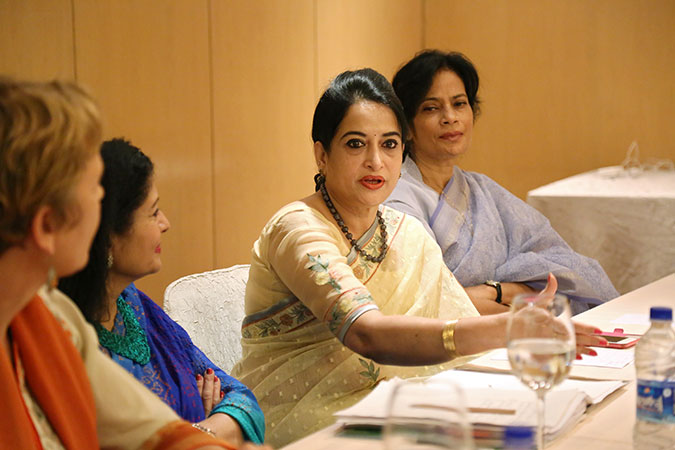 “Child marriage is still widely practiced in Bangladesh. At 52 percent, Bangladesh has one of the highest rates in the world...due to an array of reasons, including poverty and desperation," said Marcia Bernicat, US Ambassador to Bangladesh, at the Roundtable with ‘Ambassadors for Change’. "The Government needs to set the minimum age at 18 without any exceptions. Let’s give girls the chance to grow up safely, educated,” she added.