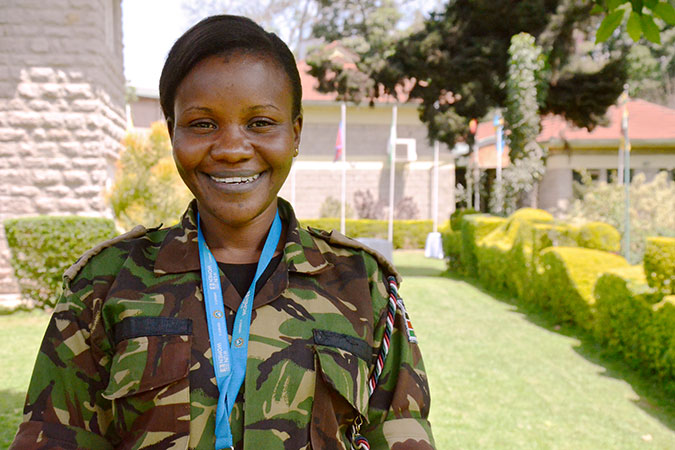 For Captain Grace Ajierh, joining the army was a dream come true. “It started with the love of the uniform and with the responsibilities that came with it,” she reminisces about her motivation to join the armed forces. “When I wear the uniform, I feel at home.”

Captain Ajierh, from Kenya, is among 41 female military officers from 31 countries who just completed the fifth edition of the Female Military Officers Course co-organized by UN Women and the International Peace Support Training Center (IPSTC) in Nairobi, Kenya, from 28 November – 9 December. The training provided opportunities for professional advancement to the immensely talented women in the armed forces and encouraged the deployment of more women from troop-contributing countries, particularly for protection related tasks.

Kenya is ranked first in the world, among troop-contributing countries that essentially make up the UN peacekeeping troops, for the deployment of female military officers. More than 19 per cent of the Kenyan peacekeeping troops deployed in the field, including military experts, are women, followed by South Africa at 18 per cent. Sixteen years since the landmark UN Security Council resolution 1325, which called for women’s participation in peacebuilding, and in spite of the growing recognition of women’s pivotal role in securing lasting peace, they constitute only three percent of the UN peacekeeping operations, overall [1].

Captain Ajierh is currently in charge of Legal Affairs at the Kenyan defence headquarters. She had served in the UN mission in South Sudan, first as a legal officer, then as a Platoon Commander of an all-women platoon, a rarity. “We were able to come up with a platoon strength of only female peacekeepers in the mission, which is not something that you get every day,” stresses Ajerh. She is proud that Kenya is ahead of most in terms of deployment of female peacekeepers.

“The Course is very effective. I am coming from a mission in South Sudan and everything that I was charged to do there is relevant to what I am learning now. These are gender-related issues, women’s issues, looking at the aspects of how vulnerable groups are affected and how I can be effective in my role as a peacekeeper,” said Captain Ajierh about the training. She is confident that the training will help her in future deployment and she is better equipped to train female peacekeepers on gender-related issues.

For Major Catherine Kipngok, an officer in charge of personnel services at the Kenya Defense Forces, who has been deployed in two peacekeeping missions in South Sudan and in Central Africa Republic, the training has been an eye-opener. “I wish I had attended this course before going there,” she said. “There is a lot that I could have done as a female military officer if I had this knowledge prior to being deployed.”

In her opening remarks at the training, UN Women Country Director, Zebib Kavuma said: “Women, men, girls and boys experience violence before, during and after armed conflicts differently and have different vulnerabilities, insecurities and coping mechanisms. However, the reality remains that women and girls continue to pay a high toll, given the gender roles assigned by society and their vulnerabilities. Therefore, the policy frameworks and response efforts should include gender equality as one their guiding principles.”

Recently, more than 60 countries, including Kenya, committed to double the number of women in the military in peacekeeping operations by 2020, and to reach at least 15 per cent of female representation among military experts. UN Women in Kenya has supported the Ministry of Defence to develop its first-ever gender policy to integrate gender concerns into the work of the Ministry.

Related News
24/10/2022
Kenyan women lead peace efforts in longstanding conflicts
25/07/2019
In the words of Dorcas Amakobe: “We take girls when they are nine years old and give them a chance to be bold”
12/04/2016
Women police climb the ranks across Africa
08/03/2016
From where I stand: Lucy Nduati
24/10/2014
Braving dust storms, women plant seeds of hope at the Dadaab refugee camp
END_OF_DOCUMENT_TOKEN_TO_BE_REPLACED