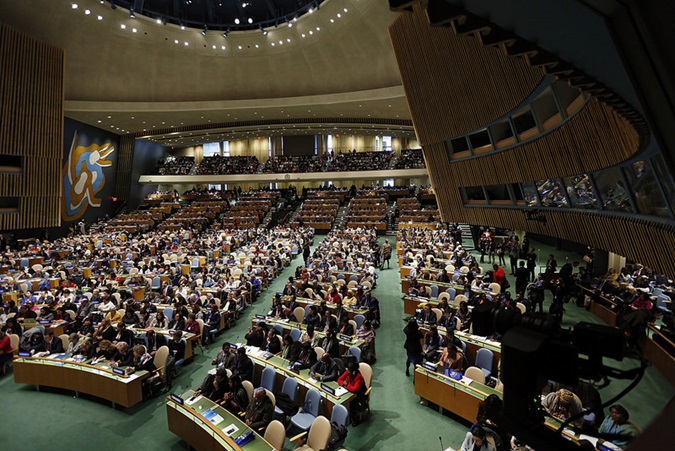 Opening of the 60th session of the Commission on the Status of Women. Photo: UN Women/Ryan Brown

Three of the world’s worst humanitarian crises in the world are in the Arab Region. Five of the countries in the regions—Syria, Iraq, Yemen, Libya and Palestine—are going through open or protracted conflicts. Many more countries are dealing with the consequences of these conflicts with a constant influx of refugees and an alarming rise of violent extremism.

“If we’re not supporting women on the ground, terrorism will continue"- @mayamorsy, National Council for Women, #Egypt. #CSW60

Amid the chaos, women are struggling, not only to cope with their new, conflict-ridden lives, but also to reach the peacemaking tables and make their voices heard. On 15 March at the Permanent Mission of Ireland to the UN in New York, a side event to the 60th Commission on the Status of Women featured a rich discussion by Arab women activists about women’s contribution to the peacebuilding processes across the region.

Mouna Ghanam, a Syrian peace activist, joined the conversation from Geneva, where she serves as part of the recently formed Women’s Advisory Board to the UN Special Envoy for Syria, Staffan de Mistura. Building on years of UN Women’s work with Syrian women activists to galvanize a unified women’s peace agenda, Special Envoy de Mistura had invited in January this year 12 women representatives of Syrian civil society to form an Advisory Board to contribute to peace talks. “This advisory board is only the first step,” said Ms. Ghanem through video conference, “what we are aspiring for is not only participation, we’re aspiring to be the decision-makers and we have a long way to go.”

.@mounaghanem - we don't just want women at the Syrian peace talks but the women's agenda to be on the table #CSW60 pic.twitter.com/NEK1eugwZp