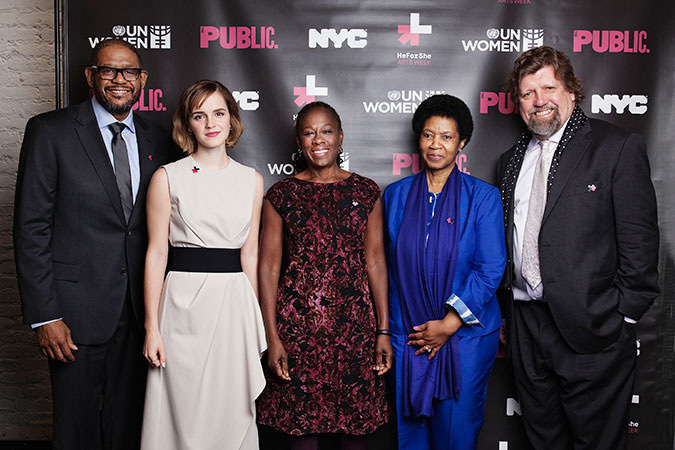 The 2016 theme for International Women’s Day is “Planet 50-50 by 2030: Step It Up for Gender Equality”, with a focus on mobilizing momentum for the recently adopted 2030 Agenda which addresses key challenges of the 21st century, such as poverty, inequality, and climate change. UN Women Goodwill Ambassador Emma Watson, SDG Advocate and UNESCO Special Envoy for Peace  Forest Whitaker, First Lady of New York City Chirlane McCray, UN Women Executive Director Phumzile Mlambo-Ngcuka, The Public Theatre’s Artistic Director Oskar Eustis, and others took part in a lively discussion on the powerful role arts have in evolving the behaviours, norms and perceptions that shape our culture and views of women’s rights and gender issues.

“The Arts are an integral part of everyday life, both reflecting and shaping our sense of identity, our attitudes and our cultural values. I hope that this partnership with the arts community will foster new questions and new conversations on women’s rights and gender equality and inspire cultural change and action at individual as well as at national and global levels,” said UN Women Executive Director Phumzile Mlambo-Ngcuka.

“Art makes people think and question, and people change the world. Indeed, for women from Jane Austen to Maya Angelou, art has been one of the most effective ways to make our voices heard,” said First Lady of New York City Chirlane McCray. “Our world works best when everyone has the opportunity to succeed, but we are not there yet—not even close. Too many women don't feel safe in their own homes and public spaces. Too many women are unheard in our political system, and under-appreciated in the workplace. We must continue using our art as a megaphone. That's why I am honoured to partner with HeForShe and the Public Theater for New York Arts Week.”

The HeforShe Arts Week will run from 8-15 March 2016, during which time over 30 partner institutions throughout the city of New York—ballets, operas, Broadway shows, music concerts, theatres, cinemas, galleries and museums—will highlight efforts towards gender equality and women’s rights, and support UN Women’s work by donating a percentage of proceeds.

“The arts give us license to experience something new, to express ourselves, and to openly question our culture. Join us in creating an equal world where all of our stories can be seen and heard,” said Emma Watson at the event.

“The arts have the power to destroy gender stereotypes and biases that make all of us less free,” said Forest Whitaker.

Other events taking place as part of UN Women’s HeForShe Arts Week are:

Lighting of the Empire State Building with the HeForShe magenta colour.

Learn more: On 8 March, 2016 the Empire State Building will be lit magenta in honour of UN Women’s

Photos from the events will be available at: https://www.dropbox.com/sh/gbipe7oiklrr0hf/AACk-vXtbB1cw5aXyyclWKJKa?dl=0