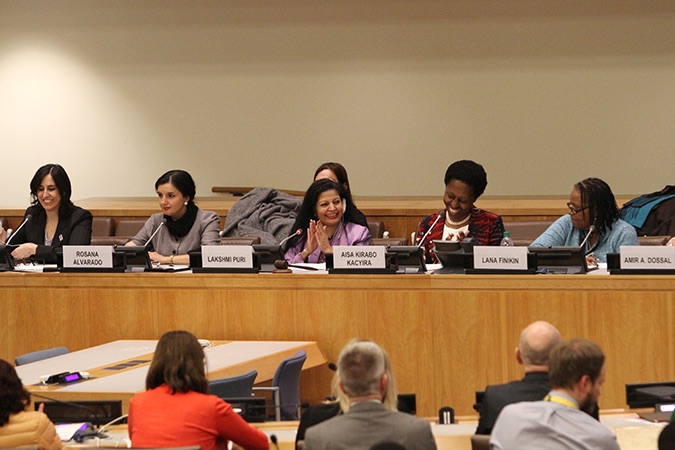 On behalf of UN Women, UN Habitat and the Huairou Commission, I would like to welcome and introduce our panellists today. They are:

Our gratitude also extends to our co-sponsors of the session: the Governments of Ecuador, the Republic of Korea and Spain.

I am pleased to be with you as part of this multisectoral panel of urban actors to share insights, strategies, tools and good practices, which can ensure that gender equality, women’s empowerment and the elimination of violence against women and girls are at the front and centre of the new urban agenda.

It will be critical to ensure that a transformative 2030 Agenda is matched by—if not further enhanced and informed by—the implementation of a transformative urban agenda with processes leading up to Habitat III, which will take place from 17 to 20 October, 2016 in Quito, Ecuador to inform the outcome document.

Two decades ago, at the second United Nations Conference on Human Settlements Habitat II in Istanbul, the international community recognized that “Women have an important role to play in the attainment of sustainable human settlements. Nevertheless, as a result of a number of factors, including the persistent and increasing burden of poverty on women and discrimination, women face particular constraints in obtaining adequate shelter and in fully participating in decision-making related to sustainable human settlements.”

Furthermore, it was also recognized that “the empowerment of women and their full and equal participation in political, social and economic life, the improvement of health and the eradication of poverty are essential to achieving sustainable human settlements.”

Since the second United Nations Conference on Human Settlements, the world has changed dramatically. The figures are conclusive. In the early 1990s, the percentage of people living in urban areas was just over 42 per cent, while in 2015 it was 54 per cent, and in 2030, it is expected to be 60 per cent. Within the urban population, there is an increasing cluster of large cities underway, in particular those with more than 5 million people. This transformational process is being particularly felt among the least developed countries.

We have seen the critical role that urbanization continues to play in accelerating development, how it impacts social cohesion, inclusion, environmental protection, participation and gender equality. Yet the record is mixed. While urbanization patterns have been successful in terms of generating economic growth, they signal less success in the other areas, including in advancing gender equality.

Indeed, the majority of women in urban settlements continue to face multiple challenges, and too often, women’s contributions to city life and creating safe cities and safe public spaces, are unacknowledged or under-resourced.

The Habitat II Outcome recognized that “women face constraints in obtaining adequate shelter and in fully participating in decision-making related to sustainable human settlements.” This statement continues to be relevant.

Let us note that this correlation between gender equality and urban sustainable development has been recognized in the 2030 Agenda, which stresses the role of efficient urbanization as the right path towards sustainable development. While SDG 11 calls for making cities and urban settlements inclusive, safe, resilient, sustainable, and commits to provide universal access to safe, inclusive and accessible, green and public spaces, with explicit reference to women—the preamble of the 2030 Agenda states that “the 17 Sustainable Development Goals and 169 targets seek to realize the human rights of all and to achieve gender equality and the empowerment of all women and girls. They are integrated and indivisible and balance the three dimensions of sustainable development: the economic, social and environmental.”

The challenge and the opportunity that the new urban agenda provides is ensuring that gender equality thrives through sustainable, gender inclusive and gender-responsive cities.

We have a great opportunity to build on lessons learned and scale up evidence-based and human rights-based multisectoral strategies to eliminate violence against women and girls, including city-specific programming such as the Safe Cities and Safe Public Spaces Global Flagship Initiative, with a shared vision that women and girls are socially, economically and politically empowered in public spaces, free from sexual harassment and other forms of sexual violence. The Initiative that is in 22 cities continues to grow and involves strategic partnerships with national and local governments, women’s organizations, other civil society partners, UN-Habitat, UNICEF, and many global and local partners, including the Huairou Commission.

Today we know that effective urban planning can be a powerful engine to gender-responsive sustainable development. The mainstreaming of gender, throughout all municipal departments with budgets can ensure positive results with quality jobs and social prosperity for all.

The event today provides the opportunity to influence the process towards Habitat III and to advocate for the full recognition of the important contributions of women in the new urban agenda, which will provide guidance to urban actors on achieving sustainable urban development in the next 20 years.

We are fortunate to have a list of distinguished speakers who will share their experiences and perspectives on how to ensure that gender equality, women’s empowerment and ending violence and discrimination against women is placed front and centre of the outcome document for Habitat III, in order to strategically support the implementation of the 2030 Agenda for Sustainable Development and the SDGs using human settlements and urbanization as a vehicle for change.

Related News
15/03/2016
“We cannot afford to fail”—Deputy Executive Director Lakshmi Puri
15/03/2016
“We need to respond to violence against women and girls as a matter of urgency”—Deputy Executive Director Lakshmi Puri
19/03/2014
Interview with Osami Takeyama, Mayor of Sakai City, as it joins the UN Women Safe Cities Global Initiative
10/03/2014
Remarks by Lakshmi Puri at a CSW58 side event on Trafficking in human beings
12/02/2014
African Union gender equality ministers adopt common position on the post-2015 development agenda
END_OF_DOCUMENT_TOKEN_TO_BE_REPLACED