Remarks by UN Women Deputy Executive Director Lakshmi Puri at the Opening of the Review Theme on the Elimination and Prevention of All Forms of Violence against Women and Girls, at the 60th session of the Commission on the Status of Women on 15 March, 2016 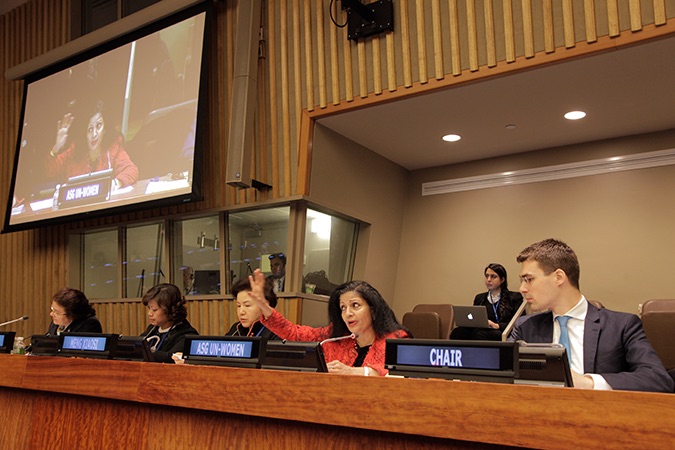 UN Women Deputy Executive Director Lakshmi Puri at the Opening of the Review Theme on the Elimination and Prevention of All Forms of Violence against Women and Girls, at the 60th session of the Commission on the Status of Women. Photo: UN Women/J Carrier

Vice-Chair of the Commission on the Status of Women,
Excellencies,
Distinguished Colleagues from Civil Society and the United Nations,
Ladies and Gentlemen,

I am honoured to be here with you this morning, to open the 60th session of the Commission on the Status of Women (CSW) on its review theme—the Elimination and Prevention of All Forms of Violence against Women and Girls.

This theme is of paramount importance to not only the gender equality, women’s empowerment and women's human rights agenda and its achievement, but also to addressing a global pandemic of violence against women that has taken various horrifying and dehumanizing forms in different contexts and spaces and that has huge economic, social and human cost and suffering for all.

Please note this transformation. With the 2030 Agenda, the elimination of violence against women is not only about gender equality, but a sustainable development objective which targets all countries. At the Global Leaders’ Commitment Meeting, 70 per cent of the 72 Heads of State made specific commitments on the elimination of violence against women.

The Agreed Conclusions of the 57th session on eliminating all forms of violence against women and girls was a path-breaking progressive compact among Member States and a comprehensive Plan of Action emerged covering key aspects of effectively addressing this widespread and stubborn phenomenon and violation of human rights of women—prevention, protection, prosecution of perpetrators, access to justice and multisectorial response, and support to victims and survivors.

Before I present the Secretary-General’s report, I would like to announce that the Global Database on Violence against Women was launched yesterday by UN Women. Coinciding with this year’s discussion on the review theme, the database is a tool to review measures taken by Member States to address violence against women, in the areas of laws and policies, prevention, services, and statistical data, as well to monitor the implementation of the SDGs and the 2030 Agenda’s target areas on violence against women.

It is my honour to present the Secretary-General’s report on the review theme. In accordance with the resolution E/RES/2015/6 adopted by the Commission at its 59th session, this year, for the first time, the Commission is applying new working methods in evaluating progress in the implementation of the agreed conclusions of a priority theme from a previous session, including through a report from the Secretary-General.

The Secretary-General’s report contributes to the review of CSW 57 agreed conclusions by analyzing measures taken by Member States at national level to implement the agreed conclusions, and identifying gaps, challenges and ways to support accelerated action to eliminate and prevent such violence.

It is clear that the agreement reached at CSW 57 generated renewed momentum for Member States, the UN system and other stakeholders to take action and to strengthen their knowledge base and partnerships.

This review highlights that the agreed conclusions from CSW 57 have further strengthened the normative framework on the elimination and prevention of violence against women and girls and have provided impetus for other intergovernmental processes addressing this issue, including the specific formulation of SDGs 5, 11 and 16, and their respective targets. Several States have explicitly acknowledged the important role of the Commission in addressing gender inequality and violence against women and girls, and the importance of the agreed conclusions as a comprehensive roadmap for achieving this objective.

States have continued to strengthen legal, policy and accountability frameworks, awareness-raising, capacity-building and educational programmes; improve multisectorial services, as well as collecting and analyzing data and carrying out research. Improved knowledge is also increasingly available on what works in relation to preventing violence—by addressing its root causes.

Furthermore, it is clear that the agreed conclusions have also generated renewed momentum for the United Nations system to strengthen their inter-agency collaboration. For example, the development and launch of the first ever UN Framework for Preventing Violence against Women and the Essential Services Package for Women and Girls Subject to Violence–Core Elements and Quality Guidelines (2015).

Despite these advancements, however, the report of the Secretary-General equally acknowledges that progress to Ending Violence against Women and Girls has been slow and uneven and challenges still remain. The report specifically points to:

In order to implement the agreed conclusions and the broader normative framework on violence against women and girls and accelerate progress, the report recommends that Member States should, with a sense of urgency, implement and build on existing commitments already made, including those made at the recent Global Leaders’ Meeting on Gender Equality and Women’s Empowerment: “A Commitment to Action.”

It further stresses that Member States should continue to address gender inequality and discrimination as the root causes of violence of women and girls and adopt a comprehensive approach for the prevention of and response to ending violence against women and girls.

I am heartened by the fact that so many of your Governments wished to participate in this peer review today and share your experiences of addressing violence against women and girls in your respective countries. This will add significantly to the discussion and to the implementation of the agreed conclusions. It is clear evidence of your confidence in the agreed conclusions as a roadmap for ending violence against women and girls and also of your continued commitment to end this scourge.

I also take this opportunity to call attention to the important role of civil society in the implementation of the agreed conclusions, which is crucial and also requires recognition.

Now is the time to act—we must further leverage the strength of international agreements and frameworks and build upon existing commitments to end all forms of violence against all women and girls. The removal of systemic, gender-based discrimination and the political, economic and social empowerment of women and girls is key to reducing their vulnerability to such violence and realizing many of the other Sustainable Development Goals. It is a matter of urgency—we cannot afford to fail.

Related News
16/03/2016
“Fear of violence affects the everyday lives of women and girls” — Lakshmi Puri
15/03/2016
“We need to respond to violence against women and girls as a matter of urgency”—Deputy Executive Director Lakshmi Puri
10/03/2014
Remarks by Lakshmi Puri at a CSW58 side event on Trafficking in human beings
12/02/2014
African Union gender equality ministers adopt common position on the post-2015 development agenda
04/03/2013
Remarks by Lakshmi Puri at CSW57 side event : “Violence against Women – Our Concern, Our Response”
END_OF_DOCUMENT_TOKEN_TO_BE_REPLACED