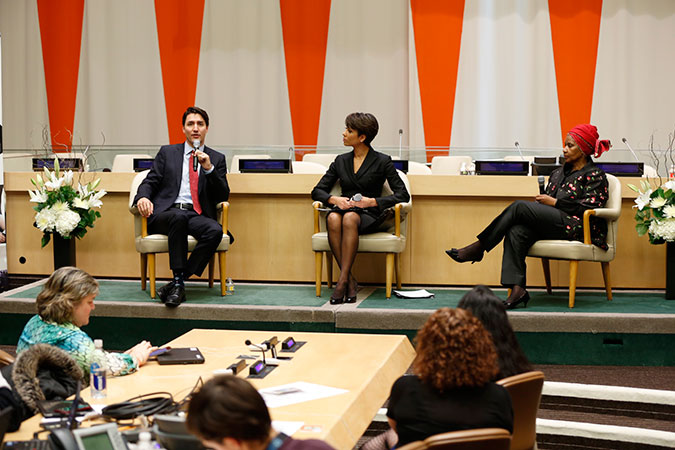 “For me, it’s just really obvious. We should be standing up for women’s rights and trying to create more equal societies—duh!... I take the positive attention that we’re getting right now as an encouragement to be making sure that we are doing even more and indeed participating in a global movement to address this in every country around the world at the same time,” said Prime Minister Trudeau. “This needs to be seen not as a women’s movement but as a global movement… We need to challenge folks to step up.”

A self-proclaimed feminist, he gained global acclaim for his matter-of-fact response to a question about why he appointed a gender-equal Cabinet last year: “Because it’s 2015.” At the high-level event today, Prime Minister Trudeau explained that in order to be able to appoint such a cabinet, his team deliberately sought out women to come forward as candidates. He also stressed continued efforts to retain women in leadership and foster better work-life balance in the workplace.

“To any world leader that tells me: ‘I’d love to, I just can’t do that with the current configuration’… I say ‘Well, what are you doing to change that configuration and draw out those extraordinary women who can’t be the leaders we need them to be’?” said Prime Minister Trudeau. “This is the way the world needs to go and this is the way we’re going make it go—together.”

During the intimate and candid conversation, he said Canada still needs to do more to reduce wage inequality and confront violence against women, particularly against indigenous women. UN Women’s Executive Director stressed the importance of national legislation to end discrimination, achieving the new Sustainable Development Goals by 2030, and strong leadership “to dramatically change the landscape”.

“We insist in UN Women that the struggle for gender equality is not just for women—it is for everybody, and those with authority and power, especially; they must lead from the front,” said Ms. Mlambo-Ngcuka. “The Prime Minister had the authority to appoint a 50-50 cabinet. Leaders must use the authority that they have.” 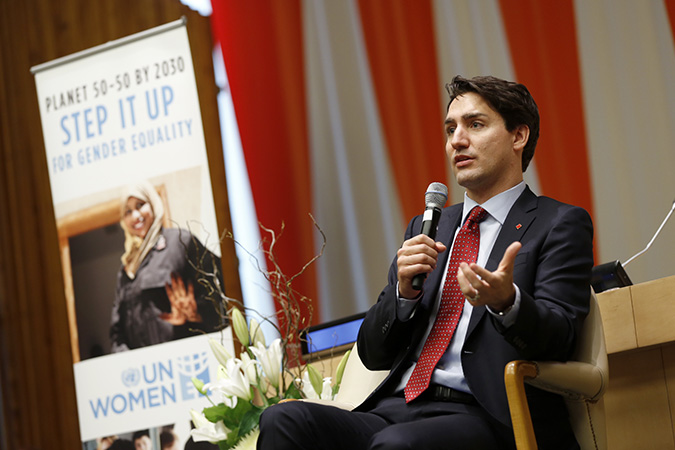 Stressing the importance of engaging more men on gender equality, Prime Minister Trudeau said: “Why is it that every time I say I’m a feminist, Twitter explodes and news media’s feeds pick up? It shouldn’t be something that creates a reaction.”

Ms. Mlambo-Ngcuka thanked the Canadian Prime Minister for his feminist leadership and ceremoniously pinned him as the newest champion of UN Women’s signature HeForShe campaign, which seeks to engage more men for gender equality. “This fight is big; it needs to be diversified; and mobilizing and working with men and boys has been a critical strategy for UN Women,” she said.

Moderated by Sade Baderinwa, Emmy Award-winning journalist of WABC Channel 7, the discussion was the first segment of a two-part high-level event on Gender Equality and Global Call to Action on Equal Pay organized by UN Women during the 60th session of the Commission on the Status of Women (CSW60).

Echoing Prime Minister Trudeau and Ms. Mlambo-Ngcuka on the need for joint efforts, Ms. Wambach said: “We all just have to come together to fight this battle, to have one giant voice, and we can actually make more policy to make sure that none of these injustices continue to happen.” 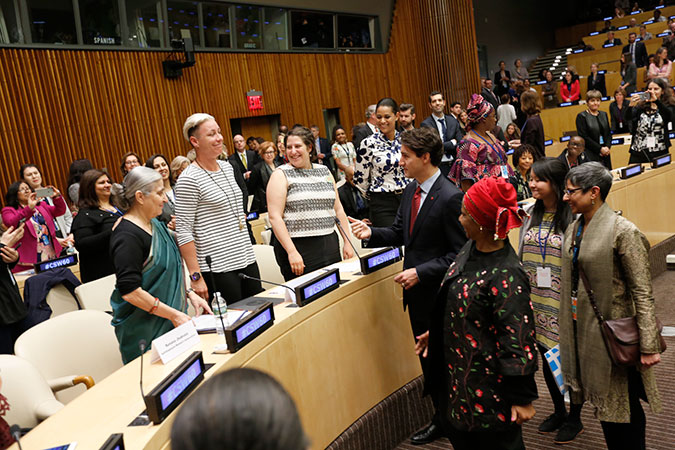