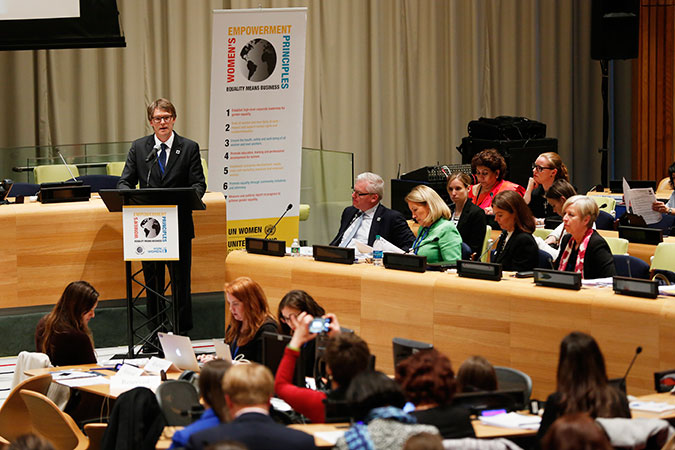 In the keynote address, Luis Guillermo Solís Rivera, President of Costa Rica urged: “The time is right. International consensus has been reached, at Beijing+20 and in Agenda 2030, about the importance of women's empowerment in the global sustainability agenda.” He emphasized that “a society that puts gender equality at its forefront not only grows economically but becomes more human.”

UN Secretary-General Ban Ki-moon explained: “We cannot achieve our Sustainable Development Goals without securing the full and equal rights of half of the world’s population, in law and in practice.” He noted that: “when companies invest in women, they see a range of benefits and a return on investment. It is clear that gender equality is a business issue.”

The Women’s Empowerment Principles – a partnership initiative of the UN Global Compact and UN Women – provide companies with an integrated and proven approach to unlocking the power of women in business and society. It is the largest business-led gender equality initiative in the world endorsed by more than 1,100 CEOs from 80 countries. Held in conjunction with the 60th Commission on the Status of Women, this year’s annual event spotlighted companies that are implementing the WEPs to achieve the SDGs, step up action, and find innovative ways to partner and advance gender equality.

"By 2030, there should be no inequality, no injustice, when it comes to men and women." - #UNSG Ban Ki-moon #WEPs pic.twitter.com/ftAfA0aNSA

Phumzile Mlambo-Ngcuka, Executive Director of UN Women, stressed the importance of partnerships and collaboration with business to achieve gender equality, stating: “The engagement and commitment of the private sector to gender equality are essential to reaching the Agenda 2030 goals and aspirations. Gender equality and sustainability must be integral to every business plan and strategy.”

Lise Kingo, Executive Director of the UN Global Compact, told participants: “We have not reached the tipping point on gender equality. It’s time that we have honest conversations about what is really holding women back. We need to end bias, both overt and unconscious. We must recognize that gender equality is not just a women’s issue—it’s a men’s issue, a family issue, a community issue and a business issue.”

To help accelerate progress, the development of a new gap analysis tool was announced by the Inter-American Development Bank, the UN Global Compact and UN Women, along with supporting partners from business and government. The tool will assist companies in identifying gaps in gender equality and scale up implementation of the Women’s Empowerment Principles.

Since 2013, the Annual Event has included the presentation of the Women’s Empowerment Principles CEO Leadership Awards, acknowledging business leaders for championing gender equality and implementing the principles, in particular Principle One which urges CEOs to lead by example.

"Women’s rights are not just human rights, they are also the cornerstone of progress of any society"- @MorenoBID of @the_IDB #CSW60 #WEPs

Conferring the awards, Joseph Keefe, Co-chair of the WEPs Leadership Group and President and Chief Executive Officer of Pax World Funds, said: “The WEPs are an effective tool to advance women in business and society. The WEPs CEO Leaderships Awards bring to life concrete actions and measurable impacts that are changing workplaces, marketplaces and communities. As a previous Awards recipient, I know that this prestigious award gives companies encouragement to press forward with this important work.”

Standing ovations at #WEPs event for @GlobalCompact, who will no longer participate in all-male panels. #CSW60 pic.twitter.com/9rD9NSH5DO

Related News
04/10/2013
Ukraine steps up efforts to get more women into the workforce
15/06/2016
Statement by UN Women Executive Director Phumzile Mlambo-Ngcuka on the fifth anniversary of the Domestic Workers Convention
01/05/2015
Decent work for women: an infographic for International Workers' Day 2015
08/04/2013
Domestic workers gain equal rights in Brazil
05/07/2012
UN Women calls for more women and social protections in the workplace as key to global economic recovery
END_OF_DOCUMENT_TOKEN_TO_BE_REPLACED