UN Women Goodwill Ambassador Nicole Kidman proudly wears a necklace made by women survivors of violence to benefit initiatives aimed at ending this pandemic human rights violation that affects one in three women and girls worldwide. 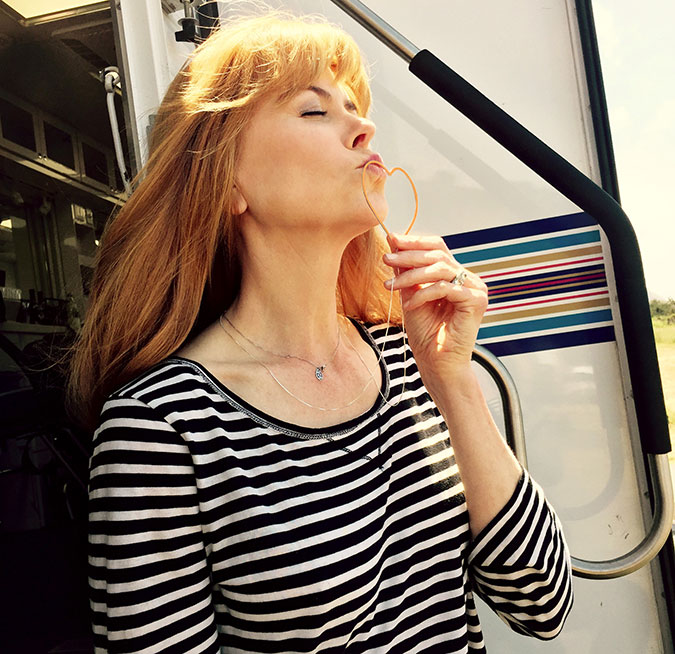 The Orange Heart necklace was created by SeeMe, a fair-trade-certified organization, on the occasion of the 20th anniversary of the UN Trust Fund to End Violence against Women, which is managed by UN Women. Every handmade SeeMe necklace provides sustainable livelihoods and promotes the economic independence of women survivors of violence in Tunisia. Fifty percent of the proceeds from the sale of the Orange Heart necklaces will provide life changing support to over 180,000 women and girls that directly benefit from UN Trust Fund supported projects each year.

“For 20 years, the UN Trust Fund to End Violence against Women has supported inspiring initiatives to end violence against women around the world. Its mission is a cause very dear to me”, says Nicole Kidman. “I am proud to wear the ‘Orange Heart’ necklace created by survivors of violence.”

“On our 20th anniversary, we thank our great supporters, like Nicole Kidman, as we strive together to create a brighter future, free from violence, for all women and girls,” said Aldijana Sisic, Chief of the UN Trust Fund.

A testimony to the global consciousness that violence against women and girls is neither inevitable nor acceptable, the UN Trust Fund supports actions to meet the most urgent needs of women and girls and their communities. Since its establishment in 1996, it has supported organizations in more than 130 countries to prevent violence, provide access to services for survivors and support the implementation of laws.

The Orange Heart Necklace can be purchased in two sizes for E100/E130 at seeme.org.

Related News
17/11/2016
Press release: Luminaries, activists and artistes come together to spotlight life-changing interventions on ending the pandemic of violence against women and girls
05/06/2012
UN General Assembly cultural event will spotlight efforts to end violence against women
29/12/2020
Op-ed: The roles I've played brought home to me the scourge of violence against women
12/09/2018
Press release: Her Royal Highness Princess Eugenie of York visits UN Trust Fund grantees in Serbia
11/06/2018
Speech: “Ending FGM is possible in our generation. It is no longer a dream”—Jaha Dukureh
END_OF_DOCUMENT_TOKEN_TO_BE_REPLACED