Press release: Luminaries, activists and artistes come together to spotlight life-changing interventions on ending the pandemic of violence against women and girls 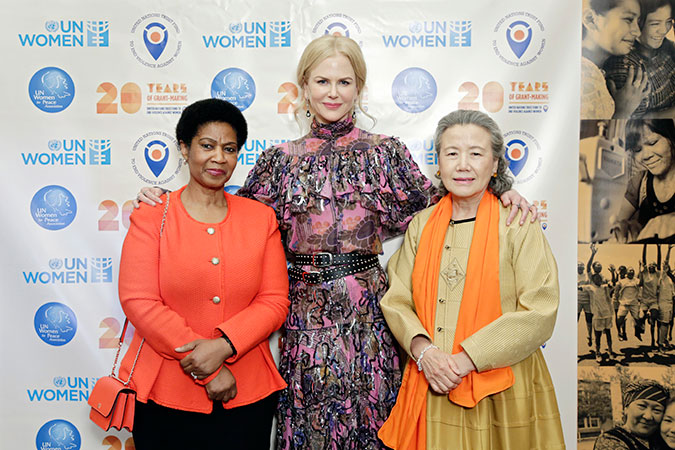 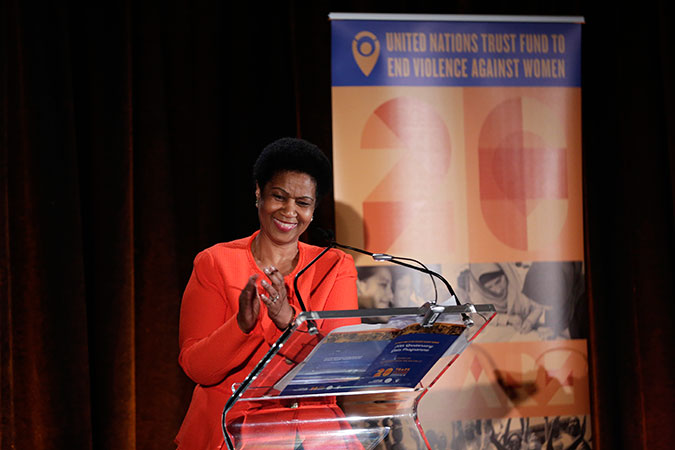 “Tonight we celebrate the essential work done by the UN Trust Fund, paying tribute to our grantees, whose success stories embody the resilience of women and girls in the face of violence,” said Phumzile Mlambo-Ngcuka, UN Women Executive Director. “We know that these vital investments in initiatives to end violence have high returns and have already made a difference to millions of women and girls. But there is a great deal more to do to scale up prevention and increase appropriate services, and that needs more funding so that we can bend the curve down and bring the scourge of violence against women to an end,” she added.

Violence against women and girls is now part of the public discourse much more than ever before, along with significant progress in legislation and grassroots efforts to address the issue. Yet, it continues to be a gross human rights violation of pandemic proportions. Today, one in three women worldwide have experienced physical or sexual violence—mostly by an intimate partner. The UN Trust Fund to End Violence against Women is the only global grant-making mechanism dedicated to eradicating all forms of violence against women and girls. Managed by UN Women, on behalf of the UN system, during the last 20 years, more than 400 organizations have been supported by the UN Trust Fund with results that indicate sustained resources and dedicated work can lead to the prevention and elimination of violence against women and girls. Focusing on prevention of violence, implementation of laws and policies, and improving access to vital services for survivors, the UN Trust Fund has spent the past 20 years focused exclusively on funding life-changing programmes for millions of women and girls.

“I am here because I support the UN Trust Fund and I applaud and celebrate its 20 years of making a difference,” said Nicole Kidman, UN Women Goodwill Ambassador. “When I became UN Women’s Goodwill Ambassador 10 years ago, my first mission took me to Kosovo, where I met with women and girls who had survived violence. That was when I first understood what the work of the UN Trust Fund really means. I saw first-hand the real difference it makes in lives of women and girls: They found shelter for themselves and their children. They received counseling to overcome the horrific trauma of rape during the war that had ravaged the Balkans. They were supported to make a living and stand on their own. It was a life-changing experience for me and one that has inspired me ever since. This is why, as UN Women’s Goodwill Ambassador, I see my role as that of an advocate to end violence against women and girls.”

During the event, Mrs. Ban Soon-taek, Patron of the UN Women for Peace Association, a key supporter of the UN Trust Fund, was presented with the UN Trust Fund’s Orange Heart, for her outstanding efforts to end violence against women and girls.

Moderated by NBC journalist Richard Lui, with an Honorary Host Committee comprised of actors and actresses Sir Patrick Stewart, Danai Gurira, Ruth Wilson, Gillian Anderson, and Kelly LeBrock as well as luminaries such as Kweku Mandela, the event brought together 300 people at the Loeb Boathouse in New York’s Central Park, who heard moving stories of impact and change from beneficiaries of UN Trust Fund-supported projects.

Every $12 donated to @UNTrustFundEVAW allows us to make a difference for one woman or girl. https://t.co/lgdoI3q3Sx #UNTF pic.twitter.com/YbRhNlKISJ

Stories of change underlined the high-profile event. Award-winning journalist Ann Curry interviewed seventeen-year-old Aiturgan Dzholdoshbekova from Kyrgyzstan, who recounted how a local UN Trust Fund-supported project to prevent bride-kidnapping became a beacon of light and hope for her, and transformed her life.

“We are very happy to be in a school free from violence. We were able to change the situation of girls in our families and in our schools,” said Dzholdoshbekova. “The boys have started to understand the issue and are advocating [with us]. The school has become a safe space where we can be happy, educate and develop ourselves,” she adds.

Tommy Clark, the Founder and CEO of South African NGO Grassroots Soccer and a grantee of the UN Trust Fund, was also interviewed by Ann Curry live onstage and spoke about an innovative sports-based intervention to empower girls and prevent HIV and gender-based violence.

Renowned theatre actress Nehassaiu deGannes narrated  the inspirational stories of two other beneficiaries—a woman in Gambia who will no longer subject her daughter to Female Genital Mutilation, a harmful traditional practice that affects at least 200 million girls today; the other a girl in Cambodia who feels safer at her work in a factory.

“We need to use the power of fashion to end violence against women” - @FCorner at @UNTrustFundEVAW gala. #OrangeLabelProject #UNTF pic.twitter.com/aH6Plw6ntK

The gala also saw the official launch of the Orange Label, the result of a partnership between the UN Trust Fund and the UK-based prestigious London College of Fashion, which aims to adorn a variety of products and engage small and large scale companies around the world. Designed by students of the college, the Orange Label will be used as a brand for cause-related marketing initiatives to benefit UN Trust Fund supported programmes. Through the fashion and associated industries, the Label will connect the private sector and UN Trust Fund supported programmes in joint efforts to prevent and end the pandemic of violence against women and girls. 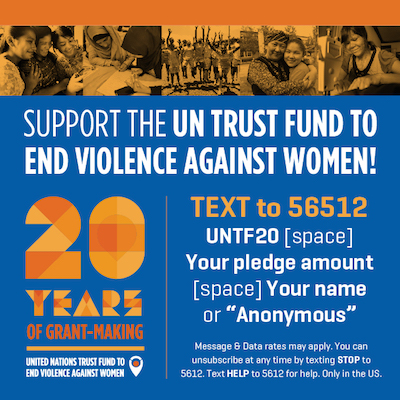 The evening concluded with a high-powered rendition of the song Rise Up, performed by Jayna Brown, a young musician who was recently a semi-finalist on the hit TV show, America’s Got Talent.  Guests rose up to showcase their support and commitment to enable the UN Trust Fund to continue their life-changing work.

Donations to the UN Trust Fund can be made by text, or via the website.

Photos and B-roll footage of the event is available here.

Watch the Facebook Live of the event, check out a storify summary of the social media coverage and follow @UNTrustFundEVAW, @UN_Women and #UNTF on Twitter to continue the conversation.

UN Women is the UN organization dedicated to gender equality and the empowerment of women. A global champion for women and girls, UN Women was established to accelerate progress on meeting their needs worldwide. UN Women was created to be a dynamic and strong champion for women and girls, providing them with a powerful voice at the global, regional, and local levels. Grounded in the vision of equality enshrined in the UN Charter, UN Women, among other issues, works for the  elimination of discrimination against women and girls; empowerment of women; and achievement of equality between women and men as partners and beneficiaries of development, human rights, humanitarian action, and peace and security. Website: www.unwomen.org

The UN Trust Fund to End Violence against Women