Ndyandin Dawara recently made a momentous decision: she decided she would not subject her daughter to Female Genital Mutilation (FGM). 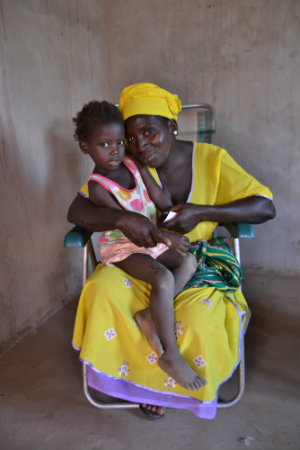 Ndyandin Dawara, trained by GAMCOTRAP and who is a survivor of FGM, shares that she will not subjugate her daughter to FGM. Photo: UN Trust Fund Monitoring and Evaluation Specialist/Gemma Wood

FGM is a long-running harmful traditional practice in her community in Gambia that has led generations of women to a lifetime of pain, a lack of control of their own bodily integrity and sexuality, and debilitating health risks, including death. The taboo surrounding the topic has impeded women to freely discuss their experiences of harm and suffering caused by FGM.

“We didn’t know how to speak out about it,” said Dawara. “In the workshop we talked about pertinent issues about FGM, something that affects our lives, that has been hurting us.”

Dawara made her decision after taking part in a training on ending FGM provided by the Gambia Committee on Traditional Practices Affecting the Health of Women and Children (GAMCOTRAP), an advocacy group supported by the UN Trust Fund to End Violence against Women. The UN Trust Fund is managed by UN Women on behalf of the UN System. Her husband is also involved, and now speaks out in the community and to other men about the profound damage FGM causes. Since 2015, the two-year project has engaged more than 300 women and 64 per cent of young mothers who attended sessions said they would not subject their daughter to FGM.

See the full story on the UN Trust Fund website.

Related News
20/05/2021
I am Generation Equality: Martha Clara Nakato, advocate for bodily autonomy and sexual and reproductive health rights in Uganda
01/02/2021
I am Generation Equality: Natalie Robi Tingo, community mobilizer for ending FGM
06/02/2020
Take Five: From awareness-raising to action, how trained paralegals in Uganda are stopping FGM
17/06/2019
UN Women Executive Director calls for action to end female genital mutilation and child marriage in an event in Senegal
15/11/2018
Traditional leaders across Africa move the needle against child marriage and FGM
END_OF_DOCUMENT_TOKEN_TO_BE_REPLACED