When her husband’s physical and psychological violence became unbearable, Dafina** went to the Domestic Violence Unit of the Kosovo Police. They interviewed her in a survivor-friendly investigation room that UN Women helped set up, where she could tell her story freely. They then escorted her and her baby daughter to a Safe House shelter, where they’ve now lived for seven months. 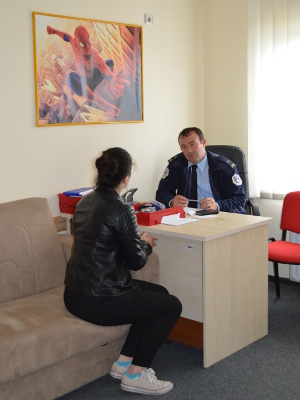 A Domestic Violence Investigator in the special investigation room funded by UN Women for domestic violence survivors and their children in the police station of the city of Gjakova. Photo: UN Women/Isabelle Jost

“If violence happens once, it will happen again. You must be courageous enough to end it before it gets worse and more dangerous—even if your husband is stronger than you, you should be brave and say, ‘Enough!’,” says Dafina.

Dafina will soon start a one-year paid internship organized by her shelter and the local employment office: “I have so many dreams I hope to fulfil: To get a job and become independent. To make the decisions for my life. To have a home and be with my daughter forever.”

Positive stories like Dafina’s are more common now in Kosovo, since a UN Women-supported project  in Kosovo has led to a better coordinated and more effective domestic violence response by police, the judiciary, NGOs, social welfare, shelters and other institutions working with survivors.

** Name has been changed to protect her identity

Read the full story on our regional website for Europe and Central Asia.