The day we carried the Olympic Torch for women and girls

By Thaiza Vitória, 15-year-old Brazilian handball player and member of the ‘One Win Leads to Another’ programme in Rio de Janeiro and UN Women Executive Director Phumzile Mlambo-Ngcuka. Both of them carried the Olympic Torch on the day of the opening ceremony of the Rio Games.

At first glance, we may seem worlds apart; two women from different countries and different generations. We met for the first time under the Olympic flame, and discovered that we are not that different: we share the burning hope of a world where gender equality is not a luxury, but the norm. When we walked side by side, sharing the great honour of carrying the Olympic Torch through the streets of Rio de Janeiro, Brazil, we represented more than just ourselves. We were there representing all women and girls - half the world’s population. 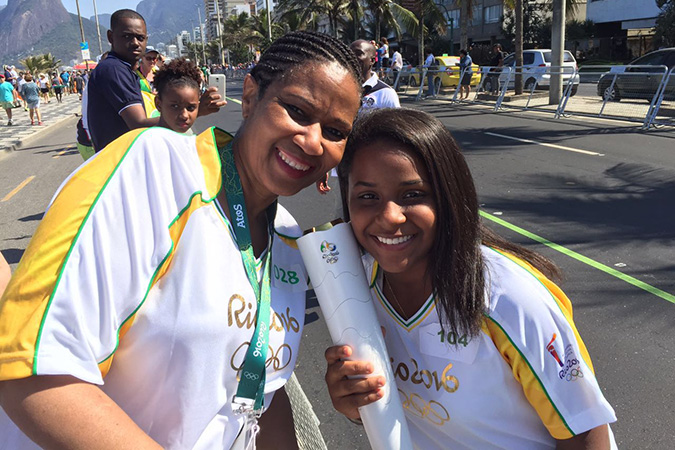 Historically, the Olympic Flame represents the value of purity and the runners who carry the Olympic Flame convey a message of peace on their journey. While carrying the flame, at this time of widespread conflict in the world, we thought of how important it is that women contribute to peace processes. We know that when women are present at the peace table it is considerably more likely that agreements will be signed and that peace will last. We also know that making peace is more complex than ending war. True peace comes to life through the right to live free from fear of violence, free from discrimination, fulfilling our full potential, in our families, communities, schools, work places or sport fields. With every step we took under that flame, we carried the Torch forward, and with it the message of gender equality.

In that brief walk we followed pioneering women such as sailor Hélène de Pourtalès, first female Olympic champion (1900); Enriqueta Basilio, first woman to light the Olympic Cauldron at the Olympic Games in Mexico City (1968), and Flor Isava Fonseca, the first woman to serve on the International Olympic Committee’s Executive Board (1990).

We carried the Olympic Flame cheering for the thousands of women athletes who will be part of the Rio Games and who, with their swiftness and endurance in the sports arena, increase women’s visibility as top-achieving sports icons, strategic thinkers, role models and leaders. We also raised the flame for all the young women and girls in even the furthest-flung villages who are fighting against all odds to play sport, stay on the field, and reap its benefits of broader freedoms.

Since women’s first participation in the Olympics in 1900 they have brought down gender barriers and reduced discrimination. Today, at the Rio Games, we are just under parity in terms of participants and events. Yet outside, entrenched obstacles remain to full equality. In Brazil, as in many other places around the world, adolescent girls and young women are often pressured to conform to traditions and social stereotypes. They enjoy less autonomy over their bodies, and often lack an environment that helps them develop sports skills. By contrast their male counterparts enjoy new privileges as they grow up that are reserved for men, including autonomy, mobility and power. Globally, only one in five parliamentarians is a woman; one in three women worldwide experiences violence against her, and without change in the present rate of progress, it will take another eight decades for women to achieve equality in work.

But change is coming from all directions, with international movements like UN Women’s “HeForShe” where men take the initiative to stop discrimination and reshape expectations, with the building of “Equal Pay’ campaign, and local programmes like ‘One Win Leads to Another’ in Brazil, where under-privileged girls in Rio de Janeiro will develop leadership skills through sport, improving their ability to influence decisions that impact their lives at all levels.

As we walked through Rio’s cheering crowds, we witnessed how sport unites people from all walks of life with the power to rise above differences of sex, race, religion and nationality. We dared to hope that this flame will spread, and that the determination to achieve gender equality will transcend all obstacles.

Related News
06/08/2016
“We are carrying the torch for women and girls all over the world” – Executive Director
06/04/2020
She persists: Sport is a tool for empowering girls in Brazil
08/10/2018
Sport paves the way for skills and jobs for young mothers in Brazil
09/11/2017
From where I stand: “It is important to show women athletes can be anywhere and can do anything”
23/08/2016
“People are beginning to see our potential…the potential of all the girls who play sport”
END_OF_DOCUMENT_TOKEN_TO_BE_REPLACED