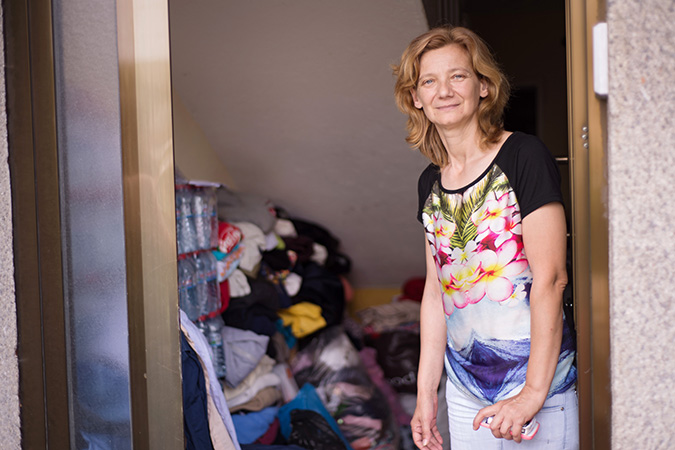 It took me only two days to realize who they were and why they were passing by my house by the railway track.I started making tea, boiling eggs and buying fruits to give them. But more refugees started coming—some days I would welcome 300 – 400 of them—so I started making bread. It was physically hard, until my husband bought me a dough mixer.

I used to sit in my garden waiting for them. Sometimes I would go to bed at 9 p.m., sleep until midnight and then sit outside waiting again.

Ferdi from Syria passed through last year. He was over 6 feet tall. When I saw him on the tracks, he was wearing plastic slippers of size seven, much smaller than his feet. I dressed his wounds and made him coffee.

Ferdi had left his wife and two children in Turkey, hoping to reach Holland and then bring them over. When he reached Holland, we stayed in touch. If he didn’t hear from us for a few days, he would get depressed.

In April, we paid for the tickets for his wife and children to join him in Holland. When we told him, he couldn’t believe it. He said, ‘If she comes, I will marry her a second time and you will be my godmother.’

My life has become simpler since the crisis. I don`t worry about the little things I used to…like, what detergent to buy …I have seen what it means for people to have nothing. I have seen children walking on stones, hungry. The entire perspective shifts.”

Lenche Zdravkin is a legend in the former Yugoslav Republic of Macedonia for her work with the refugees. Her home in Veles is located just across the railway track, which thousands of refugees traversed at the beginning of the crisis, trying to reach a safe haven in Europe. Ms. Zdravkin helps refugees and migrants when they stop at her house by the railroad, providing food, water, clothes and other necessities. She also visits refugees in the transit centres of Tabanovce and Vinojug, where UN Women offers support to women and girls through its local partners. She collects and offers donations to support the refugees. Her work is directly linked to SDG 16, on promoting peaceful and inclusive societies for sustainable development. It also contributes to the target on facilitating safe migration of people under SDG 10.

Related News
16/05/2016
From Where I Stand: Sonja Dimitrijoska
13/01/2016
UN Women assesses the needs of women migrants and refugees in Serbia and fYR Macedonia
22/09/2022
In Focus: War in Ukraine is a crisis for women and girls
22/09/2022
Press release: New UN policy paper shows the devastating impacts of the Ukraine war on women and girls
20/09/2022
Press release: New Platform of Women Leaders meets at UN General Assembly
END_OF_DOCUMENT_TOKEN_TO_BE_REPLACED