From Where I Stand: Sonja Dimitrijoska 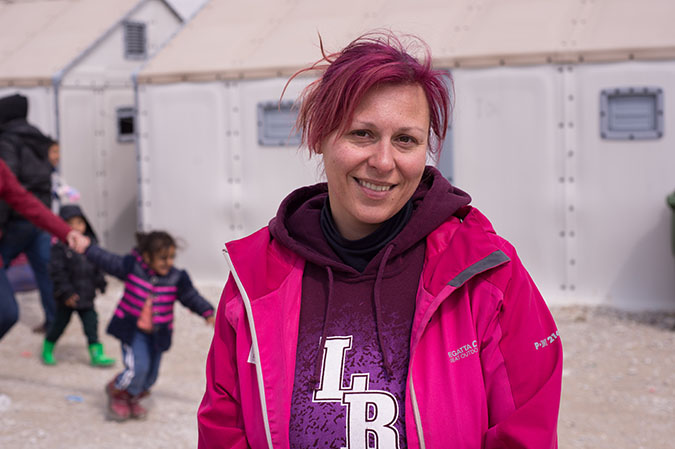 Although the job can be very stressful and intense, I love what I am doing. I started working as a humanitarian worker at the refugee transit centre in Tabanovce* [former Yugoslav Republic of Macedonia] in October 2015. Trains arrived every two to three hours and we had around 10,000 people arriving and leaving per day. I had to give directions to these people, assist in their medical needs or social care. The biggest challenge initially was to quickly prioritize and coordinate [responses to] refugees’ needs. We were only two people per shift. Later it increased to seven or eight people.

There is nothing harder than watching someone suffer when your abilities to help them are limited in every aspect. Even the work you do feels so little and you feel that much, much more can be done. I’ve found ways to deal with the stress, such as breathing exercises, music, painting and writing.

Being a psychologist, my primary role is to provide psychosocial care for women refugees. Women mainly approach me to request assistance with stress from travelling and there were some cases of violence survivors. I’ve found that non-verbal communication is universal and comprehensible in all languages. Sometimes I can understand them even though I don’t speak their language. I’ve learned that as long as there is empathy and truth, people could open themselves up to each other.

We now provide other services such as English, Arabic and Farsi language classes for the children. I like helping other people. I would love to continue what I’m doing in the future.”

Sonja Dimitrijoska, 39, from the former Yugoslav Republic of Macedonia, is a humanitarian aid worker with the NGO La Strada, a partner organization of UN Women and Oxfam in their joint work to provide support to women and girl refugees in transit centres in the Western Balkans. This work is related to the Sustainable Development Goals, including SDG 10 on reducing inequalities, which seeks to facilitate orderly, safe, regular and responsible migration and mobility of people; and SDG 16, which aims to promote peaceful and inclusive societies for sustainable development.

*The Tabanovce refugee transit centre in the northern city of Kumanovo, former Yugoslav Republic of Macedonia, is close to the Serbian border. Refugees arriving here from the Syria-Turkey-Greece route aim to cross into Serbia to access northern Europe.

Related News
21/01/2019
In the words of Nur Omar: “I’ve healed the wounds of war and feel more confident about my future”
13/01/2016
UN Women assesses the needs of women migrants and refugees in Serbia and fYR Macedonia
22/09/2022
In Focus: War in Ukraine is a crisis for women and girls
11/04/2022
Speech: Women’s involvement is both a right and an opportunity for better outcomes
08/03/2022
Women refugees from Ukraine bear war trauma and pain of separation
END_OF_DOCUMENT_TOKEN_TO_BE_REPLACED