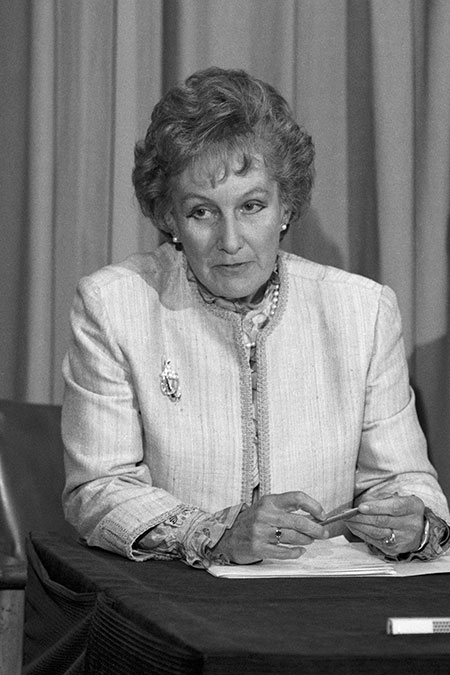 Margaret J. Anstee briefs the press at United Nations Headquarters on 27 May 1992 during her tenure as Special Representative of Secretary-General Boutros Boutros-Ghali for Angola. Photo: UN Photo/Michos Tzovaras.

We honour the life and achievements of an inspiring role model, Dame Margaret Anstee, a British citizen and long-serving UN staff member who died on 25 August 2016 at the age of 90. The preamble of the United Nations Charter announces the commitment...to...“reaffirm the faith in the fundamental dignity and worth of the human person….”  Dame Margaret Anstee lived those principles to the full.

Her career tested barriers for women at every step. She was the first woman to be posted to South America, where she drove through the Andes mountains in her Volkswagen Beetle; she headed up the first UK Government “think tank” under Prime Minister Harold Wilson and worked as his senior economic adviser; and she was the first woman to break the career boundaries at the United Nations, where she worked for more than four decades (1952-93), heading economic and social development missions in all the developing regions of the world, primarily with UNDP.

In 1987 she became the first female Under-Secretary-General as Director-General of the UN Office in Vienna (1987-92), appointed by the-then Secretary-General Javier Pérez de Cuéllar. Subsequently, from 1992-1993, she served as the Secretary-General’s Special Representative to Angola, the first woman to head a UN peacekeeping mission including a military component, as well as disaster relief operations. She was a true pathfinder in senior international posts that were previously closed to women.

Described by former Secretary-General Kofi Annan as “a true pioneer of the international community”, she served both at the UN’s New York Headquarters and in some of the poorest countries of the world attempting to help the victims of war, poverty and natural disasters. She worked tirelessly to overcome the inequalities between the developed and developing world, a battle that she said she considered essential for the survival of all.

A prolific author, she published several books on Bolivia and Angola, as well as her autobiography, “Never Learn to Type”, and a biography of Professor J.B. Trend, the first Professor of Spanish at Cambridge, who greatly influenced her life during her time at the University, from which she graduated with a first-class degree in Modern Languages. “Never learn to type” was, she wrote, “a dictum I invented for myself and stuck to throughout my career. …Many of my peers had to take secretarial courses and became high-powered assistants to men often not as bright or as qualified as themselves. I decided very early on that I would never learn to type, in order to avoid a similar fate”.