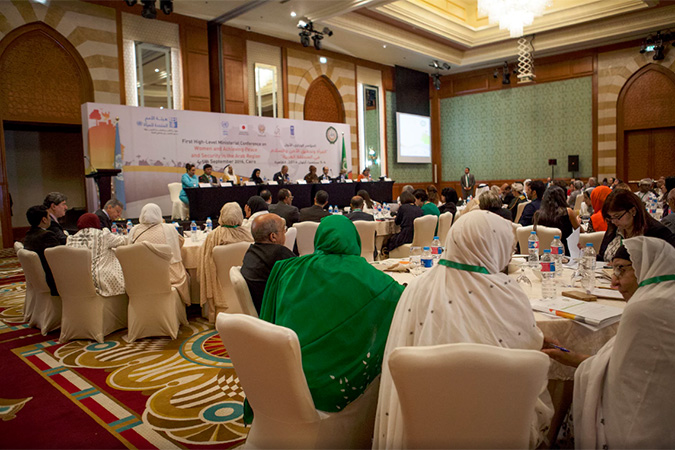 The opening of the first ministerial conference on “Women and Achieving Peace and Security”. Photo: UN Women/ Yara Saed.

The League of Arab States and UN Women concluded the first ministerial conference on “Women and Achieving Peace and Security in the Arab Region” on Monday, 5 September. The two-day conference was organized to facilitate the implementation of the regional strategy and plan for UN Security Council resolution 1325, which first recognized women’s disproportionate suffering in times of conflict and called for their engagement in peace and security processes and prioritizing them in humanitarian assistance.

The conference was attended by Arab ministers concerned with women’s affairs, representatives of 18 Arab countries and the Secretary-General of the League of Arab States Ahmed Abou el-Gheit, as well as representatives from UN Women and Zainab Bangura, Special Representative of the UN Secretary-General for Sexual Violence in Conflict. Participants also included the Ambassador of Japan in Egypt Takahiro Karagwa and regional and international organizations including the Arab Women’s Organization, the UN Economic and Social Commission for West Asia (ESCWA), the UN Development Programme (UNDP) and Karama, in addition to a number of influential public and media figures.

“The conference builds on years of joint work with partners. The region can no longer afford any delay in reaching the representation [that] women deserve in decision-making circles and in prioritizing women in humanitarian assistance. We stress the commitment of the League of Arab States to achieve the goals of the regional women, peace and security agenda through close work with Member States and by providing technical assistance and dialogue platforms to exchange expertise,” said Inas Mekkawy, Director of Women, Family and Childhood Department at the League of Arab States.

A large body of evidence compiled over the past few decades indicate that engaging women in peace and security processes and humanitarian assistance benefits not only for women, but entire communities. The Global Study of Resolution 1325 completed last year shows that women’s engagement in peace processes increases the chances of peace agreements lasting for 15 years by 35 per cent. Evidence also shows that prioritizing women in humanitarian assistance contributes to more diversity in families’ diets and, in some cases, decreases the prevalence of hunger by up to 37 per cent.

“We have a lot of experience through our regional office in working with women peacemakers in Libya, Syria, Yemen and Iraq. We have broken ground in the beginning of this year with the formation of the first-of-a-kind Women’s Advisory Board to the UN Special Envoy for Syria to represent the voices of Syrian women during the formal negotiations process. From this experience, we know for a fact that increasing women’s representation in such circles is not only their unnegotiable right, but also an added value of great importance at this critical stage of the region’s history,” said Director of UN Women’s Programme Division Maria-Noel Vaeza.

The conference concluded with a number of resolutions including the allocation of financial resources and technical assistance to develop National Action Plans (NAPs) to execute UN Security Council resolution 1325 in alignment with the regional strategy and executive plan on “Women and Achieving Peace and Security in the Arab Region”. Resolutions also included developing financing and monitoring mechanisms to enhance accountability and to ensure serious commitment to the goals of the women, peace and security agenda, as well as ensuring an at least 30 per cent representation of women in legislative bodies, decision-making circles and negotiation teams.

Conference resolutions tackled the broader context of the challenges facing women in the region, especially in conflict areas in Syria, Iraq, Yemen, Libya and Palestine. The closing statement urged international organizations and donors to push for better reporting mechanisms for sexual violence, better access to services and medical and psychological care for women survivors of sexual violence, and better living conditions and access to basic services for women refugees in the region. The resolutions also gave special attention to the condition of Palestinian women.

See highlights of the conference:

Ministerial Conference on "Women and Achieving Peace and Security in the Arab Region" by UN Women's Regional Office for Arab States on Exposure
Related News
27/07/2016
Empowering women key to preventing extremism in Jordan
13/01/2014
Syrian Women’s Joint Statement on Engagement in the Syrian Political Process
21/10/2020
From where I stand: “I’m a changemaker and not afraid of standing up for what I believe in.”
21/09/2016
From where I stand: Monira Hwaijeh
08/01/2016
iKNOW Politics launches e-discussion on women, peace and security in the Arab region
END_OF_DOCUMENT_TOKEN_TO_BE_REPLACED