Remarks by Under-Secretary-General of the United Nations and Executive Director of UN Women, Phumzile Mlambo-Ngcuka, at the High-Level Panel report presentation to Secretary-General Ban Ki-moon during the 71st session of the UN General Assembly 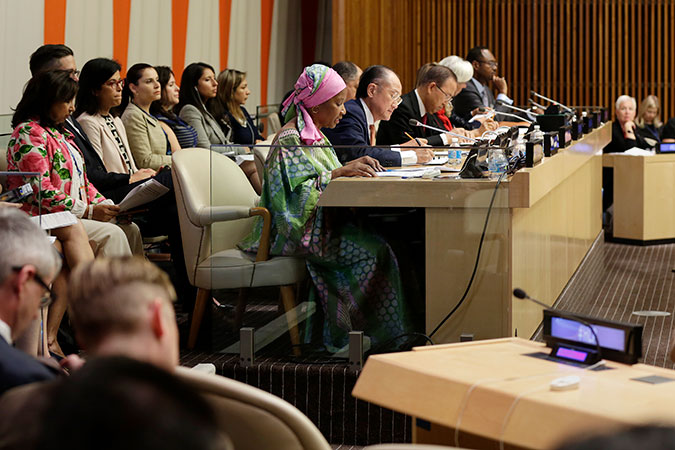 Secretary-General, we are nostalgic that this is your last UN General Assembly with us, so this is our tribute to you.

On behalf of UN Women and all supporters of women’s rights, I would like to express my deepest gratitude to you, Mr. Secretary-General, for your inspiring leadership in breaking barriers and promoting women’s rights and gender equality so actively during your tenure.

You set a goal of having no country without women’s political representation. We are nearly there: just two countries remain, in the Pacific Islands, where governments remain “men-only”—but I think a Fijian President of the General Assembly may be able to sort that out.

I would also like to acknowledge the unwavering support of Mrs. Ban to UN Women and the women’s agenda, especially to ending violence against women, and for peace.

We thank you for paying attention to women’s economic empowerment—a fundamental issue for the achievement of the Sustainable Development Goals.

You convened the High-Level Panel on Women’s Economic Empowerment. The Panel brings together the key actors—governments, civil society, business, trade unions, academia, international organizations—who have all committed to mobilize their sectors to push this agenda forward.

I thank all panelists for their time and energy, and especially the co-chairs for their leadership, and the researchers and the authors for their work.

At the centre of the first report issued today are the lives of women who have been left behind: poor women, women working in the informal sector, domestic workers, and women caring for their families and households without recognition or remuneration.

The report calls for the changes needed in the structures and systems, including in the global economy, to provide them with equal opportunities.  It calls for simple, doable steps with high impact, such as the elimination of discriminatory legislation or the ratification of ILO convention 189 on domestic workers. And it calls for a sense of urgency in realizing this agenda.

In the coming six months, the panel will complete its work and work toward producing a final report which will ensure that there is an enduring legacy of addressing the issue of economic empowerment in a manner that reaches women at the bottom of the pyramid. UN Women is committed to taking the work forward when the panel makes its final report.

I would like to now introduce His Excellency Luis Guillermo Solis, President of Costa Rica and co-chair of the Panel, to present to you the Panel’s Call to Action.