The economic costs of violence against women

Remarks by UN Assistant Secretary-General and Deputy Executive Director of UN Women, Lakshmi Puri at the high-level discussion on the “Economic Cost of Violence against Women” 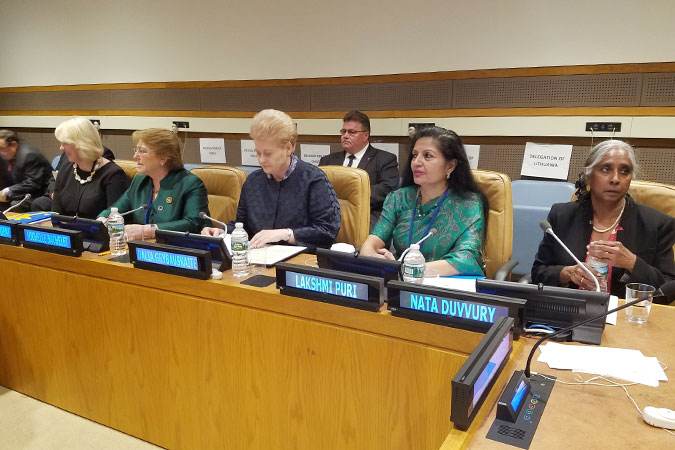 Thank you for this very timely discussion as we celebrate the first anniversary of the adoption of the 2030 Agenda which commits to “eliminate all forms of violence against all women and girls in the public and private spheres, including trafficking and sexual and other types of exploitation” as one of its sustainable development Goals.

Thank you, H.E. Ms. Dalia Grybauskaitė, President of the Republic of Lithuania, and H.E. Ms. Michelle Bachelet Jeria, President of the Republic of Chile, for hosting the event and for their leadership and personal commitment to end the cycle of violence that diminishes us all and to ensure that the international community lives up to our ideals of equal rights of men and women, of human rights and human dignity for all.

Violence against women and girls (VAWG) is one of the most pervasive human rights violations occurring in the world. It happens in every country, not only in situations of conflict or crisis, but in contexts others call peaceful, and in both public and private spaces.

Figures around the world demonstrate the gravity of this scourge.

As the international community is called to make bold front-loading efforts to ensure that women and girls can live free of fear and intimidation by 2030 latest, it is important to emphasize that violence against women is an extreme violation of the human rights of women and girls, but also, it generates huge economic costs for women and families, as well as for communities and societies.

In 2013, the 57th session of the Commission on the Status of Women (CSW57) noted the economic and social harm caused by such violence (para 11.) and urged all governments to carry out continued multidisciplinary research and analysis on the structural and underlying causes of,  cost and risk factors for, violence against women and girls and its types and prevalence, in order to inform the development and revision of laws and their implementation, policies and strategies, and make such information public to support awareness-raising efforts.

The Commission went on to urge governments to collect, collate, analyze and disseminate reliable, comparable and anonymized data and statistics on a regular basis, disaggregated by sex and age at the national and local levels on different forms of discrimination and violence against women and girls, its causes and consequences, including the health costs and economic costs to society of such discrimination and violence, and also consider all other relevant factors, such as accessibility, to inform the formulation, monitoring and evaluation of laws, policies and programmes (Para 34). Some of the true costs associated with violence against women and girls are highlighted in the results of national studies and other research outlined below.

Studies indicate, for example, that in India women can lose an average of at least five paid work days for each incident of intimate partner violence. This fact would mean the affected woman would get 25 per cent less of her salary each time an incident of violence happens.

In Uganda, about nine per cent of violent incidents forced women to lose time from paid work, amounting to approximately 11 days a year, equivalent to half a month’s salary, affecting not only the incumbent person but her family and dependents.

Also, research shows for example that women who are exposed to intimate partner violence are employed in higher numbers in casual and part-time work, and their earnings are 60 per cent lower, compared to women who do not experience such violence.

Annual costs of intimate partner violence were calculated at $5.8 billion in the United States of America and $1.16 billion in Canada. In Australia, violence against women and children costs an estimated $11.38 billion per year. Domestic violence alone costs approximately $32.9 billion in England and Wales.

Research indicates that the cost of violence against women could amount to around 2 per cent of the global gross domestic product (GDP). This is equivalent to 1.5 trillion, approximately, the size of the economy of Canada.

The direct cost of the health system, counselling and other related services, the justice system, child and welfare support, as well as indirect costs, such as lost wages, productivity and potential, are just a part of what societies pay for violence against women.

Violence against women and girls brings huge economic costs to any society. The negative impact on women’s participation in education, employment and civic life undermines poverty reduction. It results in lost employment and productivity, and it drains resources from social services, the justice system, health-care agencies and employers.

As such, violence against women is a clear barrier to sustainable development. This has been acknowledged in the recently adopted Agenda 2030 for Sustainable Development. For the first time, violence against women and girls is included as a target area under Goal 5 on gender equality, reaffirming that such violence is a barrier to gender equality, women’s empowerment and overall sustainable development, as well as to the achievement of the other Goals.

UN Women is working with partners to demonstrate the wide-reaching implications, including economic, of such violence on society.

Women’s testimonies of abuse, a gradual recognition of the costs we all bear, and the development of good practice have informed our ground breaking global work on coordinated, inter-agency approaches both to the prevention of abuse and collaborative service provision.  Knowing the costs of violence is remarkably powerful for understanding and for advocacy action to support women, to prevent abuse and to punish perpetrators.

It is also important to highlight that the analysis of the cost of violence shows that much of the response to violence against women and girls to date has focused primarily on intervening with affected women after the violence has occurred. Such strategies are essential to mitigate the devastating effects for survivors, but they cannot prevent violence from occurring in the first place.

There is therefore also a need to implement programmes that prevent such violence from occurring in the first place. In doing so, we can prevent significant human rights violations and hold the promise of reducing the social and economic costs of violence.

If society would effectively eliminate violence against women, the equivalent costs could be dedicated to development purposes. Those resources could greatly contribute to close the resource gap and enhance our efforts to achieve gender equality and the empowerment of all women and girls, and the sustainable development goals at large.