At a high-level event on 21 September, during the 71st session of the United Nations General Assembly, UN Women launched a new public-private partnership to support its flagship programme initiative, “Making Every Woman and Girl Count”.

The five-year programme will invest much-needed resources and expertise, focusing on 12 pathfinder countries, to generate, prioritize and use gender data. It will assist countries in making evidence-based and targeted policies to fully implement and track progress on the Sustainable Development Goals (SDGs). 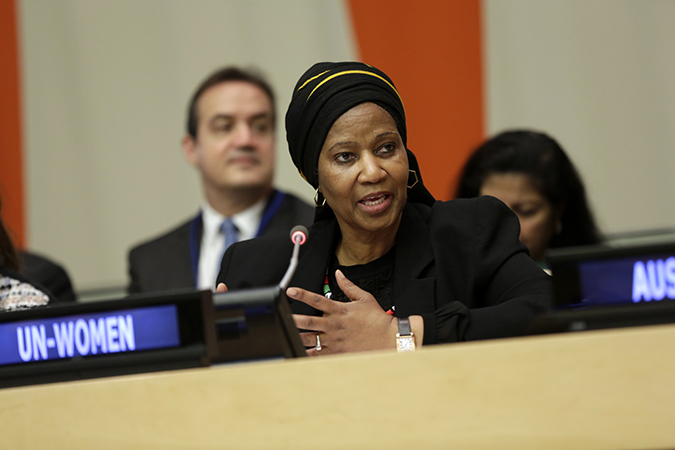 In her remarks at the event, UN Women Executive Director Phumzile Mlambo-Ngcuka stressed, “Without gender data, there is no credible path to achieving the SDGs. Right now, we have do not have data to monitor 80 per cent of the indicators for SDG 5, on gender equality.”

Today, we have adequate information for less than one quarter of the key performance indicators to monitor the gender-specific elements of the Sustainable Development Goals, largely due to the failure to prioritize gender equality in data collection. For example, “only 13 per cent of countries dedicate a regular budget for gender statistics. Out of US$131 million committed to statistical capacity-building by the OECD-DAC, only 2 per cent is devoted to projects that specifically address gender equality,” added Ms. Mlambo-Ngcuka. 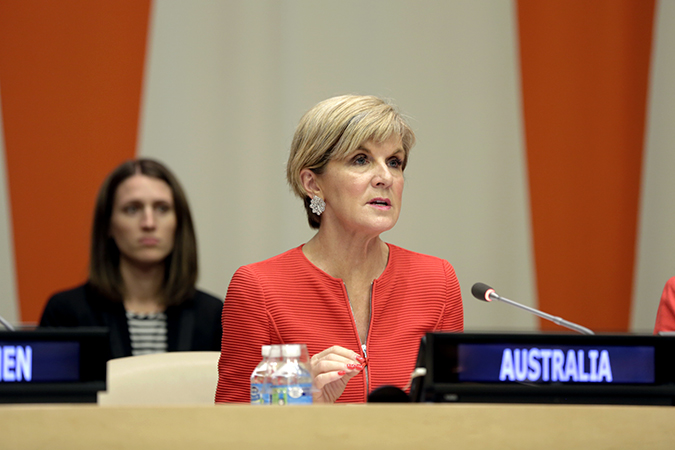 “Gender equality is utterly essential to sustainable growth and development. To track progress, we need data…and gender-related data is simply not available and there is not enough agreement on data collection methodologies,” said Australian Minister for Foreign Affairs, Julie Bishop. Australia has announced its support to the UN Women flagship programme with $6.5 million in funding. A key priority for Australia is to improve data collection at the individual level, instead of relying on household level surveys that are mostly used in countries.

Melinda Gates, co-Chair of the Bill and Melinda Gates Foundation, believes that we cannot close the gender gap without closing the gender data gap. “Gender data is foundational to all this work. We can’t make good decisions without good data,” she said. When asked about a top priority, Ms. Gates said, “I would collect data on women’s unpaid care work”.

“If we don’t collect the data on unpaid #carework women do, we won’t recognize that hidden inequality”- @melindagates #genderdata #UNGA pic.twitter.com/EXyY20BjNH

Mr. Wade Warren, Assistant to the Administrator of USAID for the Bureau for Policy, Planning and Learning, noted, “Unless we join efforts, we will not have data that is comparable across all countries.” USAID has led demographic health surveys in more than 90 countries, but recognizes the need for data in other areas. Mr. Wade also announced a commitment of $5 million to UN Women’s “Making Every Woman and Girl” initiative.

“Let’s keep #genderdata in the spotlight and on this stage, so that we keep our promises to women and girls” - @emilycpryor @Data2X #UNGA pic.twitter.com/4iQuUouoJc

The event was attended by Heads of State and Governments, Ministers and a host of high-level dignitaries. Mr. Yoweri K. Museveni, President of Uganda, highlighted the challenges that the country faces and policies that have made a difference to women and girls. “We have introduced universal education so that girls can go to school. In a traditional society, it is the girl who goes to collect water. That burden is reduced when you bring water to the village,” he said. 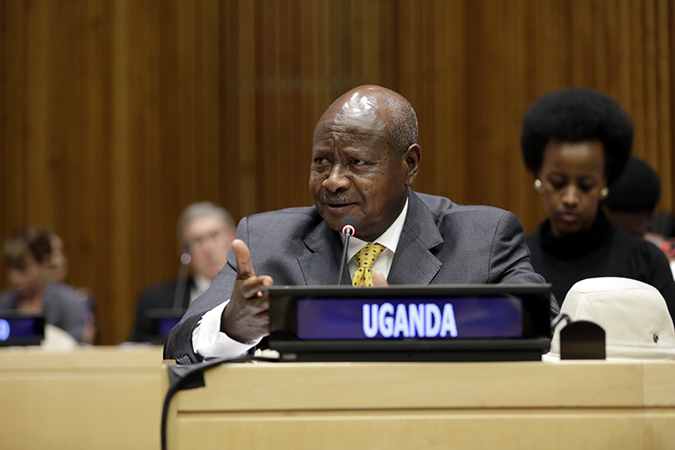 Yoweri K. Museveni, President of Uganda speaks at the launch of the "Making Every Woman and Girl Count" initiative. Photo: UN Women/Ryan Brown

Mrs. Sheikh Hasina, Prime Minister of Bangladesh, also a Planet 50-50 Champion, added her voice in support of UN Women’s initiative. “A sound database can help us understand that gaps and the gains in our efforts,” she said. Bangladesh is known for its practice of presenting a gender budget to the Parliament every year, along with a national budget. 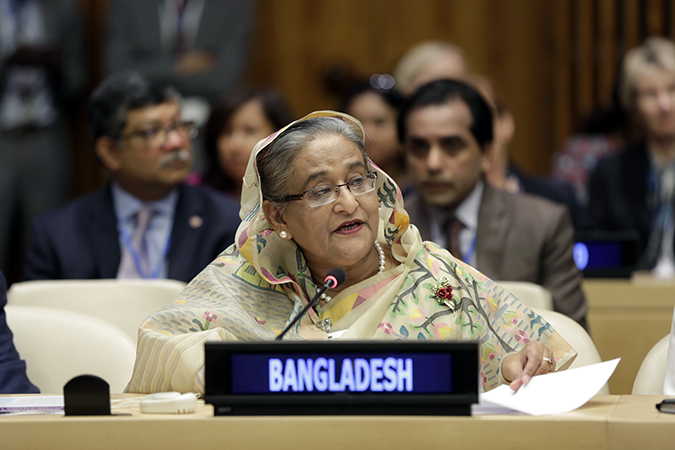 Sheikh Hasina, Prime Minister of Bangladesh speaks at the launch of the "Making Every Woman and Girl Count" initiative. Photo: UN Women/Ryan Brown

The President of Senegal, Mr. Macky Sall, noted, “There has been an openness for women in various sectors” where women traditionally didn’t participate before. Seizing the opportunity and recognizing the potential of women’s empowerment, Senegal has enacted several policies to support gender parity, supports increasing women’s share in the agriculture and has invested in girls’ education and women’s health.

“Poverty is sexist. Government social policies have to support the most vulnerable.”- @macky_sall, President of Senegal #genderdata #UNGA pic.twitter.com/04u2K92ZgC

Complementary and collaborative efforts are a key element of the flagship programme initiative. Speaking at the event, Ms. Claudia Ruiz Massieu, Secretary of Foreign Affairs of Mexico, announced: “Mexico will establish a Global Centre of Excellence in Gender Statistics, to research and produce quality gender data…It will enhance south-south cooperation and allow us to better follow up on the implementation of the SDGS”. 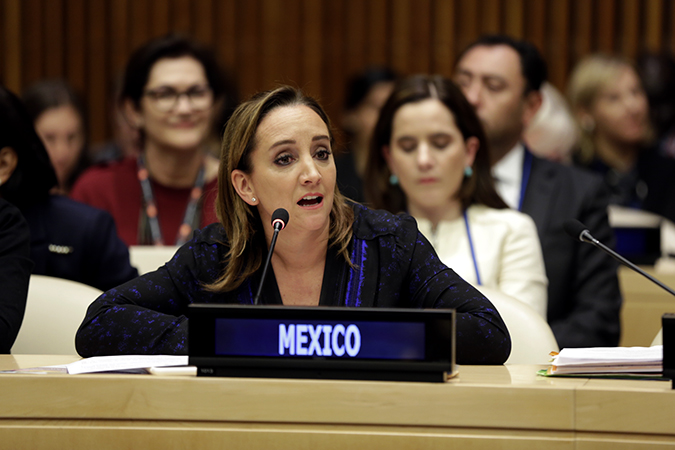 Claudia Ruiz Massieu, Secretary of Foreign Affairs of Mexico speaks at the launch of the "Making Every Woman and Girl Count" initiative. Photo: UN Women/Ryan Brown

Highlighting another important component of the programme, which seeks to ensure that gender data is used by policy-makers and is available to citizens, Ms. Anne-Birgitte Albrectsen, CEO of Plan International, an organization that works to improve the lives of girls around the world, said, “Data in the hands of the girls is what we need, so that they can hold their community leaders and governments accountable to the promises they’ve made.” 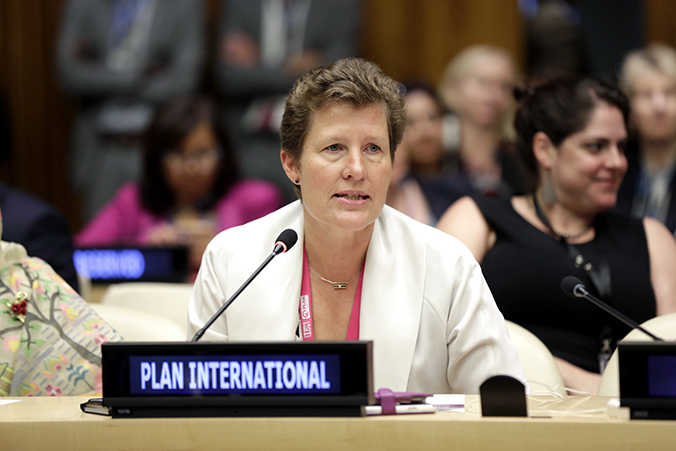 Anne-Birgitte Albrectsen, CEO of Plan International speaks at the launch of the "Making Every Woman and Girl Count" initiative. Photo: UN Women/Ryan Brown

UN Women urges donor countries, governments and other development actors to join this critical effort to make policies count for women and girls. For an in-depth look at the programme, read the interview with UN Women’s Chief Statistician, Papa Seck.

Watch an archived webcast of the event: