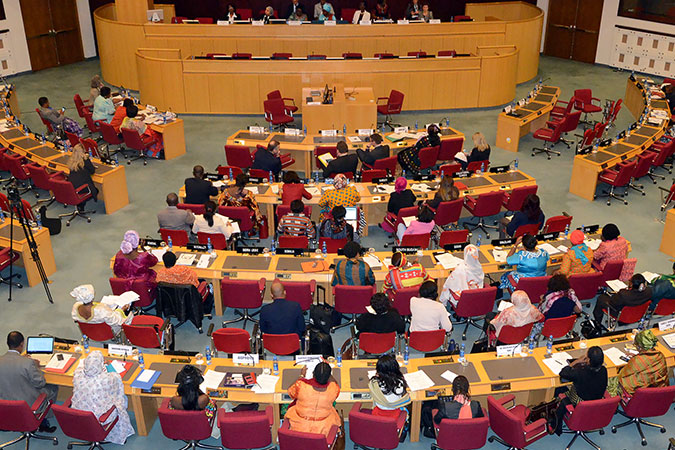 Participants at the opening ceremony of the Africa Ministerial Pre-Consultative Meeting to prepare for CSW 61.Photo: UN Women/Martha Wanjala

The Africa Ministerial Pre-Consultative Meeting convened in Addis Ababa to prepare for the upcoming 61st session of the UN Commission on the Status of Women (CSW61) concluded successfully with a unified Africa position, “One Africa One Voice”. Held from 26 – 27 January, the meeting gathered 235 participants, including 46 Member States represented by Ministers of Gender and Women’s Affairs, senior government officials and Ambassadors to the African Union (AU) at the United Nations Economic Commission for Africa (UNECA) Headquarters in Ethiopia. Also present were senior officials from the African Union Commission (AUC), the United Nations system, development partners and representatives of civil society organizations, including youth and young women’s organizations.

The meeting served as a platform to develop key messages and strategies that would shape Africa’s position and advocacy for the outcome negotiations at CSW 61, to be held in New York from 13 – 24 March, focusing on the theme of “Women’s Economic Empowerment in the Changing World of Work”.

In her opening remarks, the UN Women Executive Director, Phumzile Mlambo-Ngcuka, ephasized that as the largest regional block within the United Nations, “Africa has the potential to influence key decisions in the United Nations, including outcomes of the Commission on the Status of Women and other intergovernmental processes.” 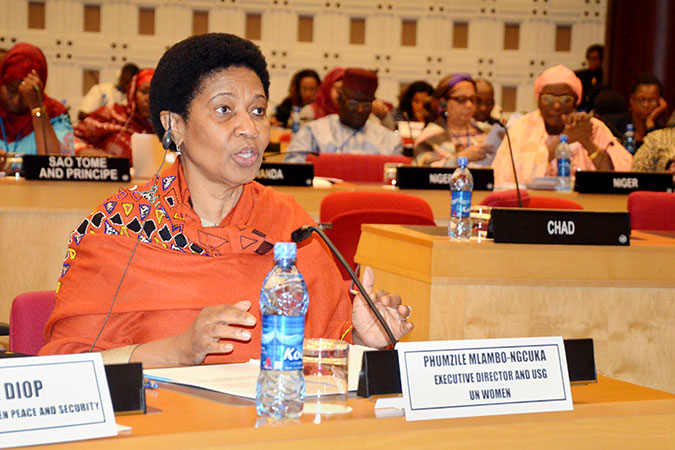 During the meeting, participants recognized the importance of addressing women’s rights to decent work and full and productive employment, and reaffirmed that realizing women’s economic empowerment requires transformative and structural changes. Member States engaged key stakeholders, including the private sector, youth, faith-based organizations, civil society and development partners, in discussions on how to support governments to ensure women’s economic empowerment in the changing world of work, marked by innovations, technology and data revolution. Also highlighted throughout the meeting was the diverse contexts of African countries and that the countries in conflict, post-conflict and fragile contexts have unique and specific needs.

In the closing session, the Chairperson of the African Union Commission at the time, Nkosazana Dlamini-Zuma, appealed to the participants to continue to ensure that the women’s rights agenda is not reversed, stressing that gender equality and women’s empowerment must be ensured for future generations. Appealing to the youth, she called on them to acknowledge that their “horizons are much wider than ours” and that they could “go further…and [have] what it takes to reach beyond the skies”.

The two-day meeting built consensus that the focus should be on: strengthening investments in the demographic dividend of African women and youth, particularly young women; implementing gender-responsive macro-economic policies; strengthening accountability mechanisms for women’s economic empowerment; and ensuring women’s full, equal and effective participation and leadership at all levels of decision-making concerning economic and social policies. The discussions also highlighted women’s leadership in peace, security and humanitarian action; achieving safe and informed mobility for women locally, nationally, regionally and internationally; enhancing social protection policies, infrastructure and public services for women; ensuring women’s full access to and control over productive resources, services and markets; and eliminating discriminatory laws, regulations, practices and stereotypes that hinder the protection and progress of women in the world of work.

As the meeting concluded, UN Women Executive Director Ms. Mlambo-Ngcuka urged Member States to build on the momentum gained during the meeting as they head into CSW61 negotiations. She also proposed a systematic evaluation in 2020 to measure progress in key areas, such as equal pay for equal value of work, the level and quality of participation of women in all decision-making bodies, the participation of young people, the adaption of policies that better address the abnormalities in the informal sector and on discriminatory laws.