In the words of Hikmah Bafagih: “Our vision is to create an inclusive Islam, having people oppose me is very common”

University professor, community organizer, peace-builder, Counsellor, mother, wife, Hikmah Bafagih from Malang in East Java, Indonesia, has many roles. She is also a religious leader, steering the women’s wing in her region of Nahdlatul Ulama (commonly known as NU), a traditionalist Sunni Islam movement which is considered to be the biggest Muslim organization in Indonesia. She guided community discussions at the massive gathering in Pesantren Annuqqayah—one of the oldest Islamic boarding schools in the country—on how women contribute to peace in their communities. The discussions were in the lead up to the International Peace Day commemoration in Madura island, East Java, with the President of Indonesia, co-hosted by UN Women and Wahid Foundation as part of the UN Women’s new regional programme on preventing violent extremism in Asia. It is funded by the Government of Japan, and being implemented this year in Bangladesh and Indonesia. 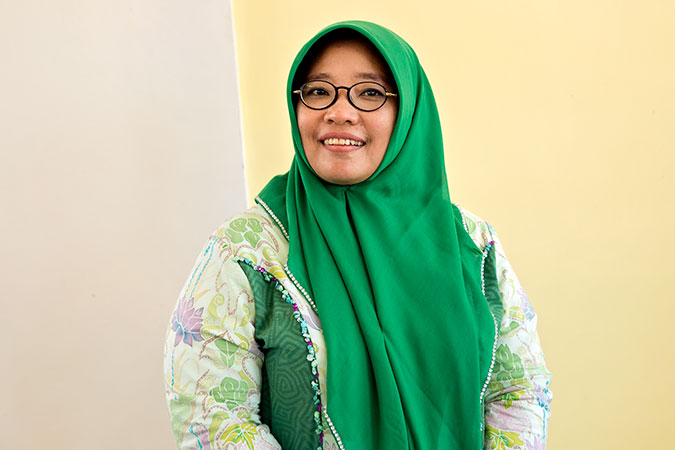 I am a Lecturer in the State Islamic University in Malang, a mother of four children, and I am also head of the Fatayat (women’s wing) of NU. We do a lot of programmes to prevent radicalization and intolerance. We try to develop preachers who can advocate for anti-radicalism in all districts of East Java. We handle the people from our region who were deported due to being affiliated with ISIS or ISIL. Our vision is to create an inclusive Islam. As a Counsellor at the Centre for Women and Child Protection, I also handle cases of violence against women and children.

Yes, I do face a lot of opposition, as we take on various cases. This year, I handled cases of some male Islamic leaders who impregnated their students, and cases of a priest who molested some kids in Sunday school. When we tried to bring them to justice, people thought we were dishonoring those religious leaders. Well, once they committed the crime, for us they become people who should no longer be respected as religious leaders. 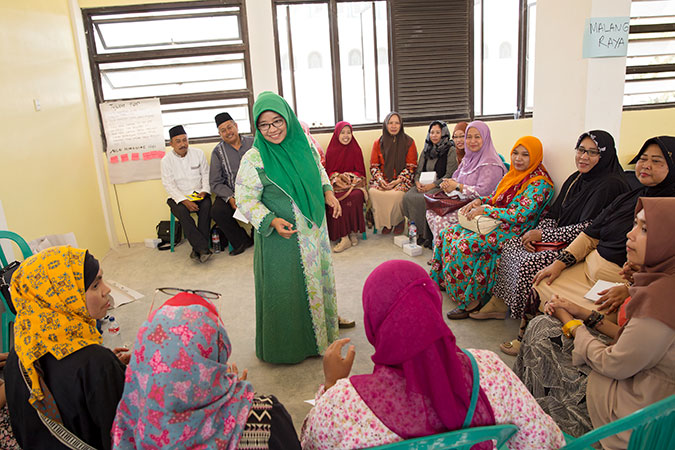 In early October, on the eve of the International Peace Day commemoration in Madura island, East Java, Hikmah Bafagih guides the focus group discussions, in her effervescent style, asking the participants from her hometown of Malang to highlight how women and girls contribute to peace in their communities. Photo: UN Women/Ryan Brown

We face opposition because we also work with LGBT and transgender people. I am known as the mother of the gays and the transgender. They don’t have identity cards, and face problem getting health insurance and treatment at local clinics.

So, having people oppose me is very common, I’m used to it. I am used to people having ill thoughts about me, people thinking I am weird. I appear different to them because I also make friends with those who are HIV positive, women who are the wives of drug users, and these women suffer from a lot of domestic violence. Sometimes their husbands deliberately make their wives junkies so that it’s easier for them to get the IV drugs. We have 250 families of drug addicts, and we are thinking of how the women of these families can come together and empower themselves. 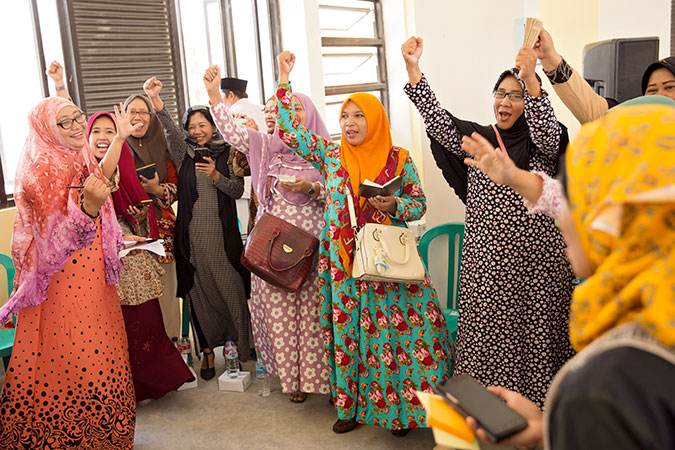 Through joyful singing and chanting, the women tell how they will rally and mobilize to bring women into the centre of community peacebuilding efforts. The discussions took place at the Pesantren Annuqqayah—one of the oldest Islamic boarding schools in Indonesia, founded in 1887. This was also the venue for the International Peace Day commemoration in Madura island, East Java, with the President of Indonesia. Photo: UN Women/Ryan Brown

On Sundays, I convert my house into a centre for skills training for women who were terminated from their work, and also for women whom we have assisted at the Centre for Women and Child protection. They gather in my house, they have their own cooperative unit. We also meet with different groups of people, such as—gay and transgender people and people living with HIV. My children are okay with this, and my husband is the most supportive, because this is what we think—if we help as many people as we can, us and our next generation will be helped, wherever they are.

A woman is a solidarity maker, so this is something that we must do. Women are discriminated, suffer from stigma; they suffer injustice because of improper religious interpretation, the patriarchal culture. This often disrupts their potential of building solidarity. What is most important is to empower women and to ensure they are not experiencing violence, so that women can return to being solidarity makers. 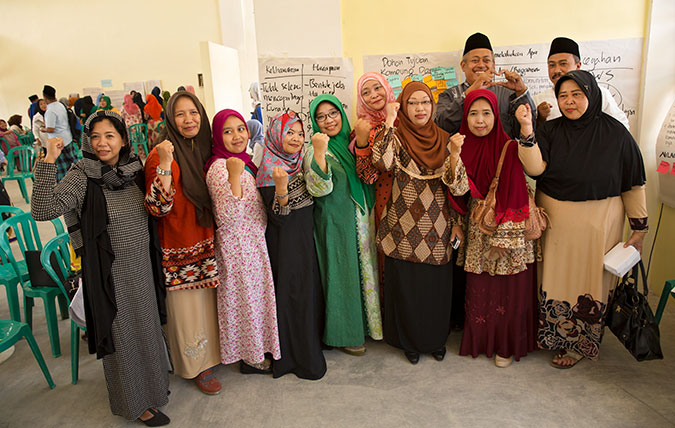 Closing the focus group discussion, the group from Malang with their facilitator Hikmah Bafagih prepare to present their ideas to the rest of the participants from other parts of the country. Here they consolidate their inputs on how they will serve as interlocutors on peace dialogue in their community.  Their presentation fed into the International Peace Day event the next day which was co-hosted by UN Women and Wahid Foundation as part of the UN Women’s new regional programme on preventing violent extremism in Asia, funded by the Government of Japan, and currently being implemented this year in Bangladesh and Indonesia.  Photo: UN Women/Ryan Brown

When I grow old, I want to have a house—a house with psychologists and psychiatrics, which can accommodate people who feel unwanted, for example children, victims of violence, babies born out of wedlock, poor people who suffer from diseases such as HIV, and transgender and gay people for whom others may not care…people who just wait until they die. That’s the dream, that one day we have a rehabilitation house.

But of course, we can’t just expect that to happen, we must do something today. ”