More women than men live in poverty, but the incidence of poverty differs by age, marital status, household composition and other factors. For the first time, UN Women and the World Bank have analyzed household survey data for 89 countries by sex, age, household composition and other relevant variables to better understand the profile of the poor. The findings aim to improve policy interventions to eradicate global poverty and meet the Sustainable Development Goals. 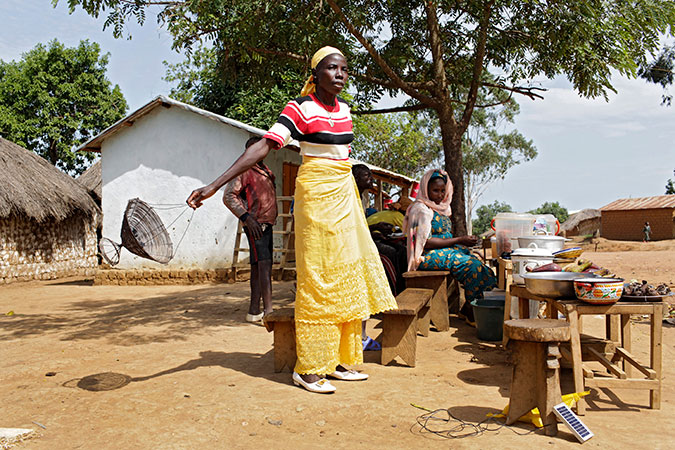 Rebecca received business training and a small grant from UN Women, and sells a variety of hot food, including meat stew and cassava dishes, at the main roundabout in the town of Ngam, Cameroon. Photo: UN Women/Ryan Brown

As of 2013, an estimated 767 million people lived below the international poverty line of $1.90 a day [1]. How many among them are women and girls is still unknown, although research in various countries has shown that women and girls fare worse than men and boys on a range of factors that may predispose them to poverty, including having their own source of income, ownership and control of assets and decision-making within their households. Until now there has been no credible global estimates of the number of people living in extreme poverty disaggregated by sex.

A collaborative effort by UN Women and the World Bank aims to address the gender gap in poverty analysis. On 18 October, during a special event of the Economic and Financial Committee of the UN General Assembly, the organizations jointly unveiled the initial results of a global study on gender differences in poverty. The joint effort uses the Global Micro Database (GMD), which is a collection of globally harmonized household survey data developed by the World Bank’s Poverty and Equity Global Practice, covering 89 countries and representing an estimated 84 percent of the population in the developing world.

The results, presented by Senior Economist of the World Bank, Kinnon Scott, show that between the age of 20 and 34 years, women are more likely to be poor than men. The difference coincides with the peak productive and reproductive ages of men and women, and can be related to factors such as having young children in the household and the higher likelihood for women to leave the labour market in response to rising demands on the time they allocate to unpaid care work. Divorce, separation and widowhood also affect women more negatively than men. Divorced women in the 18-49 age group are more than twice as likely to be poor than divorced men in that same age group.

The policy implications of the findings are clear—eradicating poverty will require greater attention to the vulnerabilities faced by women during specific periods of their lives.

“The greater likelihood of women not having an income of their own and the inequality in the division of unpaid care work, put women at a severe economic disadvantage compared to men, and at a higher risk of poverty,” says Shahra Razavi, Chief of Research and Data Section at UN Women. “Therefore, policy interventions to fight global poverty must pay attention to the specific barriers that women face”.

There is clearly a need for accessible, affordable and quality childcare services to enable both single parent families (predominantly single mothers), as well as other families with children, to combine their care responsibilities with income-generating work. “But it is also clear that many women with children will need social protection transfers to complement their earnings”, adds Ms. Razavi.

However, according to Magdalena Sepúlveda, former Special Rapporteur on Extreme Poverty and Human Rights, “success or failure of social protection systems in addressing women’s poverty rests heavily on whether they are designed and operated from a gender perspective.” This would mean taking into account the multiple forms of discrimination against women and girls when designing and implementing such programmes.

Giving the example of conditional cash transfer programmes which have proliferated in Latin America over the past two decades, and have decreased overall poverty, but increased feminized poverty, Sepúlveda explains: “The conditionalities attached to these programmes have in fact placed additional demands on women’s time, hindered their access to formal labour markets, limited their possibilities to participate in education and training...or further deprived them of scarce leisure time.” Moving forward governments should “reconsider the use of conditionalities with a view to eliminating their negative gender impact …promote the co-responsibility of men caring for children and ensure links of social protection programs with complementary public services including child care services”.

Women’s disproportionate burden of unpaid work was highlighted by other experts at the high-level event as a major contributor of their poverty, and also poorer health. “Women’s agricultural work remains mostly unrecognized across South Asia, by governments, data collectors, employers, families, and by women themselves,” said Haris Gazdar, from the Collective for Social Science Research, Karachi, Pakistan. As a result, he added: “Women workers are unpaid or underpaid, and the price is often paid in terms of women’s health, and the health and nutrition of their children. We found in a rural region of Pakistan that women who had worked in cotton harvesting were more likely to be undernourished, and their children were significantly more likely to be stunted, compared with women who did not do this work.” The challenge therefore is not merely to intensify women’s market work but to ensure that such work does not take place at the expense of women’s own well-being, and the nutrition and well-being of their children.

With reference to the agrarian economies of sub-Saharan Africa, Agnes Quisumbing from the International Food Policy Research Institute, underlined the importance of women’s individual land rights as a critical area of intervention, as they impact social and intra-household gender dynamics.

The findings of the research will feed into the first issue of UN Women’s new flagship report, Gender Equality in the 2030 Agenda for Sustainable Development, to be launched in February 2018. The report will examine how far the global community has moved in turning the new development agenda into tangible progress for women and girls, and what is needed to bridge the remaining gaps between rhetoric and reality. The results of the UN Women-World Bank research will also be published in a forthcoming brief .